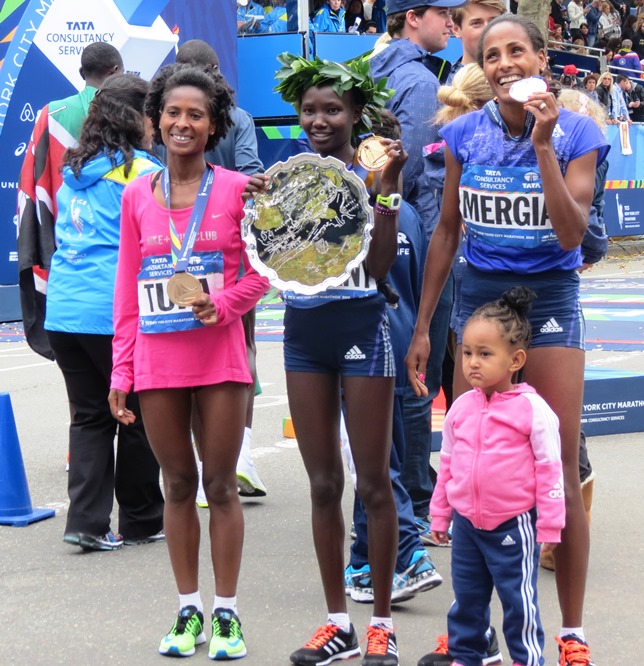 “I was planning to be ready to be tough,” Tufa told reporters after the race.

Keitany, the #2-ranked marathoner in the world last year by Track & Field News, got her revenge at the TCS New York City Marathon last November, running away from the field in the final 10 kilometers, relegating Tufa to third place and winning by nearly a minute and one-half.

“What I can say is that I was very confident in coming to New York City Marathon,” Keitany told the media after the race. “I wanted to come and try to defend my title.”

Tufa and Keitany will again meet at next April’s Virgin Money London Marathon, organizers announced today.  The April 24th race features a star-studded field where Tufa and Keitany are only the tip of a massive iceberg of talent.  Indeed, the elite women’s field boasts last year’s winners of the Berlin, Chicago, Dubai, London, New York, and World Championships marathons.  Five women have broken the 2:20 barrier, while a total of nine have broken 2:22.

“Tigist Tufa showed last year that predictions mean nothing in marathon racing when she beat all the favorites with a thrilling victory,” commented event director Hugh Brasher in a media release.  “This year’s line-up is no less exciting with five members of the prestigious sub-2:20 club all set to challenge the champion. With the Rio Olympics around the corner providing an extra incentive to all the elite runners, it is set to be another race to remember.”

The Virgin London Marathon is part of the Abbott World Marathon Majors series and will be the second event in the AWMM Series X which begins at the Boston Marathon on April 18.  The current series, Series IX, ends at the Tokyo Marathon on February 28th.