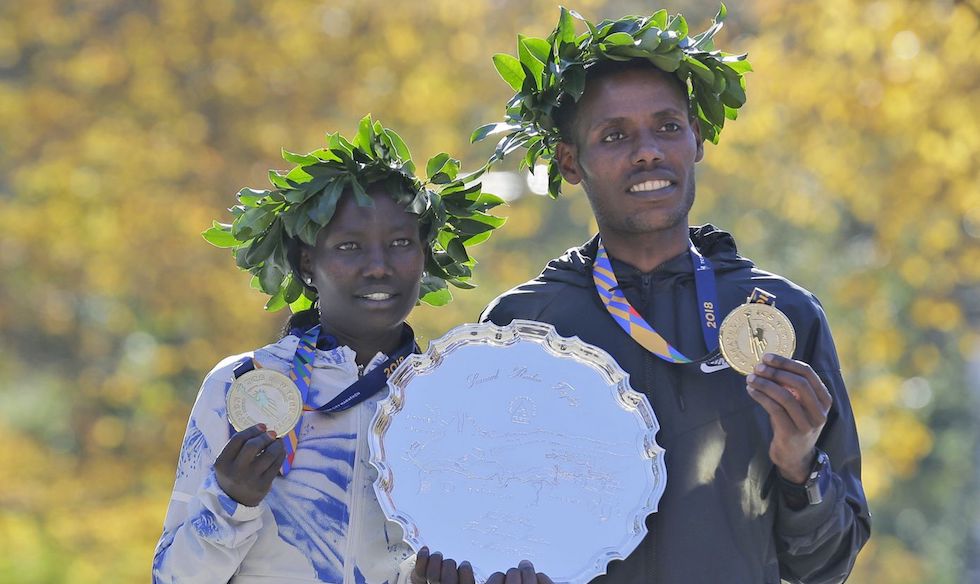 Desisa held off fellow Ethiopian, 22-year-old Shura Kitata, by two hundredths of a second to finish in 2:05:59. It was his first victory in New York and fourth podium appearance. He already had two Boston Marathon titles to his name.

“This is my dream to be champion in New York,” Desisa said. “I’ve participated here four times, and I’ve tried very hard to become the champion.”

Kitata was second in 2:06:01 – his second runner-up appearance in an Abbott World Marathon Majors race this year – and last year’s champion Geoffrey Kamworor of Kenya was third in 2:06.26.

Keitany became the second woman to win in New York four times, recording the second-fastest time ever in event history with a 2:22:48. It was her fourth win in five years, and she’s now the only woman other than Grete Waitz to win the event four times. Her training partner, Vivian Cheruiyot, was second 2:26:02.

“I was able to run a very nice race,” Keitany said. “I was just thinking of trying to win, but not actually the course record. But I came to see that I missed just by 70 seconds. But for me, winning was the most important.”

Last year’s champion Shalane Flanagan was the first of four American women to finish in the top seven, placing third in 2:26:22, which was 31 seconds faster than last year. Molly Huddle was fourth in 2:26:44 – a personal best in her third career marathon – while this year’s Boston Marathon champion Des Linden was sixth in 2:27:51. Allie Kieffer recorded her second consecutive top-10 finish in the event in 2:28:12 to take seventh.

Earlier in the day, Romanchuk broke the tape in the men’s wheelchair division in 1:36:21. It marked his second Abbott World Marathon Majors race victory, coming less than a month after he won the Bank of America Chicago Marathon.

“It’s an amazing experience to be able to win two major marathons in a row,” Romanchuk said. “It still hasn’t sunk in yet.”

Switzerland’s Marcel Hug, a three-time winner in New York City, fell short of defending his title, finishing second in 1:36:22. Great Britain’s David Weir, racing the event for the first time since winning in 2010, was third in 1:36:23.

“I just gave everything I had left for that pretty little downhill in the park, and I was actually finally able to get away a little bit,” Schär “I still can’t believe it was enough.”

Five-time race winner and NYRR Team for Kids Ambassador Tatyana McFadden was second in 1:50:48, and the reigning Paralympic marathon champion Zou Lihong of China was third in 1:56:14.

Romanchuk and McFadden both earned bonus points on the Abbott World Marathon Majors leaderboard by being the first wheelchair athletes to pass the 20K mark – part of the new bonus points sprint competition for Series XII.

The TCS New York City Marathon is part of the Abbott World Marathon Majors, a series made up of the world’s six largest and most renowned road races – the Tokyo, Boston, Virgin Money London, Bank of America Chicago, and TCS New York City Marathons. Points are allocated to the top five finishers in each race, with the top three men’s and women’s finishers in both the open and wheelchair divisions earning prize money.

The TCS New York City Marathon is the largest marathon in the world and the signature event of New York Road Runners (NYRR), the world’s premier community running organization. The race is held annually on the first Sunday of November and includes over 50,000 runners, from the world’s top professional athletes to runners of all ages and abilities, including over 9,000 charity runners. Participants from approximately 140 countries tour the diverse neighborhoods of New York City’s five boroughs—Staten Island, Brooklyn, Queens, the Bronx, and Manhattan. Race morning also features the Rising New York Road Runners Youth Invitational at the TCS New York City Marathon, a race within Central Park that finishes at the same finish line being crossed hours later by the marathon field. More than one million spectators and 10,000 volunteers line the city’s streets in support of the runners, while millions more watch the globally televised broadcast. Tata Consultancy Services (TCS), a leading global IT services, consulting, and business solutions organization, is the premier partner of NYRR and the title sponsor of the TCS New York City Marathon. The 48th running of the TCS New York City Marathon is set for November 4, 2018. To learn more, visitwww.tcsnycmarathon.org.