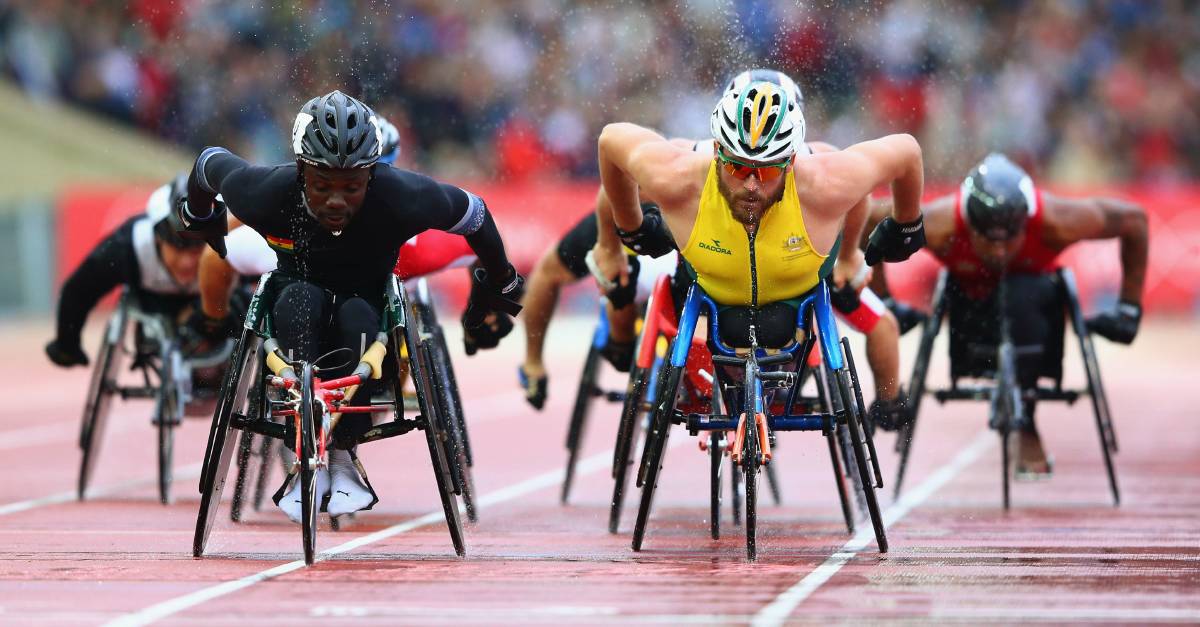 The announcement was made by Minister for the Commonwealth Games the Honourable Stirling Hinchliffe MP at a public event in the Southport Broadwater Parklands hosted by Olympic and Commonwealth Games swimming champion Brooke Hanson OAM.

The five-time Paralympian was born without the lower portion of his back, but has always been determined to achieve greatness, in and out of his racing wheelchair.

Aside from winning multiple marathons around the world, Fearnley has also crawled the Kokoda track and was a member of the crew of the 2011 Sydney to Hobart Yacht Race line honours winner Investec Loyal.

Fearnley is the fourth of a select group of high profile figures who will assist the Gold Coast 2018 Commonwealth Games Corporation (GOLDOC) with promotion of the 4-15 April 2018 Games to Australia and the rest of the world.

To mark the occasion, Fearnley was presented with a commemorative surfboard – an iconic keepsake of the Gold Coast lifestyle.

“It will be an historic Games, with the largest integrated para-sport program ever at a Commonwealth Games.

“It is a wonderful opportunity for para-athletes across the Commonwealth to compete at GC2018.”

“Kurt is a true Australian hero and I’m delighted he is on board as the fourth official GC2018 Ambassador.

“It is great to have an individual of Kurt’s calibre as one of the faces of the Games.

“Kurt is a leader in para-sports and world renowned for his sporting exploits on and off the track.”

Minister for the Commonwealth Games the Honourable Stirling Hinchliffe MP:

“Kurt is not just a decorated athlete, he’s also well respected as one our country’s greatest ever sports people.

“I know all Australians are looking forward to cheering on Kurt as he powers across the finish line at the first ever Commonwealth Games wheelchair marathon event on the Gold Coast.”

“Kurt is an inspiration to all athletes around the world and is a great addition to the GC2018 family.

“Alongside Sally, Cam, and Anna we have a strong team of ambassadors who are helping showcase Queensland and Australia to the rest of the world.”

“Each ambassador will be a role model for young Australians and the young people of the Commonwealth.

“Kurt is the ideal ambassador to champion the largest ever intergraded para-sport program at a multi-sport event, something unique to the Commonwealth Games, which adds an exciting aspect to GC2018.”

“It’s only fitting that Kurt officially joins the GC2018 family.

“He has been a strong supporter of GC2018 for a number of years now and is the ideal person to help promote our event.

“With the largest integrated para-sport program at a Commonwealth Games it was important to have an ambassador that represented the para-athlete cohort and Kurt is the perfect fit.

“I’m sure everyone will be excited to see Kurt go around one more time at a major sporting event, especially being on Australian soil in front of his family and friends.”

“Kurt has been a regular visitor to the city for the Gold Coast Airport Marathon and training camps.

“It’s an honour to have him on board to spread the word about the Games and our great city.

“The characteristics Kurt possess are ideal for promoting the Gold Coast 2018 Games and I’m excited to welcome him back for his last major sporting competition.”

“Kurt is a wonderful Australian athlete and role model.”

“He has paved the way for a new generation of para-athletes and inspired Australia with his feats on and off the field of play.

“It’s only fitting that Kurt takes on an official role with GC2018, his last major championships in the green and gold.”