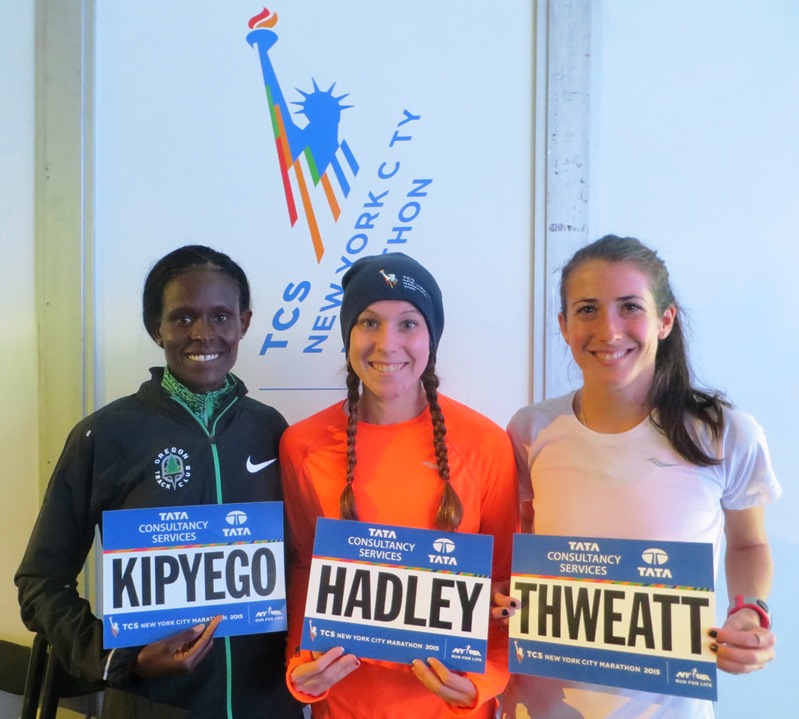 Less than 48 hours before the race begins, all three spoke with Race Results Weekly about their journeys to the starting line on Staten Island.

As an accomplished track and cross country runner, Kipyego knew that the natural progression of her career would eventually take her to the marathon. Over the last three years, the Texas Tech graduate and current Nike Oregon Track Club Elite member has wanted to cover the marathon more and more. She knew she was ready for the challenge in 2015.

Two days away from the main event, she paused and laughed a nervous laugh at the thought of running 26.2 miles.

“Ahhhh it’s a lot of mixed emotions,” said Kipyego yesterday before a hearty giggle. “I’m excited. I’m excited to be here, and definitely excited to debut and run a marathon. A little bit anxious, little bit nervous about what the body can handle. I don’t really know how the body is going to handle it, and I don’t know what to expect. But I have a lot of faith and I am committed!”

Training under coach Mark Rowland, Kipyego said she’s learned a lot about what her body can handle. Bumping her mileage up to 110 miles a week, Kipyego is covering distances at a pace she once believed was impossible.

“It’s been very new and exciting, because it’s thrown me out of my comfort zone for sure. I’m doing things I never thought the body could handle,” she said. “It’s been exciting in that aspect. It’s been funny watching my body react: first scream then kind of agree, and then less pain. It’s incredible how the body can adapt.”

All of the miles she logged in training –most with husband Kevin Chelimo who is also making his TCS New York City Marathon debut– have prepared her for Sunday, when she’ll join ten fellow Olympians in the elite women’s field. Instead of making a time or place goal, Kipyego’s goal is to battle.

For Thweatt, coached by Australian Olympic marathoner Lee Troop, the marathon was once a distance she scoffed at. Thweatt has seamlessly transitioned to marathon training by simply increasing mileage and extending her long runs accordingly. She’s embraced the challenge, and knows it will provide many benefits when she returns to the track in 2016.

Thweatt’s mentality entering the competition is unique, and speaks to her outlook on racing. She’s viewing Sunday’s race as an exaggerated and extended cross country race, something she knows she can handle.

“I think this is basically a longer cross country, that’s how I’m looking at it,” she began. “They definitely have many similar qualities that hopefully will play to my strengths.”

When she hits tough patches, Thweatt will dig deep and relate on her cross country experience to power through (she finished 29th at this year’s IAAF World Cross Country Championships in China).

“You really find out, especially in the later stages of the race, who you are as an athlete and whether or not you have the fight and that strength to keep competing regardless of how the race is going,” she said. “I know it is going to be tough, but again I think a course like this will really play into my strength in just being able to get in a rhythm and grind it.”

Unlike Kipyego or Thweatt, Hadley has completed the marathon distance before. Transitioning to the marathon as a young teenager, she achieved the U.S. Olympic Trials ‘B’ Standard by running 2:41:55 at the 2013 Indianapolis Monumental Marathon, then improved to 2:38:34 on the same course a year later.

But Hadley’s always wanted to run here, where her professional career began at the 2010 NYRR Oakley Mini 10-K in Central Park. She’s had November 1, 2015, circled on her calendar since she was 12 years old living in North Carolina.

“The fact that it’s finally here is really, really exciting!” she said. “As soon as I turned 18, I asked my dad if I could e-mail them [to see if she could enter].”

Hadley hopes to better her personal best, and knows she’ll have a large support group behind her. She enters the race with the fastest marathon time by an American woman, and is aware her entire college community back at UNC-Charlotte (professors included) will be tuning in to ESPN to see her compete.

“My main goal is to be able to put 100% of myself out there, and make sure that I leave everything and anything that I possibly can, get it all out on the field and have nothing left when I finish,” Hadley said. “My hope is that is an ‘A’ standard (2:37:00 or better) and a PR. However, if I know I’ve given it everything I can and I’ve run to the best of my ability, then I’ll be happy with whatever time that race is.”

While Hadley has fast marathons under her belt, she’ll be a newcomer on the streets of this city, just like Kipyego and Thweatt. Up for a challenge, the trio are looking forward to Sunday.

“It’s a tough marathon, it’s a grind,” said Thweatt, putting the challenge into perspective. “But it’s just about racing the race and being competitive!”