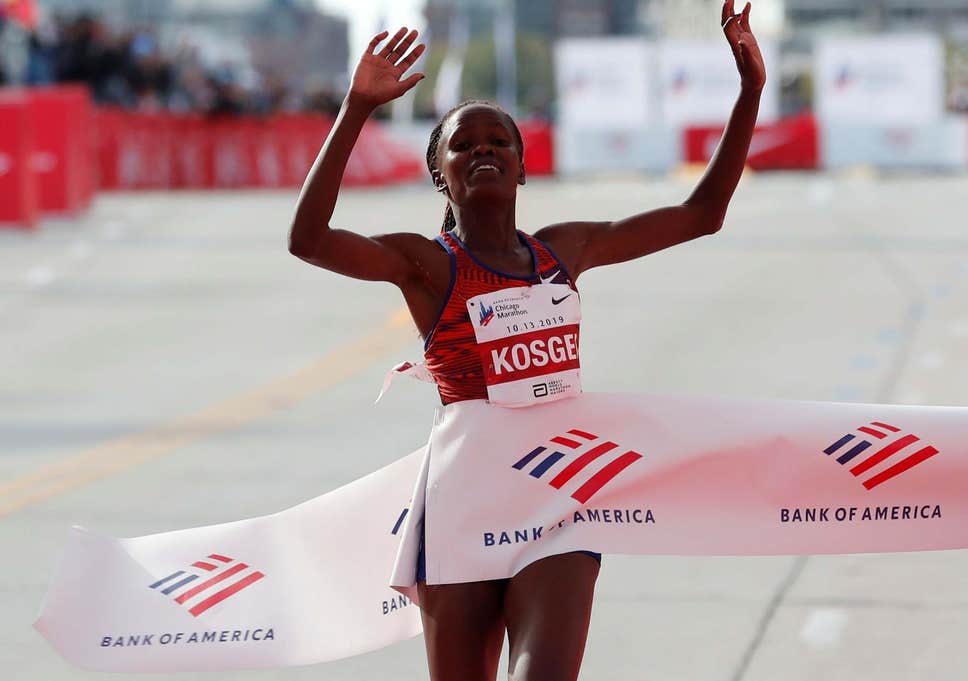 Kosgei’s run came little more than 24 hours after fellow Kenyan Eliud Kipchoge became the first man to cover 26.2 miles within two hours, clocking 1:59:41 in Vienna. Unlike Kipchoge’s performance, though, Kosgei’s mark was set in an official race on a record-eligible course.

Kosgei, who won in Chicago last year in 2:18:35 and improved her PB to 2:18:20 to win in London earlier this year, set out at a blisteringly fast pace, covering the first 5km in 15:28. Ethiopia’s Ababel Yeshaneh was dragged through the section in a swift 15:36 with Gelete Burka a further 27 seconds in arrears.

Her pace dropped slightly after that initial enthusiasm but the 25-year-old settled into regular 16-minute splits for each five-kilometre segment. She went through 10km in 31:28, 2:12:26 marathon pace, and 15km in 47:26. At that point she was almost a minute ahead of Yeshaneh, who herself was on schedule for a 2:16:00 finish at that point.

Kosgei’s half-way split of 1:06:59 suggested a finishing time of about 2:14:00. Fewer than five kilometres later, her lead over Yeshaneh had grown to two minutes, reaching 25km in 1:19:33. As she continued to run behind two male pacemakers, Kosgei added another minute to her lead thanks to a 15:45 split between 25km and 30km.

Another sub-16-minute five-kilometre segment followed, this time 15:56, and her 35km split (1:51:14) still indicated a finishing time about a minute inside Paula Radcliffe’s world record of 2:15:25, set 16 years ago. Given the speed she was going and how far into the race she was, she looked relatively comfortable too.

Nearly four-and-a-half minutes behind, Yeshaneh had a 33-second margin over Burka but both women were also on course for a personal best.

The race, though, was all about Kosgei’s world record attempt and she showed no signs of fading in the closing stages. The pace makers peeled away before the final two miles as Kosgei forged on alone.

With about 20 seconds left of running, she couldn’t help but smile as she realised the magnitude of what she was about to achieve. Moments later, she crossed the line in 2:14:04 to take 81 seconds off the longest-standing marathon world record – men’s or women’s – in the post-war era.