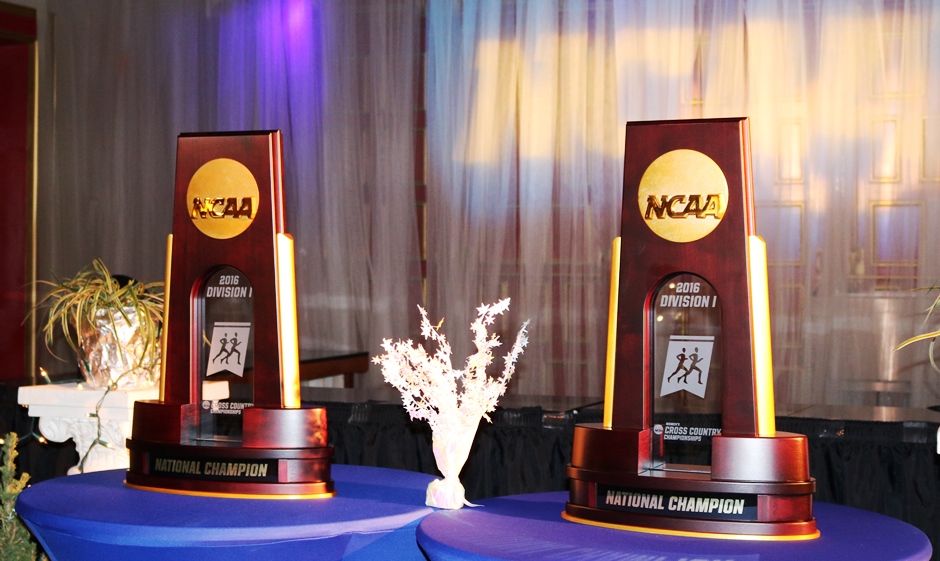 TERRE HAUTE, IN, USA (18-Nov) — The NCAA Division I Cross Country Championships are fewer than 24 hours away. Sixty-two teams are eyeing the sleek national championship trophies, while a select number of athletes have a shot at taking the top spots and joining the exclusive club of individual champions. So, what’s left to do between now and when the gun fires at the LaVerne Gibson Cross Country Course here?

Nothing but rest, relax, and get rid of any lingering anxiety, said coaches Race Results Weekly spoke to here last night.  That is probably easier said that done.

“I’m not much for talks. Just keep them laughing, keep everything light. They know what’s at stake and they want it way more than I do,” said Syracuse coach Chris Fox last night at the Blue Carpet Event, pre-meet team and VIP gathering at Indiana Theater. A former elite athlete with a 27:53 10,000m personal best, Fox guided the Orange to a nine-point national title win over Colorado last year.

In 2015, NCAA’s couldn’t have gone any better for the Orange. Canadian sophomore Justyn Knight led the way by placing fourth, while the rest of the Orange’s five scorers all finished in the top 50. Last year Syracuse attended the Blue Carpet event, and this year they did the same trying to recreate the same magic that lifted them over Colorado when these championships were in Louisville, Ky. While on the blue carpet, Fox said the event is just one way to help athletes enjoy the moment and stay calm.

“It makes the meet experience good, it keeps them from sitting in the hotel room thinking about the race. We did all this last year and we won, so we’re going to repeat it,” he said.

The saying ‘if it ain’t broke, don’t fix it’ could describe both Fox and Villanova coach Marcus O’Sullivan’s mindset heading into the meet.

In his 19th year guiding Villanova, O’Sullivan has been to nationals with individuals and teams, rookies and veterans. This year he’s got Australian Olympian Patrick Tiernan and freshman Andrew Marston competing.

“It all depends on who the athletes are,” O’Sullivan told Race Results Weekly. “In my case with Patrick Tiernan, very advanced maturity-wise in terms of how he approaches things, I don’t give him any instructions at all. The young kid, Andrew Marston, he’ll need a little bit more but not until the day of the race or night before, [just] make sure they get plenty of sleep and not make them too jittery. I’ll make them more jittery.”

As for the race itself, O’Sullivan’s philosophy is less is more.

O’Sullivan’s strategy has worked in the past.  He won the 1998 women’s national team title when he still coached Vilanova’s women’s squad, and Tiernan placed second in the individual race in 2015.

Another veteran coach, BYU’s Ed Eyestone, chooses to remind his athletes that this moment is a privilege and has been the goal all year long. As such, the meet should seem like a fun opportunity and not a nerve-wracking test.

“Try not to do anything differently, another day at the office,” Eyestone said. “Just get in, you’ve been doing good things all year long and just try to do what’s brought us success so far. I think as long as you don’t change things up too drastically you’ll be fine.”  His men come into the meet ranked fourth and the women are 28th.

With a women’s team that ranks 11th and one of the top contenders for the women’s individual title, sophomore Anna Rohrer, Notre Dame coach Matt Sparks has one message: Stay true to yourself, and believe.

“Do the same thing you’ve been doing every time out for the last two months. A championship time is not a time to re-invent yourself. Just keep doing what you’ve been doing and you’ll be fine,” said Sparks, who coached 2015 individual champion Molly Seidel who returns to the team for the indoor season in the winter.

The NCAA Division I Cross Country Championships will be held here on Saturday for the 79th time for men and 37th for women.  Held on an all-grass course, men run 10-K and women 6-K.  Last year’s champions were Edward Cheserek of the University of Oregon –who has won the last three editions– and Molly Seidel of Notre Dame, who is not competing this year.  The event will be broadcast LIVE exclusively on Flotrack.  Go to Flotrack.org to find viewing information.