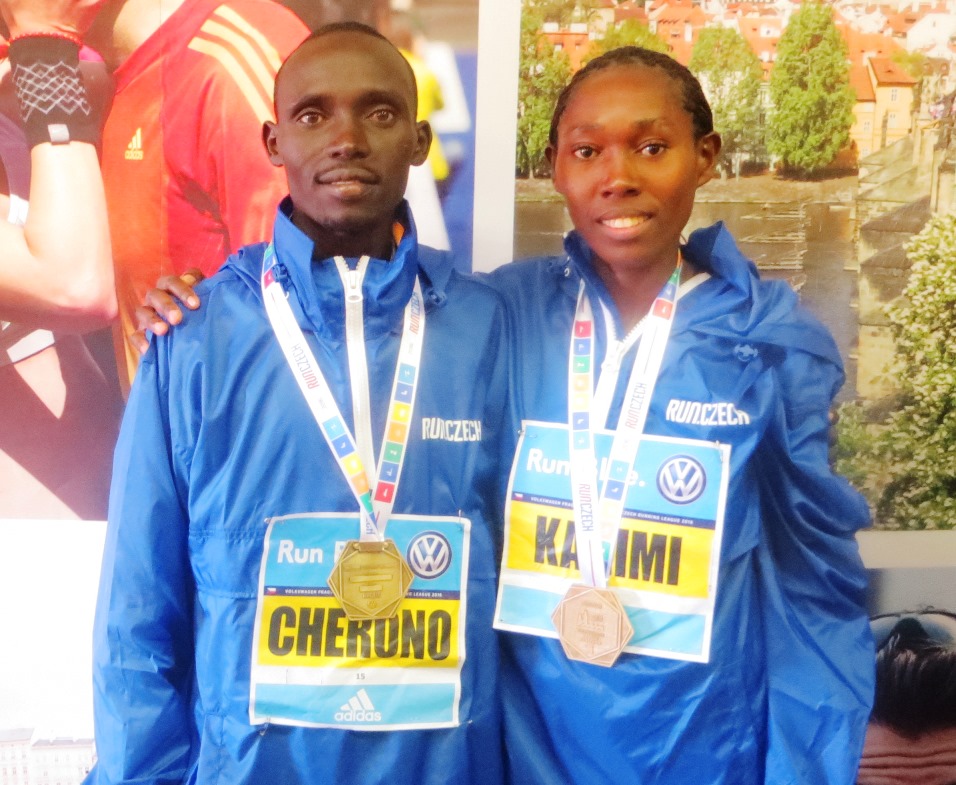 PRAGUE (08-May) — In a pair of fantastic duels over the bridges and cobblestones of the Czech capital city, Kenyans Lawrence Cherono and Lucy Karimi prevailed as champions here at the 22nd Volkswagen Prague Marathon, finishing with times of 2:07:24 and 2:24:46, respectively. Each entered Old Town Square alone after dispatching with their challengers in the final kilometers, giving Kenya a sweep of the top spots for the fifth time in race history.

Reaching halfway in 1:12:34 as part of a lead pack of six, Lucy Karimi was a bit worried. The temperature was gradually rising into the mid-60s (18C range); the cobblestones beneath her feet had partially zapped her legs; and her competitors were looming large alongside. Yet Karimi, 29, refused to fade.

The decision to stay up and push the pace with compatriot Purity Cherotich Rionoripo and Ethiopian Marta Lema was vital, proving to be a major factor in the outcome of today’s race. Luckily, Karimi also had two men to key off of and push the pace with, one of which was Czech Robert Krupicka.

Past Charles Bridge and along the Vltava River, Karimi kept the pace consistent and tried to conserve as much energy as possible. She routinely tucked in behind the taller Krupicka, disappearing from the television camera’s view.

From 30 to 35-K (18.6 to 21.7 miles), Karimi and Rionoripo split that 5-K segment in 17:13, a tempo too hot for Lema to handle. Pre-race favorite Biruktayit Eshetu dropped even sooner and was seen walking along the river roughly 23-K into the race.

“The girls were so strong,” said Karimi who finished second at the Honolulu Marathon last December. “I didn’t know I could be a winner, and I wanted to push through the last kilometers.”

Despite slowing a bit, Karimi and Rionoripo ran side-by-side through 40-K in 2:17:25 (a 17:22 split). Right then and there Karimi surged, gaining a step on her rival. But Rionoripo responded with a punch of her own, one that some thought would be the knockout blow to Karimi’s chances.

Yet as so often is the case in the marathon, the unexpected happened. With roughly a kilometer remaining, Rionoripo hit a wall. The 2009 World Youth champion at 3000m got sick, throwing up some of her fluids.

Karimi took advantage of Rionoripo’s misfortune, surging with a fiery sprint. That was all it took to break Rionoripo’s will.

“That athlete was so strong. At 40 kilometers she take water and then started vomiting, and so I started to kick and then I saw the finish,” said the quiet Karimi, speaking with compassion for her competitor. “I didn’t know that I could win today.”

“I knew the finish line was near and I still didn’t know if I could be a winner because she was so strong. I am surprised [I won],” said Karimi. For her win, Karimi earned a giant key to a new Volkswagen. She said the win was extra special considering Prague was the home city of her late manager, Zane Branson, who died unexpectedly last year.

“It’s an honor,” she said with tears in her eyes before walking away for a moment to herself, consoled by manager Davor Savija.

While Karimi’s victory was impressive, the Czech Republic’s Eva Vrabcova Nyvltova may have had the most breathtaking run on the day. In her marathon debut, the three-time Winter Olympian in cross-country skiing finished sixth in 2:30:10, likely qualifying for the Rio Olympics. Vrabcova Nyvltova ran a savvy race, sticking with a group of men through halfway in 1:14:17 before picking athletes off one by one.

“It was an absolutely amazing experience, especially because the visitors were supporting me and the crowds were helping me throughout the finish line,” she said through a translator. “This was a very strong experience and I believe that I will never forget it ’til the end of my days.”

In her post-race remarks, Vrabcova Nyvltova confessed that by making the Olympic standard of 2:45:00 she lost a bet to her physiotherapist. Now she must buy her physio a dog.

“I’m not absolutely sure where to buy a dog, so if you have any suggestions can you please give me them,” Vrabcova Nyvltova jokingly asked members of the media as she held her snow-white Samoyed dog named Bella. “Do you know any places I can get a dog?”
LAWRENCE CHERONO PROVES TOO MUCH FOR DEFENDING CHAMPION FELIX KANDIE

The Prague course features six bridges between the start and finish in Old Town Square. The final two bridges played host to a pair of key moves that helped give Lawrence Cherono the biggest marathon victory of his career.

Nine men went through halfway within a second of the lead in 1:03:06, including Cherono and reigning champion Felix Kandie. Some nine kilometers later at 30-K, eight of the same men were still together; the only one to drop was Peter Kirui.

It was between 30 and 35-K that the race was broken wide open by Solomon Kirwa Yego, surging across the Manesuv Bridge. The 15:10 segment served to dwindle the pack down to three: Yego, Cherono, and Kandie.

Approaching the final bridge of the course at 37-K (23 miles), Cherono and Kandie served-up another surge. The pair came off the Libensky Bridge and prepared for a fight along the Vltava River.

As quickly as the duel began to take shape, Cherono left Kandie in his wake. Up a slight incline, the defending champion couldn’t quite handle the energy Cherono possessed. In roughly 400 meters, Cherono built up an 18-second lead.

“I was having a little panic because sometimes you can go alone until the last minute and someone could come and pass you. I had to worry,” he said. “I am very happy because I am the champion. I was so excited. I was very much excited because I think that I could go out and win the race.”

Cherono trains in Eldoret with partners Paul Lonyangata and James Kwambai. He said the that a mixture of speedwork and tough fartleks got him prepared for anything come race day.

“You can apply everything you’ve done in training. You can try to push a little bit then see if my opponents can resist that pace or they can drop out. I did a lot of speed work. The fartleks, the speedwork, together. That’s it. That’s how I won,” he said.

Daniel Wanjiru was fourth in 2:09:25, the last man to dip under 2:10:00. In total, only seven men broke 2:15:00, an indication of how much the weather took its toll. Among those to drop out were two-time TCS New York City Marathon champion Marilson Gomes dos Santos, as well as Czech favorites Jiri Homolac and Jan Kreisinger.

Winning the Czech national marathon crown for the second time since 2014 was Petr Pechek in 2:22:14. He was 14th overall.

The day’s festivities kicked off with a family minimarathon for kids, which saw 2,000 children participate. The event was part of RunCzech’s celebration in the lead up to Global Running Day, Wednesday, June 1.