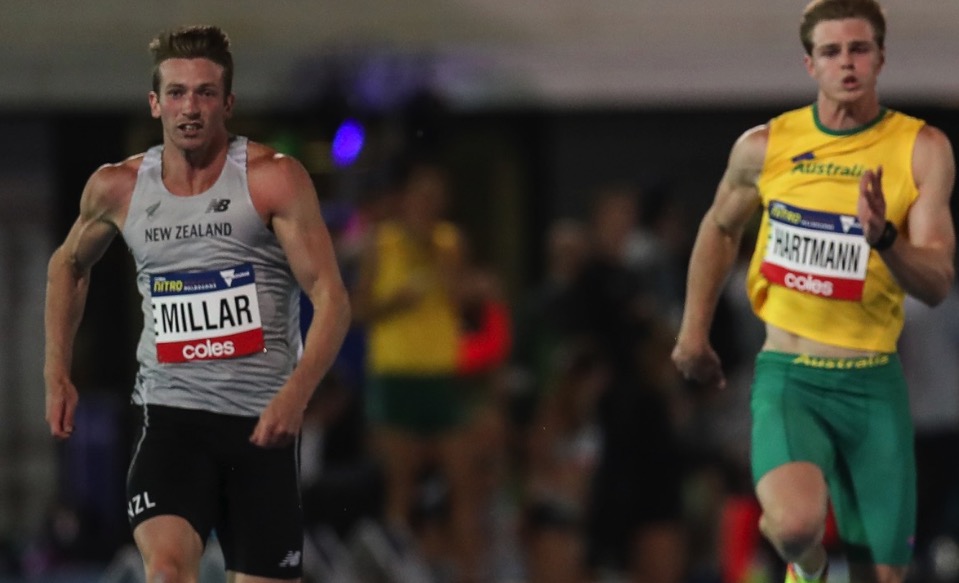 Joseph Millar ran an excellent race to win the men’s 200m Commonwealth Games trial in at the Capital Classic meeting, recording 20.68. The winning time was just 0.24 outside the Games B standard. Second was William Smart in 21.55 while Alex Haye finished third in 22.12.

The meeting was relocated from Wellington to Whanganui due to delays in laying a new track surface in the capital. Whanganui officials changed the track configuration for the 200m trials races which meant the athletes were not forced to run into the strong head wind, but the strength of the tail wind was above the allowable at 3.0 m/s.

Nevertheless, Millar’s win was the best performance on the night.

The Tauranga athlete earlier ambled to a win in the Men’s 100m into a strong head wind, stopping the clock at 11.25, ahead of Scott Walker and William Smart both on 11.38.

Lucy Sheat from Marlborough took out the Women’s 200m trial equally convincingly recording a hand-timed 23.6 with an over strength tail wind. Fiona Centers and Anna Hayward filled the minor placings.

Angie Petty confirmed her position as New Zealand’s top female middle distance athlete with a convincing win in the 1500m trial in 4:20.75, ten seconds ahead of Esther Keown in second and a fast finishing Tina Faulkner in third place.

Petty was not happy with the time but running the whole race in the lead meant she faced the strong wind too many times to finish with a good time.

The men’s discus was won by Alex Parkinson with 52.19m while Commonwealth Youth Champion Connor Bell spun the under 20 implement to 54.93m.

Matt Walsh was out to a handy 6.90m in the men’s long jump while Emma Ryan had the longest throw in the combined shot put contest.

The Classic series and Commonwealth Games Trials return to Whanganui on Tuesday for the Cooks Classic and then move to Hastings for the Potts Classic on Saturday.