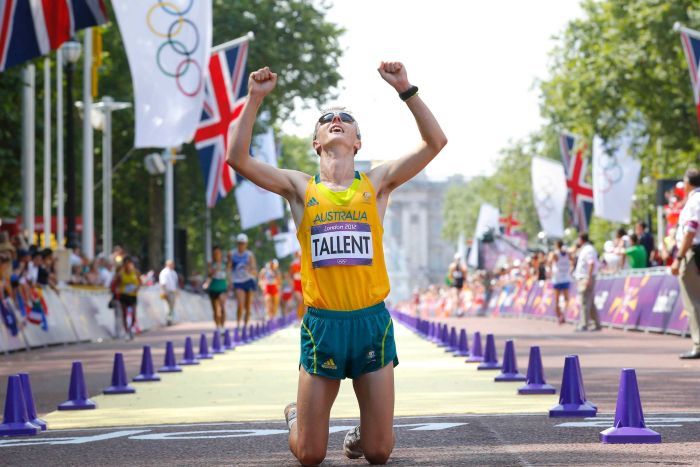 The ceremony in Taicang will represent the third time Tallent has received an upgraded medal following a competitor’s doping sanction. The 33-year old is currently waiting on the presentation of a 2011 World Championship silver medal following the positive test of 50-kilometre competitor Sergey Bakulin (RUS), likely to occur in Doha in 2019, followed by an upgraded 2012 Olympic gold medal, after Kirdyapkin exhibited abnormalities in his Athlete Biological Passport profile following the 50-kilometre race walk.

Tallent has maintained a dignified, yet determined voice against doping within the race walking community, “The details of the IAAF findings and subsequent sanctioning for the doping of Russian athletes are well known. I gratefully accept my 2012 gold medal on behalf of all athletes who strive for success in the best way possible. Clean, fair and with humility”.

Tallent finished second in Rome to Schwazer, as the former Olympic record holder returned to competition following a three and a half year doping ban having returned a positive test for erythropoietin, the banned red blood cell production booster, in 2012.

The medal upgrade ceremony is likely to take place following the Men’s 50-kilometre event, affording Tallent the opportunity to receive his medal and congratulations from his race walking peers.

“We are really pleased that Jared has the opportunity to attend the medal upgrade ceremony in Taicang this weekend, and receive recognition as the gold medallist for the 50km event at both the 2012 and 2016 IAAF World Race Walking Championships. Jared has had an outstanding career and is a terrific role model for young athletes in our sport” said Darren Gocher, Athletics Australia CEO.

When asked about the upcoming medal ceremony, Tallent proudly responded, “My 2016 gold represents years of sacrifice and dedication to the pursuit of excellence. I was unfortunately again robbed of the opportunity of standing atop of the victory dais and singing the National anthem. I will certainly be belting it out with pride on this very special occasion.”

Tallent has been one of Australia’s most successful athletes in the history of the sport and over the nine years from 2008 to 2016, he has won a staggering 11 global race walking medals. Saturday’s ceremony will act as a confirmation of Tallent’s competitive dominance over the last decade, a beacon of integrity and determination in the face of trying competitive circumstances.

Tallent’s medal upgrade ceremony takes place alongside the IAAF World Race Walking Team Championships in the Chinese city of Taicang this weekend, where Australia’s talented race walking squad step back onto the world stage after a tremendous performance at the Commonwealth Games.

The team will be spearheaded by newly crowned Commonwealth champions, Dane Bird-Smith and Jemima Montag who will contest the 20km walk events. Also, on the program is the 50km walk and under-20 10km walk events. Australia is sending a team of 14 athletes competing across five events over the two days of competition on May 5 and 6.

Australia’s team manager and interim high performance manager, Adam Bishop is looking forward to our prospects. “Australia has a proud history of success in international race walking. Both Dane and Jemima’s performances at the recent Commonwealth Games were outstanding and they lead a strong team in Taicang, which includes some fantastic emerging junior talent who look set to continue Australia’s success in to the future.”