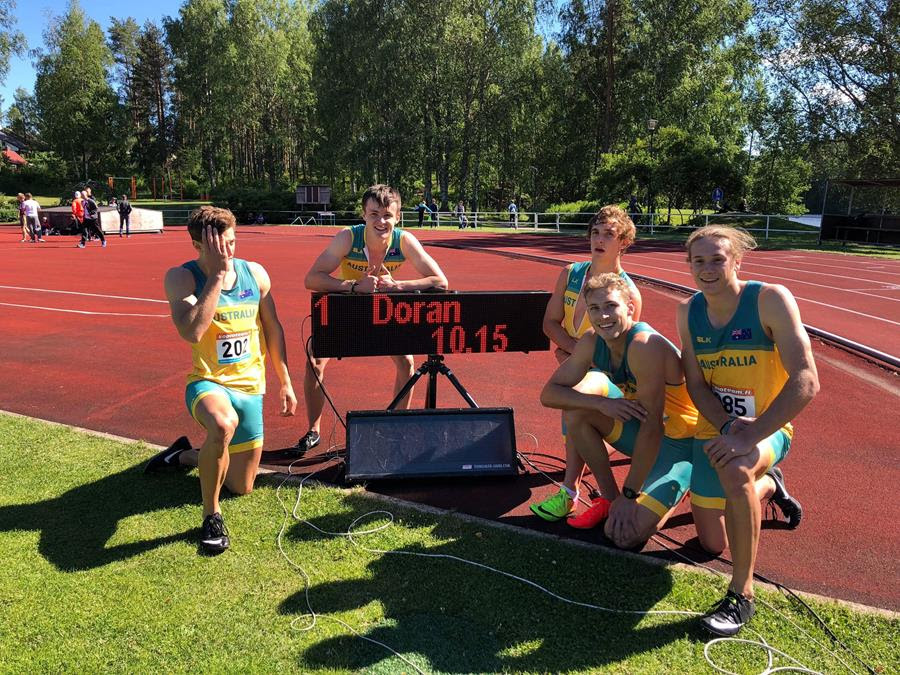 Ahead of the IAAF World U20 Championships, Townsville sprinter Jake Doran, just 17 years old, has smashed the Australian Under 20 100m record with a spectacular 10.15 (+1.5m/s) in Finland this morning.

Competing in the central Finnish city of Jämsänkoski, Doran’s time breaks Jack Hale’s national Under-20 mark of 10.21 set two years ago. The stunning time makes him the equal sixth fastest open Australian ever and now the second fastest junior in the world in 2018.

Doran was very surprised by his performance.

“I’m so stoked with how I went today. I didn’t think anything remotely like that would happen today, I wasn’t very hyped or feeling the greatest going into the competition so when I got a PB in the heat I was over the moon. I pulled up a little sore as I didn’t have much race fitness after my injury so I was just gonna try and win the final, but to come out and pull that time was absolutely insane. Completely out of nowhere.”

Doran was a late addition to the Australian team, after missing the 2017/18 domestic season due to injury and will run just the relay at the World U20s in Tampere next week,

His time has also taken him well past his coach and Olympian Paul Di Bella, who had a best of 10.26 as a senior.

But did coach-Di Bella consider such a time possible?

During his 10.47 race in March 2017, which was a heat at the national championships, he pulled his hamstring, but was still selected in the Australian team for the 2017 Commonwealth Youth Games where he was fifth in the 100m and won a gold medal in the mixed 4x100m relay.

A time of 10.47 at 16, meant he had the potential for senior Commonwealth Games selection. But that dream for the Gold Coast was soon over after Nassau.

“In October last year he was diagnosed with two lumbar stress fractures and needed six months of no training,” recalled Di Bella. It was more than his Commonwealth Games dream in tatters.

“He was heart-broken when he couldn’t do the Australian Junior Nationals to be selected for World U20 Championships.”

After the 2018 domestic season Doran returned to the track.

“We got back into training slowly and his goal was to race the other junior Australian athletes in Townsville in June, just to gauge what shape he was in, but off just 12-14 weeks training, on June 10, he ran 10.69 at the Student Games and All comers meet in Townsville.”

In Jämsänkoski this morning, most of the Australians ran 100m personal bests making the relay team for Tampere looking strong, especially after their snappy 40.07 today.