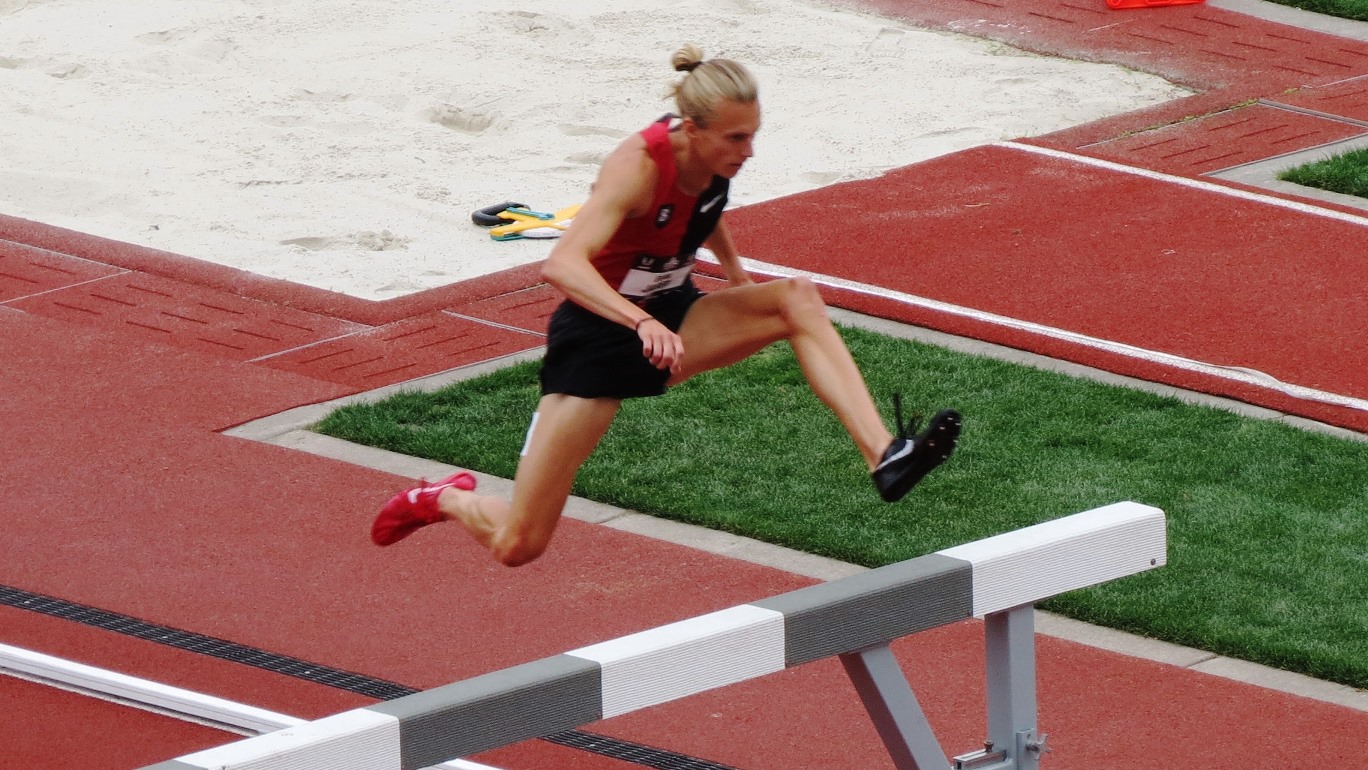 EUGENE, OR (03-Jul) — In what he hopes is a happy coincidence, Evan Jager will begin his quest for the Rio de Janeiro Olympic Games on the Fourth of July, exactly a year to the day that he clocked an American record 8:00.45 in the 3000m steeplechase. Reflecting back on that moment in Paris and the twelve months since, Jager laughs. He’s clearly relaxed and ready for Monday’s prelim, eyeing Friday’s final in the distance.

“I think it’s funny that I’m racing for the second year in a row on July 4th. I’m not putting anything into it because it’s a prelim, so I’m not expecting to run anywhere near the same time or type of performance I had last year,” he told Race Results Weekly in a telephone interview, joking about not going after the national record here. “It’s a funny coincidence, but I’m not reading into it at all… I’m excited. I’m definitely feeling really fit coming off of the best year of my career so far, so I’m definitely liking where I’m at right now.”

Speaking from the Nike Bowerman Track Club training camp at altitude in Park City, Utah, Jager spoke of the mental fortitude gained not only from that race in Paris a year ago, but also from the consistent workouts completed alongside teammates Dan Huling and Andy Bayer whom he hopes will be going with him to Rio.

When Jager won his first national steeplechase title at the 2012 Olympic Trials, he was admittedly a nervous wreck. Unable to sleep well for two months leading up to the Trials, he lined-up with apprehension and butterflies. Jager let the pressure get to him despite knowing he was in supreme shape.

“I’m in a different place from where I was at the last Trials. While I was still really fit and I ended up being pretty good in the steeple that summer, so much was still unknown that I was extremely nervous going into the Trials,” he said. “Being at altitude [this year] has helped us stay away from all the hype surrounding the Trials. I feel like for the whole team it’s been a lot more relaxed even leading up to the week before. It’s been really nice being up here. I think everyone’s really fit and everyone’s going to have a really good chance at making the team.”

Although times which Jager has clocked this year would give even the most seasoned veterans confidence (3:54.21 for the mile; closing a 8:15.26 steeple in a monstrous 57.3 seconds), it’s the workouts that have indicated something special may be in store. Jager isn’t at all concerned that he’s only run one steeplechase this year. On the contrary, he’s been able to tinker with his speed and ensure he’s fit when it matters most.

“I have gained so much confidence over the years from workouts in practice, so I had no reason to worry about getting in another steeple this year before the Trials. I’m totally fine with it,” he said.

Jager points to the race in Paris last July that reinforced his mindset that he belonged up in front of the best in the world –not just alongside or a step behind the vaunted Kenyans. Although he fell on the final barrier and finished second –losing perhaps two seconds and a valuable chance to break eight minutes– Jager’s American record was just the boost he needed to confirm his thoughts all along.

“The race in Paris last year, before that race I believed I could compete and beat those guys and run that type of time. But it wasn’t until actually running the race that I actually knew I could do it,” he said. “It’s a very fine line between believing you can do something and knowing you can do something. I got a huge amount of confidence from that race and I think the biggest difference between last summer and this summer is having the time to mentally cope with that fact.”

“I had a hard time mentally coming to grips that I was on that level and I put a lot of pressure on myself in a very short amount of time to back that Paris race up in Beijing,” he said. “I think having a full year to come to grips with that and think about that and realize what that actually means is going to help me out a ton. I’m ready for the mental game come later in the summer. If I do make the Olympic team I’ll be more ready mentally to be in that position.”

While Jager is the clear favorite to make the Olympic team, he’d like to be joined by Bowerman teammates Huling and Bayer. In 2009, Jager made the World Championships 5000m team with training partners Chris Solinsky and Matt Tegenkamp, calling it the thrill of a lifetime. To replicate that feat, sweeping the podium with some of his best friends and booking tickets to Rio, would be unbelievable.

Jager needs to take care of business here first, though. If he wins the title on July 8, he’ll take home his fifth consecutive national crown in the discipline. That would put him closer to Henry Marsh’s towering record of seven straight national steeplechase crowns (nine total) between 1981 and 1987.

What would that mean to the cool, collected 27-year-old?

“It would mostly mean and show how consistent I’ve been over the last five years. That’s one of my goals for my career, is to be consistently good across the board in whatever I’m running, and it’s just another step in the right direction,” he said. “I want to keep the streak alive as long as I can. I think five would be really cool, but it doesn’t hold a ton of significance. It just means that I could keep going and be able to go for it the next year. I want to make it as long as I can.”