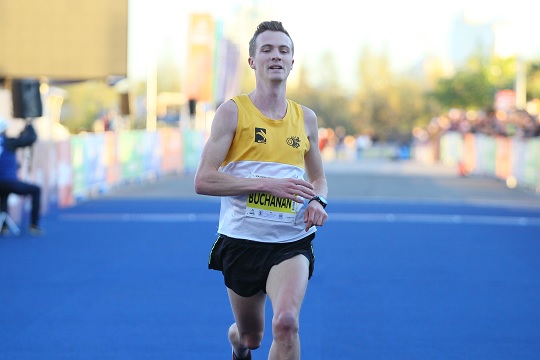 This Episode is proudly brought to you by lululemon. Athleisure brand lululemon and Movember, proudly unite for the third year of their partnership, to improve men’s well-being through movement, mindfulness and connection. Check out the lululemon x Movember Capsule collection at lululemon.com.au

Andy Buchanan guest hosts to talk about training post-Commonwealth Games and Melbourne Half.

Julian puts in another consistent week for his longest run since March.

Brad does not approve of Saturday morning sessions.

Jack Rayner won the Noosa Bolt 5K in a dominant 13:53, clear of Jack Bruce and Callum Davies on the podium, while Caitlin Adams won in 16:05 ahead of Lauren Ryan and Rose Davies. Steve Moneghetti ran 16:30, narrowly missing the 60+ WR by 2 seconds.

Cameron Myers pulls off a strong kick to take home the NSW 3000m Championships ahead of Adam Pyke and Will Lewis of Victoria. Holly Campbell took the title well clear of Aynslee Van Graan and Niamh Allen.

UTA100 Reece Edwards 8:10, on an altered course due to flooding, ahead of Scott Hawker and Sam McCutcheon, both of New Zealand. Anna McKenna won the women’s 100k, followed by Erika Lori just in front of Naomi Brown.

Ben St Lawrence won the 50K in his ultra debut ahead of Ronnie Spark and Piotr Babis of Poland, while Patricia McGibbon won ahead of Gemma Jenkins and Gillian Turnbull.

A post shared by Ultra-Trail Australia by UTMB (@ultratrailaustralia)

Olly Woolrych, Lululemon Ambassador and founder of the Vipers Run Club, joins the show to talk about More Than A Run, which invites running crews from across Australia to come together for this mental health initiative, and also talk about how running impacted his happiness and his epic run from Mexico to Panama.

Find out more at morethanarun.com.au

The first listener question from George asks what is the best running movie of all time, then Comm Games Medalist and World Age Group holder Krishna Stanton asks if anyone else feels hot spots from carbon-plated shoes before Moose goes through some of the new toys and training for his dog.