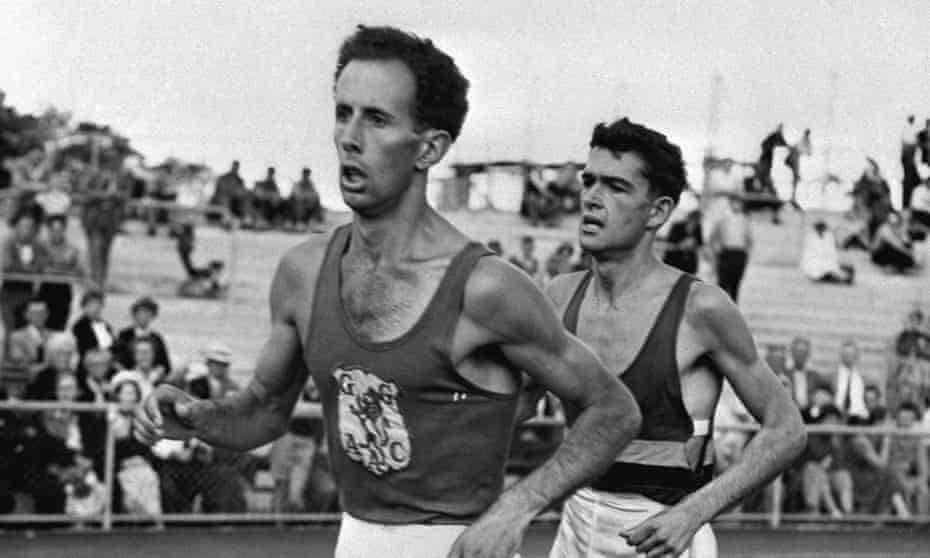 This week’s episode is sponsored by Pillar Performance. To find out more about their range of products, visit www.pillarperformance.com.au.

John Landy, the second man ever to run a mile in under 4 minutes, passed away on 24th February 2022, aged 91. John Landy set the world record for the mile 3:57.9 in 1954, setting the 1500m world record en route and set the stage for “The Miracle Mile” in the 1954 Vancouver British Empire Games against his rival Roger Bannister. Landy represented Australia in the 1952 & 1956 Olympics and won Bronze in the 1500m in Melbourne. One of the most iconic moments in Australian sporting history happened in the 1956 Australian National Championships where he stopped to pick up a fallen Ron Clarke, before catching the field ahead to ultimately win the race. John Landy also served as the Governor of Victoria from 2001-2006.

Brad finds a new lease on life training like an Ingebrigsten.

Julian puts his knee post-surgery through its paces on the Breakfast Creek Handicap.

Brady once again gets pulled up on the lack of hills.

Run The Bridge 10K in Hobart was won by Brett Robinson and Rose Davies, with the winners crossing the line within seconds of each other after women set off 3 minutes ahead. Andy Buchanan and Joel Tobin-White came second and third in the Men’s race while Charlotte Purdue and Natalie Rule joined the women’s podium.
Results

Listener Question asks about controlling the effort when the gun goes off, then Training Talk goes into the nuances of structure to the training and what type of workout intensities should feature in a typical month. Moose then makes a big announcement regarding a big purchase.

Chris Wardlaw, a two-time Olympian, multiple representatives and coach to runners such as Steve Moneghetti, Kerryn McCann & Craig Mottram and a stalwart legend of Australian distance running is this week’s guest.

“Rab” as he’s known as, talks with Brady about how he identifies himself, and recounts his his personal bests and the stories behind them, playing to the crowd for his 5k PB, equalling Ron Clarke’s 10k record and tying with Bill Scott to 2:11:55 at the 1979 Fukuoka Marathon.

Talking with Brady about the 1976 Olympics in Montreal, where he ran two 10Ks (as was the style at the time) and then the marathon, the significance of running down Prefontaine Drive, then getting the team to the 1980 Olympic Games in Moscow to maintain Australia’s uninterrupted run through the Olympics and the legacy that left, while recounting the heat and the humidity of the marathon in Moscow and watching the dawn of De Castella’s career.

Rab takes it back to his days at Monash Uni, having the epiphany to get back into running and training again, then going on to develop a system of training with coach Pat Clohessy incorporating mental relaxation, high volume and quality workouts as well as the power of the critical mass.

The talk then changes about his career as a coach, as the rightful creator of Deek’s Quarters and Mona Fartlek, Chris gives his observations state of marathon running in Australia, coaching Craig Mottram in the end of career, learning how an athlete thinks and the experience of Sydney Olympics as the head athletics coach.

This conversation rounds up on the possibility of an autobiography, balancing his athletic life with his current responsibilities on education boards, reflections on our performance in the Tokyo Olympics and taking that momentum forward.