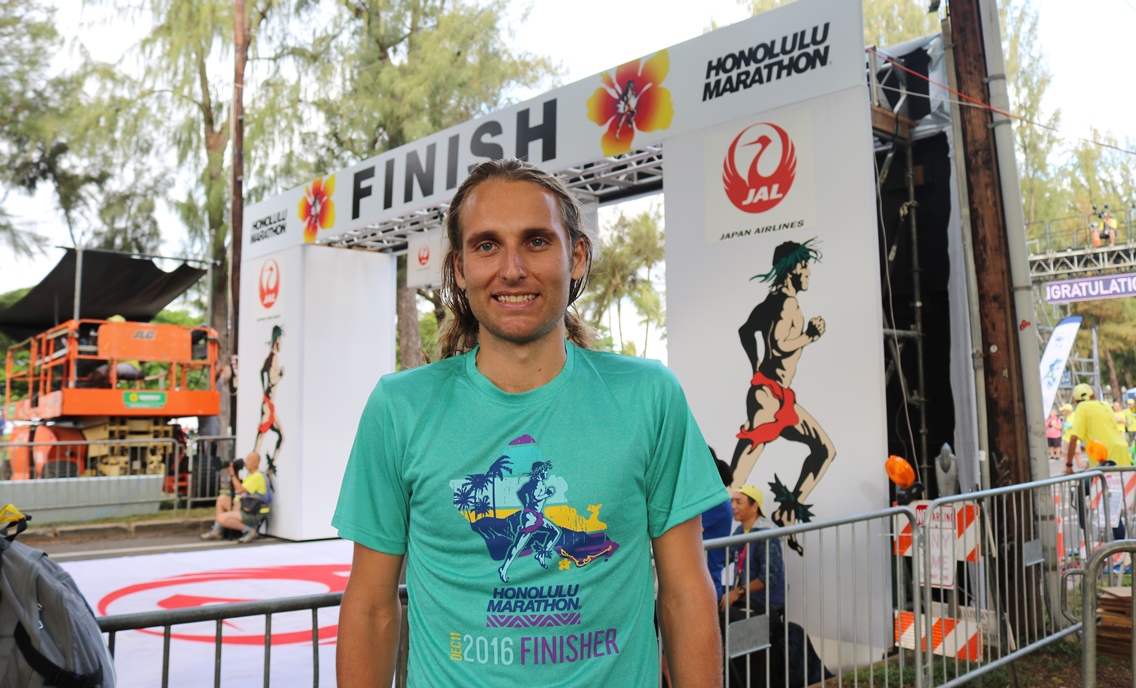 HONOLULU, HI, USA (12-Dec) — The saying goes that people will do anything for a free T-shirt.

“I had 35-K to do [as a long run] and I got to 35-K and I said I’m thinking about the finisher’s T-shirt,” Carson told Race Results Weekly with a laugh, wearing his finisher’s shirt. “I wanted that finisher’s T-shirt so I kept going. It was fun.”

Originally, Carson was here in Waikiki for the inaugural Kalakaua Merrie Mile, held a day before the marathon. Carson ran 4:09.4 to finish seventh in the handicapped gender-challenge race, a satisfying run for the Kiwi. He has a 1500m PB of 3:36.25 and mile best of 3:56.72.

Just under twenty four hours later, Carson crossed the marathon finish line to the surprise of everyone. Elite competitors, media members, and race organizers did a double take to see if the tall runner with a soaking wet pony tail was indeed Carson. It was.

“It was a nice course with the sun coming up. I managed to keep it going and had a good finish,” he said, trying to contain his amusement and laughter.

When told that he’d placed ninth in the field, just behind the race’s elite marathoners, Carson shook his head. “Crikey! Top ten in both, that’s good!”

After jogging to the start from his hotel, Carson started the race at Ala Moana Park with the sub-elites, tempo-ing through the opening miles with ease. He’d hit 5-K comfortably in 16:18 and 10-K in 32:19, running alongside American pro Nick Arciniaga.  Arciniaga was racing on a severely sprained ankle, and knew Carson was tempo-ing the early miles. He never thought Carson would ultimately finish the race.

“We caught him around [mile] 3 or 4, and we were trading the lead going back and forth. It was nice having company and working together,” said Arciniaga. “He trains with Nick Willis and Will Leer, and I’ve done tempo runs with those guys before so I knew he could keep it up for quite a ways. But I did not expect him to finish in the 2:27‘s. Honestly, that was super impressive, and coming off an almost four-flat mile yesterday. Pretty impressive… I was shocked.”

The toughest part of Carson’s marathon debut were the middle miles.

When asked if this was the first time he’d covered 26.2 miles, Carson quipped, “possibly last as well.” His next marathon won’t be for a long, long while.

“Definitely not on my horizon. There will be the track season coming up back home in New Zealand, so we’ll be starting up in late January, going into February, then heading back over to the states to do training with the Very Nice Track Club (Ann Arbor, Mich.) and hopefully qualify for the World Championships in the 1500m. If I can run a marathon I must be able to run a fast 1500m!

“It’s really early in the season and so it was just nice to be able to come over here and race yesterday. I managed to get two races out of the trip. It was great!”

Carson’s run even shocked his girlfriend, Annika Pfitzinger. Pfitzinger, daughter of American Olympic marathoner Pete Pfitzinger and the winner of yesterday’s Kalakaua Merrie Mile Open race, simply shook her head in amazement when her boyfriend finished. As she waited for him to complete a post-race massage, she couldn’t help but be amazed.

“It was all for the t-shirt!” she said. “He really, really wanted that t-shirt.”

Could Carson potentially be the next great Kiwi marathoner?

“I think Rod Dixon did that back in the day, moving from the 1500m up to the marathon and he did very well,” he said, referencing the 1972 Olympic bronze medalist at 1500m who went on to win the 1983 New York City Marathon and place tenth at the 1984 Olympic Marathon. “I don’t think I’m anywhere near that league soon, but it was good fun today!”