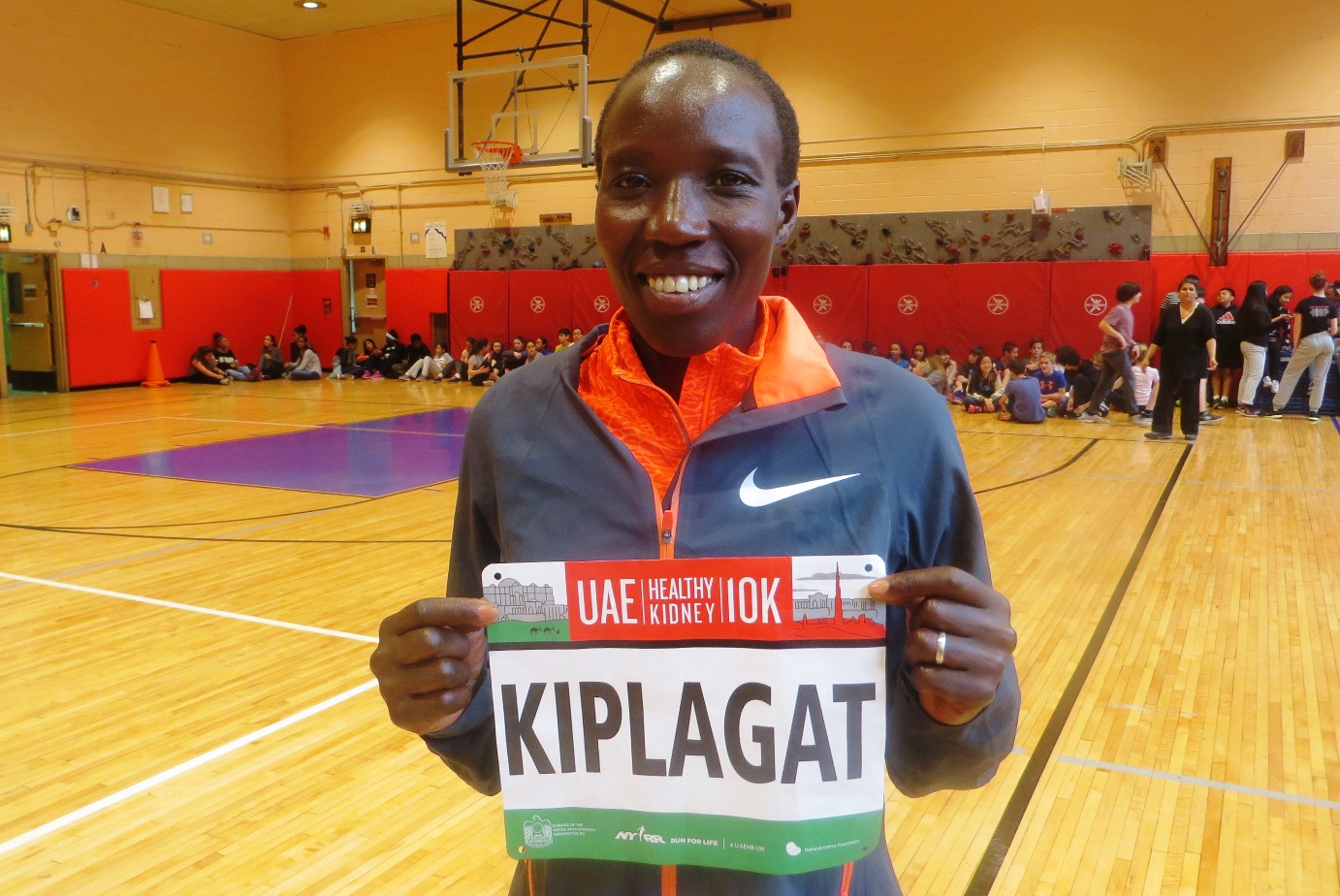 NEW YORK (13-May) — There are few athletes that have achieved more –and been robbed of more– in the sport of athletics than Edna Kiplagat. At 36-years-old, the Kenyan mother of five is back here to race the streets she’s very familiar with, competing in the 12th edition of the UAE Healthy Kidney 10-K tomorrow.

While Kiplagat’s focus, as always, is to compete for the win and finish on the podium, today she touched upon a global topic: The state of the sport, and its impact on future generations.

Speaking to Race Results Weekly after participating in a children’s running event at MS 245 School in Manhattan, Kiplagat’s tone went quiet when the topic of doping was breached. Long a proponent of clean sport, one is hard to find an athlete who has been denied and affected more than Kiplagat by the scourge of PED’s.

Winner of the 2010 TCS New York City Marathon, 2011 and 2013 IAAF World Championships Marathon, 2014 Virgin Money London Marathon, and the Abbott World Marathon Majors Series V, Kiplagat is one of the most decorated athletes in marathon history.

Yet it was the Abbott World Marathon Majors title –complete with its $500,000 bonus– which was initially robbed twice from Kiplagat by drug cheats. Russian Liliya Shobukhova originally claimed Series V, while Rita Jeptoo was –and still technically holds, until appeals are fully exhausted– the Series VIII crown.

Because of her kind nature and focus on family and competition, Kiplagat’s voice is rarely heard on the topic. She prefers to let her running do the talking.

Yet here, overlooking hundreds of children running about –perhaps the next generation of American runners– Kiplagat spoke from the heart in short sentences.

“I believe in clean sport, and am always motivated to run clean, and it is only my prayer that the young athletes who are coming up should stay clean and stay away from drugs so that we can bring back our image,” she said. “It is good because when we run clean, we have clean sport.”

On Thursday, it was announced by the World Anti-Doping Agency that Kenya has been declared as “non-compliant,” meaning that they will need to make improvements within their anti-doping infrastructure. The declaration of non-compliance does not, however, ban them from global competitions such as the Olympic Games and World Championships, according to the IAAF. Kenya will be monitored for improvement, though.

“I am motivated to push for clean sport because it is so disappointing if you try to run clean and then some athletes who are not clean…,” Kiplagat begins, before her voice trails off searching for correct words. Kiplagat wants to be diplomatic, and seems to fear coming across as bitter. Through her body language, though, it is clear how passionate she is about eradicating drugs within athletics.

For thirty seconds, Kiplagat focuses on the same sentence. She is trying to describe the situation she faced years ago, when Jeptoo denied her of glory. Yet the words come out only in spurts.

“It is a bit disappointing because when they don’t run clean… Somebody comes in and tries to run it… The problem is, the sport is not clean.”

Optimistic, Kiplagat believes that –slowly– things are being done to clean up the sport. While she was not selected for the Kenyan Olympic Marathon team, Kiplagat wishes the Rio de Janeiro Games will be on an even playing field. She gave her blessing and well wishes to the women and men who were chosen to sport the Kenyan vest in Rio.

“I think there is a lot of improvements, and I am wishing that they, I am seeing there is a lot of progress in wiping out the, I mean, cleaning the [inaudible] of anti-doping and I hope soon we will be having a clean sport,” she said.

As the conversation drifted towards tomorrow’s race, where she will face off against IAAF World Half-Marathon Championships medalists Cynthia Limo and Mary Wacera, Kiplagat began to smile. Kiplagat just wants to do what she knows best: race, and race clean.

“It feels great to be back in New York, especially this year. This is my first time running the UAE Healthy Kidney run, and I am happy to be part of the elite competition,” she said. “It’s good to have a competitive field like this. I feel it is going to be a fast one tomorrow, and I will try my best to run my best.”

Motivated by keeping the sport clean –and proving that she still has the speed and competitive spirit needed to be one of the world’s best– Kiplagat is ready to compete for the $25,000 top prize.

“The only thing I can say is that I run clean and will try my best tomorrow,” she said.