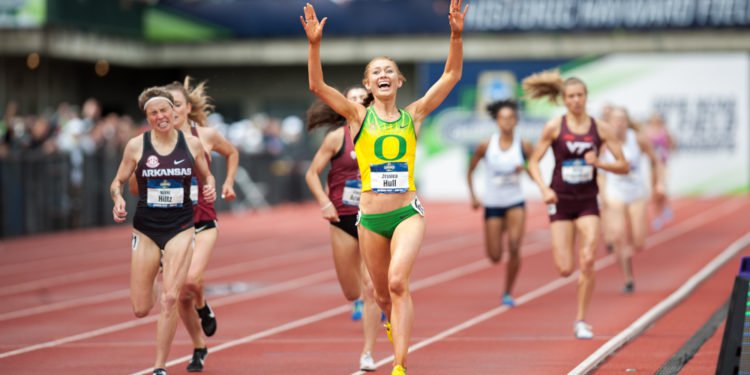 In the women’s 1500m, Albion Park girl Jess Hull, running for the Oregon Ducks, took out the 1500m with a new personal best time of 4:08.75.  Jess is the first Duck to win the title since 1984. In the final NCAA championship to ever be held on Hayward Field, before renovations commence, Jess won an honest race and had the following to say about the win

“I honestly like it playing out the way it did. It’s very fair. Everyone stays on their feet, and there’s not as much jostling. It’s a fair way to run, and it was awesome.”

In the men’s 1500m it was another Australian, Ollie Hoare, who triumphed.  Ollie unleashed one hell of a finishing kick to outsprint last years NCAA 1500m champ and NCAA record holder, Josh Kerr.  Ollie managed a 53.01 second last lap to win the race in a slowish, tactical, 3:44.77. Ollie left his run to the final stages, taking the lead with less than 50 metres remaining.   Running for Wisconsin, Ollie’s victory is the first 1500m win for the university since 1948. The men’s 1500m was stacked with Aussie’s with bright futures. Cam Griffith wasn’t far off the win, finishing in 8th with a time of 3:45.75, while Mick Stanovsek was back in 12th in 3:56.12.

And finally, MacKensie Little, won the women’s Javelin, with a massive throw of 60.36m. The throw moved the collegiate athlete to 6th on the all-time Australian rankings list. What a bright future is in store for this young Aussie.

In other news, Steve Solomon, Olympic 400m finalist from 2012 and 5-time Australian 400m champion, was run out in the heats. Solomon finished 4th in his heat with a time of 45.30 seconds, a season best. However, with the level of NCAA competition being as hot as it is, Solomon needed a sub 45 second run to progress to the final.