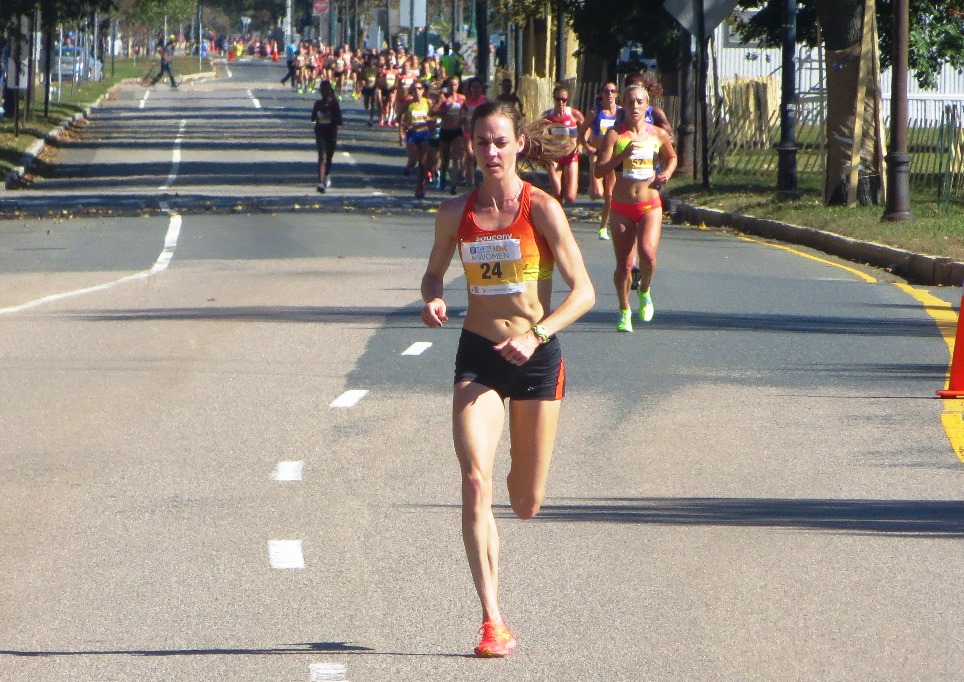 BOSTON (12-Oct) — Molly Huddle’s theme at today’s Tufts Health Plan 10-K for Women was plain and simple: grind. The 31-year-old had Shalane Flanagan’s 31:03 national record on her mind, something she wanted to eclipse on home soil here in New England. Though she’d ultimately come up short, Huddle’s winning mark of 31:21 was a course record, championships record and personal best. It was her fourth win at this event, and she collected her 19th national title.

“I was just grinding the whole way so that I wouldn’t slow down,” said Huddle, holding the winner’s wreath. “I have a certain goal for every race, and today it was trying to run fast.”

From the gun, Huddle and training partner Emily Sisson went to the front, splitting the mile in 5:00 with Ethiopia’s Sentayehu Ejigu a step behind. Crossing the Mass. Ave bridge with Boston’s sun-splashed skyline off her shoulder, Huddle continued to hammer step after step. She was alone a mere seven minutes into the contest, well out in front.

Huddle had hoped someone would go with her and keep the pace fast. Together, Huddle and Sisson –who both train under coach Ray Treacy in Providence– had planned to start off at five minute pace and see how long they could hold it. Yet Huddle was the only one who could keep that tempo, reaching two miles in alone in 9:58.

“It was just challenging. That’s pretty fast to do by yourself, so I thought I’d give it a go and see what’d happen,” she said. “I just looked down and tried to grind as long as I could. [Flanagan’s record] was on my mind, and I knew it would be a really tall order unless there was someone with me. But I thought ‘Maybe you’ll feel good and maybe you’ll be able to do it.'”

Through 5-K in 15:37, Huddle ran along the Charles River with an extra pep in her step. Her arms pumped a bit harder than usual, and her eyes stayed glued on the asphalt ahead; they would only lift when she tapped her watch each mile. By four miles, Huddle’s lead on Sisson was 19 seconds.

Taking the inbound turn back onto the Mass. Ave. bridge, Huddle hit a wall of sound. Women still making their way through the second mile screamed encouragement, cheering as loud as the famed women of Wellesley College during the Boston Marathon.

Despite the extra encouragement, Huddle couldn’t quite get back on national record pace. Whether it was due to the lack of a competitor alongside her or the lingering fatigue from last week’s 10 mile national championships (which she won in a national “best” of 51:44), Huddle simply said she didn’t have the extra gear needed to eclipse Flanagan’s mark.

Even so, she did put a shellacking on the competition. In the final mile, Huddle’s lead was greater than a city block. She’d zoom past the Public Garden and through the finish in 31:21, breaking Ejigu’s event record by twelve seconds.

“I’m just happy to win and get a road PR, so that’s nothing to be disappointed about!” said Huddle, who joins Lynn Jennings as the only athletes to have won this race at least four times (Jennings has six titles). Huddle took home a total of $12,050 thanks to today’s win. When noted that this was her 19th USA national title, she laughed. “I think that just means I’ve run for a lot of years now, which means that I’m getting a little further along in my career. But if you told me that 10 years ago that’s where I’d be now, I wouldn’t believe you. It’s pretty special.”

In her post-race interview, Huddle was quick to give credit to Sisson, celebrating her 24th birthday with a runner-up finish in 32:18. Sisson has quickly made the transition from collegian to professional, training alongside Huddle a majority of the time.

“I was happy to finish second to Molly. That was the goal going into today,” said Sisson. “I just know I am going the right path following them [Sisson and coach Treacy], so it’s really comfortable. The transition has been so smooth.

Rounding out the top three was Ejigu (32:37), with a healthy Kim Conley and Brianne Nelson completing the top five in 32:38 and 32:48, respectively.

“This year we had two different girls run this race and we still won,” said Matthews, noting that a year ago Jen Rhines, Matthews, and Juliet Bottorff made up the winning squad. “I think it speaks to our depth and that we can have three girls ready to go at any given time ready to win.”

For Bates, this race served as her professional debut. Despite battling illness earlier this week, she was encouraged with today’s showing.

“It was a whole different can of worms. It was really fast at the beginning and really hard,” she said. “I really started to move up the last two miles, but it was really hard. A really great experience. Very fun, tough, but good. I’m really excited for the next one and I think I’ll fare a little bit better.”

PHOTO: Molly Huddle jumps out to an early lead in the 2015 USA 10-K Championships at the Tufts Health Plan 10-K for Women (Photo by Chris Lotsbom for Race Results Weekly)