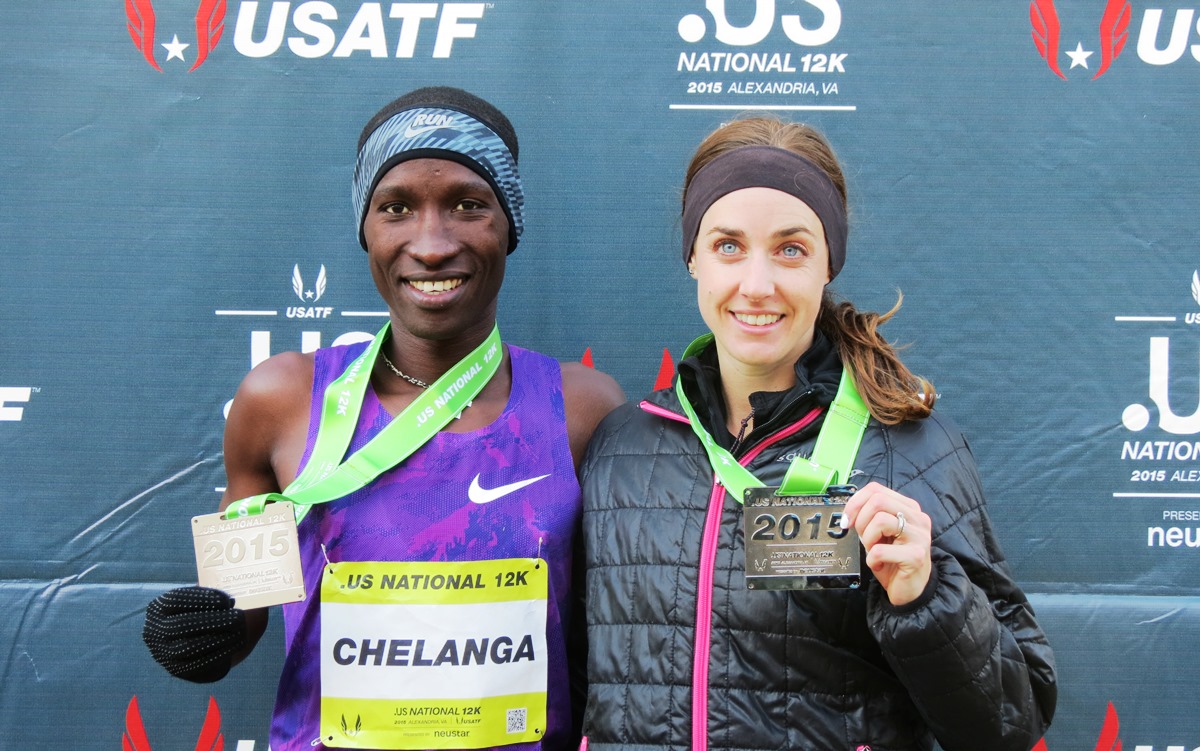 ALEXANDRIA, VA (15-Nov) — On a chilly and windless fall morning here, the 2015 USATF Running Circuit came to a close with victories for Molly Huddle and Sam Chelanga at the third edition of the .US 12-K National Road Racing Championships.  Huddle won for the third consecutive time, running away from the field early, while Chelanga won by a fraction of a second in tight sprint finish over Tyler Pennel. Both winners collected $20,000 in prize money plus Running Circuit bonuses.

HUDDLE OUT FOR A SUNDAY RUN

Huddle, 31, who had already collected six national titles this year, moved immediately to the front from start, hitting the one-mile mark in a brisk 5:10.  A large chase pack formed a few meters behind her, including Mattie Suver, Sara Hall, Alisha Williams, Kim Conley, Alexi Pappas, Liz Costello and Brianne Nelson.

As Huddle left Old Town adjacent to the Potomac River and began the out-and-back leg of the course on the George Washington Parkway, the rest of the field fell quickly behind.  Huddle’s lead was 13 seconds at the two-mile (10:19) and 18 seconds at 5-K (16:05).

“I was hoping to go for a good time, but I was a little bit too tired,” Huddle told reporters of her early move to break open the race.  “But, I knew if I kept pressing I’d build too big of a gap for them to catch me, hopefully.”

Huddle’s lead was never in jeopardy.   She strode confidently along the parkway, the quiet of the morning only broken by an occasional cheer from a fan and the honking of Canadian geese.

“This is like a Sunday run for her,” commented a photographer on the lead vehicle, Nelson Eng.

Coming back into Old Town, Huddle went through 10-K in 32:19, and breezed to the finish line adjacent to Founders Park in 38:36, her slowest winning time here.  Nonetheless, she won by a healthy 26 seconds, taking her 21st career national title plus $20,000 in prize money and another $20,000 for winning the overall USATF Running Circuit points title.

“We do a good amount of work on the roads; I feel at home there,” said Huddle as she analyzed her performance today.  “The mentality of just kind of grinding away is something I’m used to in practice.”

Behind Huddle, there was an exciting battle for the next two spots on the podium.  Four women –Hall, Williams, Conley and Nelson– were together at the 10-K mark (32:46).  Coming down the long finish stretch on North Union Street, Hall and Williams got in front of the other women, then Hall unleashed a strong sprint to clinch second in 39:02.  The snap in her legs was surprising considering that she had run the Bank of America Chicago Marathon just five weeks ago.

“Off marathon training I felt better as the race went on,” Hall told Race Results Weekly.  “The first mile was the hardest part of the race for me.  I’m really happy about it.”

Chelanga, who became a USA citizen just last summer, came into today’s race third in the USATF Running Circuit standings after strong showings in the USA 20-K, 5-K and 10-mile championships this fall where he finished second, fourth and first, respectively.  Training with champion athletes Bernard Lagat and Stephen Sambu under coach James Li in Tucson, Ariz., Chelanga was comfortable with the easy early pace (14:52 through 5-K) knowing that it might lead to a sprint finish at the end.

“We went out slow today,” Chelanga told reporters.  “You knew halfway through that this was going to be like a kick at the end.  And even like when we crossed the 10-K, and there were like five guys and I was like, whoa!”

Just as in the USA 10-Mile Championships last month, Chelanga found himself against 2014 USA marathon champion Tyler Pennel in the final surge to the line.  Pennel had broken four minutes for the mile earlier this year, while Chelanga’s best is only 4:03.  Nonetheless, the former NCAA star for Liberty University found a little more foot speed than Pennel, beating the Zap Fitness athlete by a step at the line.  Both men were timed in 34:25.

“That was hard,” Chelanga told reporters immediately after the race.  “Actually, I was thinking, ‘just give everything.’

While Huddle will take a well-deserved break (she’s been racing consistently since last March), Chelanga is in the early stages of marathon training.  He’ll make his debut at the distance at the USA Olympic Trails Marathon in Los Angeles on February 13, with hopes of making his first Olympic team.  Pennel will also be there.

“We’re marathoners now,” Chelanga said of he and Pennel.