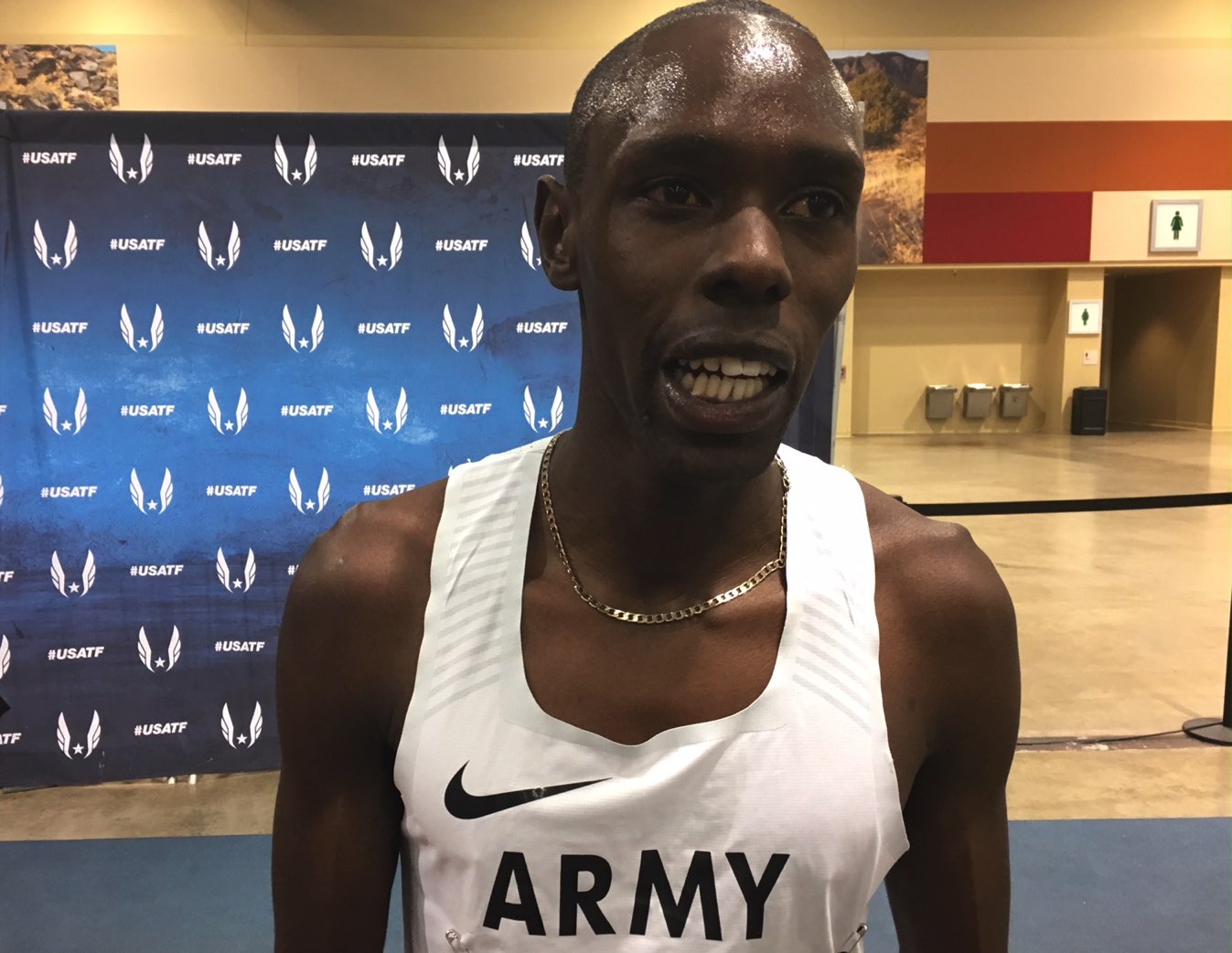 ALBUQUERQUE (18-Feb) — Less than 24 hours after winning the 3000-meter titles at the USATF Indoor Championships here at the Albuquerque Convention Center, Shelby Houlihan (Nike Bowerman Track Club) and Paul Chelimo (U.S. Army) stepped down in distance, and were once again unbeatable, winning the 1500m on the third and final day of these championships.  Houlihan replicated her feat from last year when she won both the mile and two-mile here.

Predictably, both contests were tactical.  However, the men’s race went out ambitiously given Albuquerque’s high altitude of 1619m (5312 feet), with the first 400 meters reached in 57.7 seconds.  Chelimo was sitting in fourth place in the 10-man field with one of his Colorado Springs training partners, Kirubel Erassa, on the lead.  Chelimo said that he was focused on getting his tactics right.

“The big goal today was to position myself well, and work on my tactics as I did yesterday,” Chelimo told reporters.

The pace would soon soften, and the field was bunched up with three laps to go.  Chelimo stayed in the front with key rivals Ben Blankenship (Nike Oregon Track Club Elite), and Craig Engels (Nike Oregon Project) marking him, closely.  With two laps to go, Chelimo was leading and was setting himself up for the final push to the line.  He was confident about his ability to close.

“I was just going to position myself well and go for the win,” Chelimo said.

For the last 400 meters, Chelimo was the race’s only leader.  Running 29.97-seconds for the penultimate lap, he blazed the last circuit in 26.46 to clinch the win.  However, he won’t be running the 1500m at the IAAF World Championships in Birmingham, England, next month.  Lacking a qualifying mark for that discipline, he is only eligible for the 3000m.

That’s good news for both Blankenship and Engels.  The two milers battled for the last two podium spots, and their placings weren’t sorted out until the last 10 meters when Blankenship –who had been in fourth place with 100 meters to go– moved into second on the strength of a 26.37-second final lap, the fastest of any athlete in the race.  His time was 3:43.09 to Engels’s 3:43.29.

“I worked all season,” the combative Blankenship told reporters.  “I was patient.  I came up and just did my work, and I thought, it’s a total waste if I don’t make this team. The last 100, 200 I thought, this is everything, or that’s it.”

Engels, who like Blankenship possesses the World Championships entry standard, will also be headed for Birmingham.  He looked more relieved than anything else, saying that the high altitude race didn’t leave him feeling all that well.

“I’m going to go throw up,” he said right before leaving the mixed zone.

Houlihan also won on the strength of her powerful kick.  Unlike Chelimo, she chose to run near the back of the race and wait to pounce.  Rachel Schneider (Under Amour) led through 1100m, running steady laps in the 35-second range, which kept the entire 10-woman field together.  With two laps to go, Houlihan was only in 8th position and got caught up a little in traffic.

“Going into, like, 400 (meters to go) it was a lot of like, kind of shoving, stepping on people, people stepping on me,” Houlihan explained.  “And, I really didn’t feel comfortable with my positioning at that point, but I was just trying to stick on the front.”

But like yesterday’s 3000m, it would all come down to Houlihan’s finishing speed.  In the final 100 meters, she had to swing wide to find a clear path to the tape, overtaking her own Bowerman teammate, Colleen Quigley, in the final 10 meters to get the win in 4:13.07 to Quigley’s 4:13.21.  Both women have the World Championships qualifying standard, but should Houlihan decide with coach Jerry Schumacher to only do the 3000m in Birmingham, third place Shannon Osika (Nike) would be eligible to get the next team spot.  The former University of Michigan All-American clocked 4:13.60.

“I was not expecting that one, but glad I could pull it off,” Houlihan said giddily.  She admitted that she felt a little guilty passing her teammate Quigley, though.  “I honestly did feel a little bad.  I know how bad she wanted to win that.”

The 800m finals went to form, with this season’s strongest athletes, Ajee’ Wilson (adidas) and Donavan Brazier (Nike), scoring solid wins.  Wilson ran a well-controlled race, leading through halfway in a modest 62.30, with Ce’Aira Brown (HOKA NJNYTC) and Raevyn Rogers (Nike) on her heels.  Wilson ratcheted up the pace in the penultimate lap, then upped the pace again in the final circuit as Rogers began to draw close.  Wilson held off Rogers, 2:01.60 to 2:01.74, to notch her fourth USA indoor title.  Rogers made her first national team and was elated.

“I’m so glad I made it,” she told Flotrack.  “I’ve been working hard, and I’m just really happy.”

Brazier ran away with the men’s 800m title, taking advantage of the fast opening 400 run by Erik Sowinski who needed to run sub-1:46.50, the World Championships qualifying time, in order to secure a team spot.  Brazier would win by over a second in 1:45.10, just one tenth of a second off of the USA indoor record of 1:45.00 set by Johnny Gray in 1992.  His was the second-fastest time ever indoors by an American and a championships record.

“I didn’t expect it to be that fast,” Brazier said after his victory.  He added: “But I think I at least got the meet record, so I’m happy enough with that.  I’d really like to get the American record, but I can’t complain.”

Drew Windle (Brooks Beasts), who had been training in Albuquerque for over a month, found himself in last place at the half-way point, and he appeared to be out of contention.  But the former high school football player from New Albany, Ohio, rallied in the final 100 meters, passing most of the field on the curve, then passing Sowinski in the homestretch to get second in 1:46.29.  He mad a small fist pump before he crossed the line, expressing satisfaction, but not joy.

“I didn’t feel great,” Windle admitted. “I wish I could have continued for the win, but the consolation is going to Birmingham for Worlds.  It’s good enough.”

In the sprint events this afternoon, Christian Coleman (Nike) set a pending world record for the 60m, clocking 6.34 seconds.