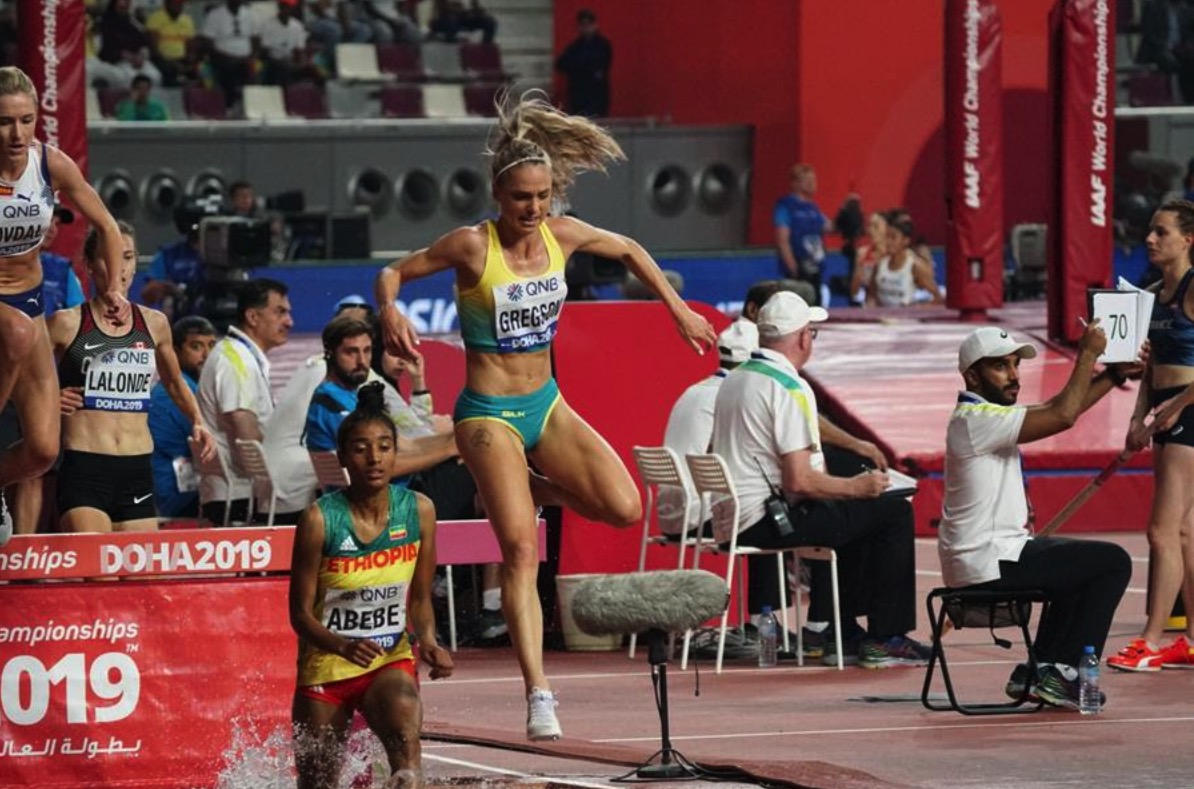 Genevieve Gregson put in a Captain’s performance to inspire the rest of the Australian team and secure her place in the 3000m steeplechase IAAF World Championships final.

Running a season’s best and Tokyo Olympic qualifying time of 9:27.74, Gregson said “It wasn’t the cleanest race I’ve ever done, I’d like to think that my experience could have handled it a bit better, but I think I was just a bit rusty.  But I’ve got a chance to go out there on Monday and I think I could improve on that definitely.

“Season’s Best and Tokyo qualifier, so I’ve ticked one of my boxes and goals this weekend. The second is being in the final and running my heart out and finishing on a high note for the season and making 2019 way better than I could ever have imagined.”

There was also a personal best for Paige Campbell, who clocked 9:44.80 for eighth spot in Heat Two, with Georgia Winkcup clocking 9:50.21 for 13th place in the final heat.

In the men’s 5000m Stewart McSweyn put in a ripper of a performance, finishing in a solid fourth place and secure his place in the World Champs final with a time of 13:20.58.

Speaking after he said “It felt good.  There’s always a lot of good guys in any heat so it’s never easy.  My aim was to get in that top five and you never want to leave it to chance, so I looked around when I was in fourth and new I wasn’t going to get run down, so I was able to slow down a little bit.  Hopefully that means I’ve got another gear come the final.”

In her first full season as an 800m runner, after switching from the 400m, Morgan Mitchell made sure of her place in the World Championships semi-final with a strong finish for third place.  Clocking 2:02.13, Mitchell said “I wanted to leave it all out on the track, and I did, so I am really happy.”

Speaking about her strong finish in the last 10m to get third place on the line she said “I’ve been feeling too good and feeling way to fast in training to let them run away, I knew I had a little bit left in the tank so I just went for it.  I’ve never dipped before and I thought surely this will get me across and I could see I’ve got it by a .01 or .02.”

With an automatic qualifying of 8.15m or top 12 finish to progress to the final, Henry Frayne narrowly missed out on making it through finishing in 13th place with a jump of 7.86m. Darcy Roper jumped 7.82m for 15th place and Henry Smith finished in 24 spot with a best jump of 7.50m.

Sticking with the jumps, Elizaveta Parnova had a best clearance of 4.35m in the women’s Pole Vault and in the high jump Nicola McDermott had a best mark of 1.89m and Alysha Burnett with 1.70m, sadly none of these heights would be good enough to see them through to their finals.

Later this evening Rochelle Rodgers will run in the women’s marathon, which starts at 23:59 (06:59 AEST) and will be broadcast live and exclusively on Eurosport Australia (Foxtel).