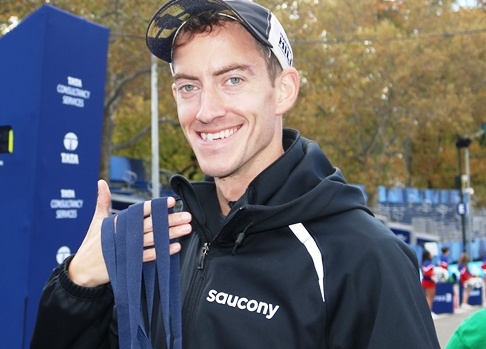 NEW YORK (04-Nov) — Fewer than 72 hours before the TCS New York City Marathon, Tim Ritchie sat back and thought about Sunday’s race through the city’s five boroughs. He called it many things: a re-debut marathon, a learning opportunity, an experience of a lifetime.

“The running journey is crazy,” Ritchie said, pausing a brief moment to let the thought sink in. “It’s crazy to think that I’m going to be on the start line of the New York City Marathon, lining up with guys like Stanley Biwott and Ritz [Dathan Ritzenhein] and all these other guys… Now that it’s here, it’s real.”

Four years ago, Ritchie was anxious and ready to make his marathon debut here. Mother Nature would intervene, though, and cause the cancellation of the 2012 New York City Marathon due to Super Storm Sandy. Not in the slightest defeated, Ritchie departed New York knowing that his chance at New York would come sometime in the near future.

Fast forward two years and once again Ritchie is on the start list for New York. He’s got two marathons under his belt, both run in 2013: a 2:21:31 debut in Boston and a 2:14:50 in Twin Cities. He’s eager for more. Yet two months before the 2014 race, a sacral stress fracture sidelined the Boston College alum and he was forced to withdraw from the field. Attempt No. 2 at NYC would be a no-go.

Now it’s 2016 and Ritchie is back in Manhattan. Again.  Healthy and fit, he jokes that the third time’s the charm “as long as I make it through these last two days.”

Ritchie is glad that his first TCS New York City Marathon is this weekend. He’s a different athlete now at 29 than he was in 2012 and 2014, with three marathons completed and a better understanding of what his body can handle.

This past August, Ritchie moved from his beloved Boston to New Haven, Conn., and has settled into a new routine, one that he hopes will help take him to the next level of marathon running.

“I really wanted to take a risk and start training like a professional athlete. I’ve been kind of getting by with my good looks the past six years and now it’s time to really put in the work,” Ritchie told Race Results Weekly. “I took a couple of baby steps toward that goal this fall, got my mileage up to a new level for me of 80-85 miles a week, which was a huge jump. I know that will pay off. Whether it pays off on Sunday or not, we’ll see. But the steps I’ve taken this fall to becoming more a professional athlete will pay off.”

In addition to the increase in mileage, Ritchie is no longer coaching full-time (he formerly was an assistant at Boston College, and now volunteers his time at Yale). He’s spent more time on strength training, adding double sessions while making sure to build in rest periods and time to really fine-tune his elite mindset. He’s now coached by 2004 Olympian Tim Broe as well.

The result has been a refreshed and re-energized athlete that’s ready to re-establish himself as a marathoner.

“I’m just looking to run my race and in a sense re-discover the marathon. I’m kind of looking at this as my debut — I’ve run three marathons but in a way I see this as my debut because I’ve made a few changes and I want to create a long-term vision of myself as a marathoner. I’m hoping Sunday is the first step towards that,” he said.

“I’m super pumped to be part of the experience. The result is kind of secondary to what I know will be an amazing experience for me. The field is incredible, both internationally and for the Americans… Sunday will be a step. It doesn’t need to be a giant one. Just a step forward.”

Ritchie isn’t putting any pressure on himself. That’s not to say that he’s taking his debut here lightly: Ritchie’s spent ample time reviewing footage of past New York City Marathons, taking in little nuances about the course and what to expect. A big fan of four-time champion Bill Rodgers and 1983 winner Rod Dixon, Ritchie has seen their memorable runs and hopes to channel a bit of their spirit and confidence on the course.

But most of all Ritchie wants to make the most of this moment, one he’s waited more than four years for.

“It reminds me a lot like Boston, where the race defines the city in a way and showcases what the people of New York are all about,” he said. “And it’s the best runners in the world battling it out. There’s no easy way to do it. It’s always been something I’ve wanted to do… Now I get to do it.

“I’m healthy, feeling pretty fit, had a good fall, and am finally getting to the start line of the New York City Marathon and finding out what this race is all about.”