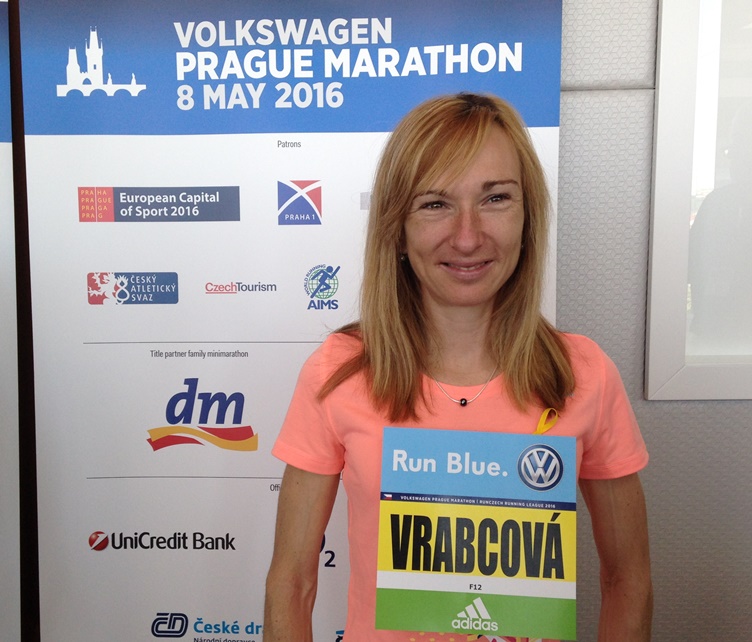 PRAGUE (05-May) — Eva Vrabcova is best known for her prowess on skis rather than in racing flats, having competed at three Winter Olympic Games. The 30-year-old native of Trutnov will try and achieve the Olympic Marathon qualifying standard of 2:45:00 here on Sunday at the Volkswagen Prague Marathon, solidifying her spot as one of the most versatile Czech endurance athletes in history. Smiling from ear to ear, the world-class cross country skier spoke of the joy of discovering her supreme running talent two years ago, finding success in the sport ever since.

“For me, skiing lately became a duty. I needed to prove that I was actually worth the ranking, while running for me is a pure joy,” said a glowing Vrabcova, speaking through a translator. “I really enjoy running for me, it is fun and I like it. It is liberating!”

While Sunday will be Vrabcova’s marathon debut, she isn’t too concerned about the 42.195 kilometer journey through the Czech capital. Last month at the Sportisimo Prague Half Marathon, Vrabcova placed tenth in a personal best of 1:11:06. She’s consistently improved her track and road racing times since 2014, achieving lifetime bests of 33:07 for 10-K (set in Prague last year) and 16:14.92 for 5000m.

Following her half-marathon tune-up last month, Vrabcova spent two weeks at altitude tailoring her speed. She’s been training with husband Martin Vrabec in anticipation of this weekend’s race, and is enjoying every step of the process.

“A marathon is a marathon, and you have to respect that. I had a great start in the half-marathon but that doesn’t mean that I should be stressful for [achieving] the Olympic marathon [standard],” said Vrabcova. In 2012, the Czech Republic was represented by Ivana Sekyrova in the Women’s Olympic Marathon; she finished 67th in 2:37:14.

When asked to compare her two athletic endeavors, skiing and running, Vrabcova admitted they are very different in one way: pain. With running, Vrabcova does not feel fatigue or tired, and she can withstand the constant, consistent pounding. She admitted being a little tired after her half-marathon, though returned to hard training two days later.

“[It’s] different when it comes to skiing, because skiing has six stages and the fatigue there is much more built up,” she said. As the 2014 Olympic Winter Games in Sochi, Vrabcova ranked fifth in the 30-K freestyle; 11th in the 15-K pursuit; 21st in the 10-K classic; and 10th in the 4×5-K relay.

Vrabcova gave up her skiing season this year to focus solely on preparing for her chance at the 2014 Summer Olympics in Rio de Janeiro. With temperatures forecast to be in the 20C range (68F) with 54% humidity, some are anticipating a tough day for racing. Yet the IAAF Gold label event also serves as the Czech Republic’s National Marathon Championships, drawing talent from the rest of the country and upping the ante for Vrabcova. Other notable Czech women racing include Ivana Sekyrova (PB 2:34:23 from 2012); Radka Churanova (PB 2:45:29 from 2004); and debutantes Monika Preibischova (1:16:17 half-marathon) and Dagmar Rychnovska (1:20:32). Experienced Olympic marathoner Jan Kreisinger and Jiri Homolac are the top men’s entrants from the Czech Republic.

“[I am] not really particular about the weather, love sun but am also used to skiing in the winter. I respect whatever the weather is. If the weather stays like it is today [19C] then it will be a great event,” said Vrabcova.

Though she may not be battling side-by-side with the strong East African contingent up front (which includes Ethiopian favorites Biruktayit Eshetu and Marta Lema), all eyes will be on Vrabcova. She’ll be the clear fan favorite, already is one of the Czech Republic’s most dazzling Olympic hopefuls.

“Whether I qualify for the Olympic Games or not, my life is happy,” she said.