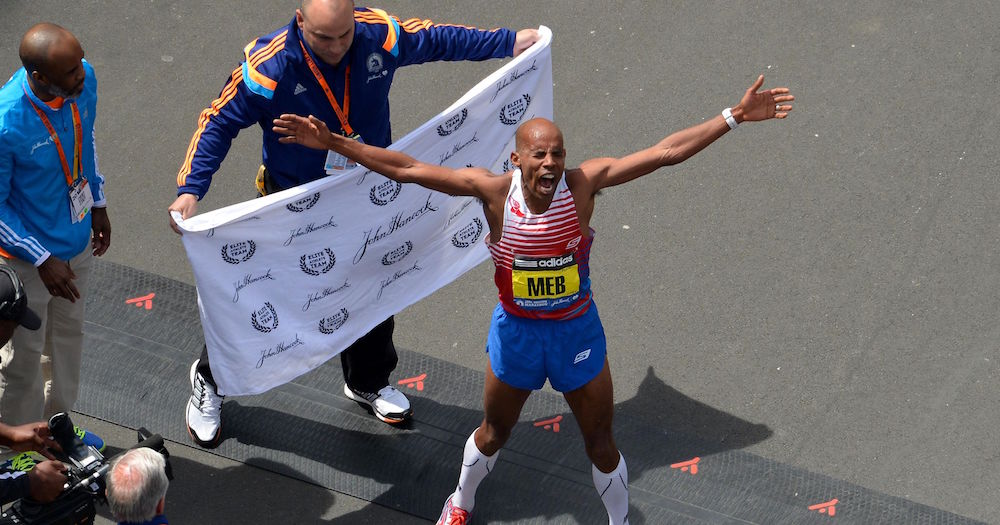 ***Ten Facts You May Not Know About “Marathon Meb”***
By Chris Lotsbom, @ChrisLotsbom
(c) 2015 Race Results Weekly, all rights reserved

NEW YORK (29-Oct) — Meb Keflezighi has always had an extra special spot in his heart for the TCS New York City Marathon. It’s where his marathon career began back in 2002, when he finished ninth and swore never to do another marathon again. And it’s where he shocked many by defeating Robert Kipkoech Cheruiyot and a strong East African field to win the 2009 race, becoming the first American man since Alberto Salazar in 1982 to don winner’s wreath.

While Meb’s story of triumph through adversity is well chronicled, Race Results Weekly thought we’d dig a little bit deeper to recognize his return to the city. Here are ten facts –some you may know, others you may not– about Keflezighi’s adventures in New York.

1 — Meb once swore off the marathon. Back in 2002, when ‘Lose Yourself’ by Eminem was topping the charts and the New York Giants were atop the NFL standings, Meb ran through the five boroughs for the first time. Midway through the race, Keflezighi disregarded coach Bob Larsen’s advice and took the lead on First Avenue. He’d later pay for the aggressive move, running out of energy and finishing a distant ninth in 2:12:35.

“He really suffered in those last few miles… He looked up at me [at the finish] and says, ‘You just saw my first and last marathon,'” recalls Larsen with a chuckle. “I knew it wasn’t his last one.”

Subsequently, Meb took a trip back to his native Eritrea. That’s where the marathon bug bit him again, and he vowed to return to the distance.

“Within a few months he visited Eritrea for the first time since he was a little kid and that really inspired him again,” says Larsen. “When he had to wait [to run his next marathon] I think that was a good thing.”

2 — Coach Larsen has been by Keflezighi’s side every single step of the way since his days at UCLA. That includes all ten TCS New York City Marathons, his Boston Marathon win, and his 2004 Olympic silver medal. When asked by RRW how Meb has changed over the years, Larsen laughs.

“I think the wonderful thing about Meb is that he hasn’t changed, or he has changed very little,” said Larsen. “He still has that feeling that he can run with anybody… That’s where the ‘Run to Win’ [motto] comes from. Not necessarily that he’s going to come in first, but that he is going to get the best out of himself.”

3 — After winning the 2009 TCS New York City Marathon, Meb was honored by wearing his gold champion’s medal on a float at the 83rd Macy’s Thanksgiving Day Parade. He was joined by Miss America Katie Stam on the Statue of Liberty float, as well as some of his family members.

Also that year Meb was a guest on ‘Late Night with David Letterman,’ reading the Top 10 list — Top 10 Thoughts That Go Through Your Mind When Running The New York City Marathon.

4 — For a majority of the elite field, a trip here means resting and relaxing before the big race. For Meb, it’s the complete opposite. In the 72 hours leading to the start line he’ll make countless appearances at media outings, sponsor arrangements, and more. Keflezighi said he’s working on six hours of sleep over the last two days, thanks to travel, meetings, and more.  He took a red-eye flight to get here last night.

“But I love being in New York!” he said. Don’t worry — he’ll be firing on all cylinders come race day.

5 — Keflezighi and wife Yordanos Asgedom have an extra special memory in Central Park. One night in May, 2005, Meb asked Yordanos to go for a walk with him in the famed park. En route to Central Park, the pair came across a Zales jewelery store.

“It was very nice,” Yordanos began, giggling as she recalled the moment. “He stopped across the street from a Zales jewelry store. He stops, looks at me and makes sure I see it, and then it dawned on me that he was taking me there at that very moment. So we walked across the street and he goes ‘Pick any ring you’d like!’ That’s how it went.

“You know, there’s so many good memories here. So many great memories. That’s just one of many!” she said.

6 — This year’s race would be Meb’s eleventh TCS New York City Marathon had Hurricane Sandy not forced the cancellation of the 2012 edition. That year, Keflezighi stood up at an athletes meeting and addressed the crowd of devastated elites. While everyone in attendance was disappointed, Keflezighi looked for a silver lining and put the race in perspective.

“Let’s not look at the one year we missed out, but on how much the New York Road Runners and the city of New York has given us in the past, and will give us in the future,” Keflezighi said in an inspiring tone. “There’s nothing like what the New York Road Runners have done — first class service. And it’s because of the volunteers [that] elite athletes and others can say ‘hey, we want you to have a positive race experience.'”

7 — Meb announced his intention to run this year’s TCS New York City Marathon in a unique way: on national television during the NYRR Fifth Avenue Mile. Appearing on ESPN’s coverage of the race, Keflezighi proudly joined NYRR’s youth Mighty Milers and said he would return to race here for the tenth time.

Along with reigning women’s wheelchair champion Tatyana McFadden, Keflezighi is an ambassador for the NYRR’s Team for Kids youth initiative that gives children the opportunity to run and experience the joys of running.

8 — According to Yordanos and Meb’s brother, Hawi, one of his favorite songs is “New York State Of Mind” as performed by Jay-Z and Alicia Keys. The 2009 chart-topping hit is a family favorite because it brings back all the special memories shared in the city.

“That song came out right round the time when he won the marathon, so he loves listening to it. It’s extra special,” said Hawi.

“He always brings his ‘A’ game,” Larsen said. “I think he’s having maybe as much fun as he’s ever had at 40. He may disagree with me because it’s damn hard work. But in some ways he’s enjoying being 40 and putting pressure on the young guys. I think anybody would enjoy that. But it hasn’t changed him a bit. He still wants to be in the Olympics with these guys.”

10 — Meb, like most runners, feels the pain associated with running a marathon. He told media members that after a typical marathon, he’ll be in pain for roughly four days. After all, Meb is mortal!

“I am unable to move until Thursday for sure,” he said. “I jokingly say if you want to know how I feel, have an 80-year-old run on pavement 26.2 miles, 12 miles an hour, and you won’t be able to wake up. But you’ll sleep comfortably for five or six days.”

A true family man, Keflezighi savors time with his family. Here at the race’s media center, some of his closest family members gathered for photos at the dais. They have been by his side from his first steps taken on the Verrazano Bridge, all the way through the Central Park finish line.

“I feel blessed to be here. I am excited for Sunday, my tenth one. It should be fun, should be a lot of work, but I feel ready, and I’ll see what happens,” hesaid. “That’s what racing is. I always say ‘Run to Win.’ It doesn’t mean getting first place all the time. If you have the courage and honor like I did in 2009 or in Boston, you go for it. But if not, you finish as high as possible and the best that you can because you have the body that is able to do that. And you know what, you will never regret it after you finish and you’ll come back strong.”