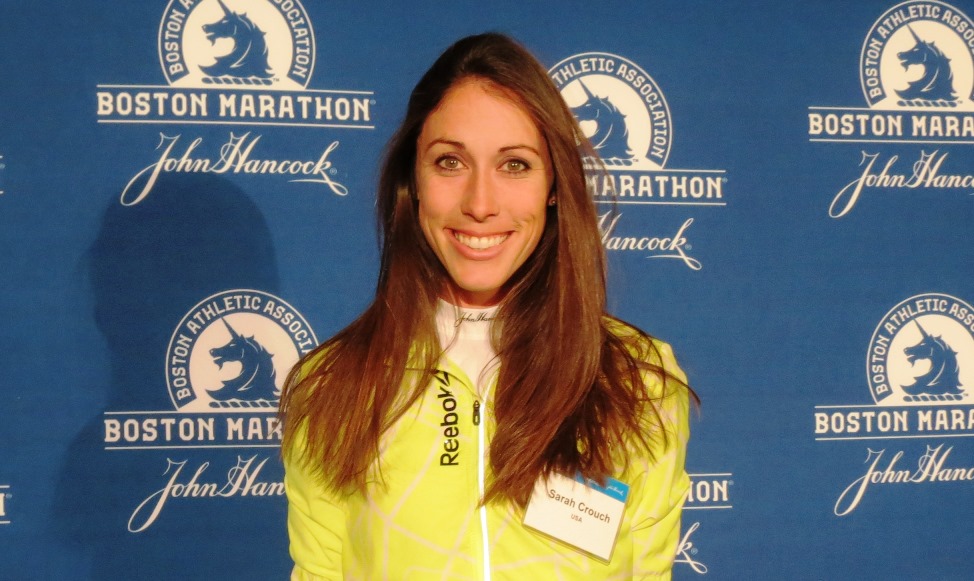 BOSTON (15-Apr) — In an Olympic year which began with the painful disappointment of missing the 2016 USA Olympic Trials Marathon last February, things nearly got even worse for marathoner Sarah Crouch.

After running the United Airlines NYC Half on March 20, the 26 year-old Crouch felt searing pain in her heavily-taped right hip. The injury –which had caused her to miss the Trials, healed, and seemed to be under control– had flared up badly during the race.  Later, as a massage therapist worked on her in the athlete recovery area, Crouch was overcome with both physical and emotional pain.  Surely, she would have to withdraw from the Boston Marathon, too, the race she had chosen as her big goal after scratching from the Trials.

“My hip was so bad,” Crouch told Race Results Weekly in an interview here today.  “I crossed the finish line, walked directly to my phone, called my coach sobbing and said, I can’t do it, I can’t run Boston.”

It was a bitter comedown for Crouch whose career was on an upward trajectory last year.  At last October’s Bank of America Chicago Marathon, she had a dream race, running a 2:32:44 personal best and finishing sixth in an Abbott World Marathon Majors.  Of the 246 women who qualified for the 2016 Trials, Crouch was ranked 17th by marathon time and hoped to contend for a team spot in Los Angeles.  Now, it seemed, there was nothing.

On the bus back to the Midtown Manhattan hotel where the athletes were staying, Crouch sank into a deep funk.  How could things have gone so badly after such a great race in Chicago?

“I got on the bus back to the hotel, sat in the very back seat by myself and started crying,” Crouch recalled.  A race official saw her in distress, sat down with her and they talked quietly.  “[He] said a few things that really, really stuck,” Crouch continued.  “He said not to make the big decision, not to run Boston, based on emotion, and I knew that was what I was doing.  The marathon and training is like a relationship… and I’m not giving up on this relationship.”

Crouch went home to Lexington, Kentucky, thought things through, and went back to work.  She did everything she reasonably could to manage her injury while staying on course for Boston.

“For the last four weeks until now I’ve spent thousands of dollars, thousands of tears on therapy,” Crouch explained.  “I’ve had three-inch needles stuck in my hip, I’ve broken down and rebuilt, trained through it, and I’m here.  I honestly have no idea how Monday’s going to go.”  She added: “I’ve never been so appreciative of being at a race.  I need to be here.”

Although Crouch said her hip had healed well from last year’s injury, the remaining scar tissue was a lingering problem.

“Can you imagine gears of a machine, but there is this big rock of scar tissue lodged in the gears,” Crouch said.  “So, every time I started running faster, driving my knee, those gears would get stuck.  It would get worse and worse and worse.  Dry-needling (a therapy technique using acupuncture needles) has turned that rock into pebbles, and then into sand.  I’m hoping on Monday that there will be nothing stopping those gears.”

Crouch and Neely Spence Gracey are the only American women in the invited field here in Boston, typical for a year in which the Olympic Trials are held and only a few Americans run commercial marathons in the Spring.  Gracey, who was born while her father was actually running the Boston Marathon in 1990, is making her debut at the distance, and both women would like nothing more than being the top American.

Pete Rea, Crouch’s coach, told her to keep her pace conservative in the first half and not get carried away by the downhills in the first part of the course.  Crouch reminded a reporter that she has the slowest personal best in the elite field here by a good five minutes, and she needed to stick with her race plan in order to avoid trouble.

“I’m just going to say what he said, but please bear in mind that these are not my words,” Crouch said, looking slightly embarrassed.  “He told me to keep it in my pants the first ten miles, and I think that’s fair.  I do not intend to go out any faster than goal pace for the first ten miles simply because I don’t want to view the first ten miles as putting time in the bank.  I want to view it as running marathon pace with less effort, so I have something left in the final 10-K when I need it.”