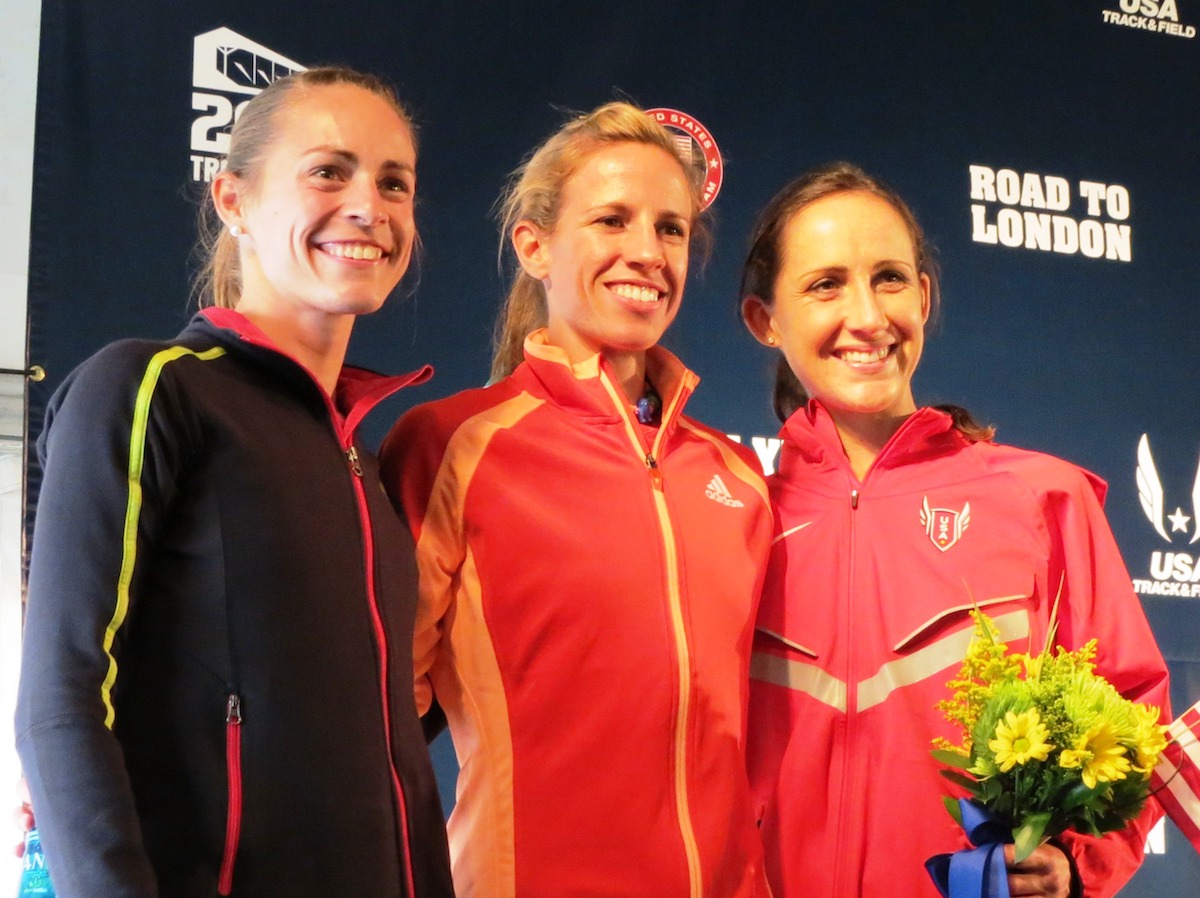 NOTE: With Morgan Uceny announcing her retirement today at age 31, let’s flash back to her victory at the 2012 USA Olympic Trials in Eugene –Ed.

EUGENE, Ore. (01-Jul-2012) — Their tactics differed greatly, but both Leo Manzano and Morgan Uceny won the 1500m titles on the final day of the USA Olympic Trials at Hayward Field here, leading formidable teams into the London Olympics with genuine medal aspirations.

Manzano, 27, from Marble Falls, Texas, didn’t react right away when Will Leer and Jordan McNamara took the pace out hard in search of the Olympic Games “A” standard of 3:35.50, their only chance of making the Olympic team. The 400 meter mark was reached in 57.4 seconds, right on the “A” standard pace.

“It was really tough out there,” Manzano, the reigning USA indoor 1500m champion, said. “I knew I needed to be near the front.” He said that he told himself to “be calm, be smooth.”

The pace sagged in the second lap to 59.9 seconds with Leer still leading. Manzano had slipped back to sixth position, just behind his key rivals, Andrew Wheating and Matthew Centrowitz. Robby Andrews, also a threat to make the team, was well back in 11th place. Then, with 400 to go, Centrowitz –the 2011 world championships bronze medalist– took over the lead and the pace visibly picked-up. Manzano said he was caught flat-footed.

“It was like this train came right by me,” he told reporters, shaking his head. “I knew I was in trouble right there.” He continued: “I just stayed right on him (Centrowitz).”

Rounding the final curve, Centrowitz had a clear lead, but Manzano kept coming. The two athletes banged elbows, but Manzano got past Centrowitz on the outside, closing a 53.08-second final lap to win in 3:35.75 to make his second consecutive Olympic team at the distance. Centrowitz finished a clear second in 3:35.84, a great result given that he lost training time to a minor knee surgery in April. He said later that he wasn’t sure if anyone would push the pace.

“I actually didn’t know that anyone would take it out,” he said. “I couldn’t tell who would have done it. Regardless, if it was slow or fast, I had to be ready.”

Wheating, who finished second at 800m here in Eugene at the 2008 Trials, was battling against a trio of rivals for the final team spot. Sprinting in lane three, he was able to hold off a charging Andy Bayer on his left, and the fast-kicking Robby Andrews and David Torrence on his right. Wheating said he gave it his all, lifted by the cheers of the Oregon fans at Hayward Field.

“I blacked out the last 50 meters so I can’t tell you what happened,” said Wheating who clocked 3:36.68 for third. Bayer, the reigning NCAA 1500m champion for Indiana University, ran 3:37.24 for fourth and Andrews –who was so tired after the race he had to have volunteers remove his spikes and carry him to the recovery area– got fifth in 3:37.45. Leer, who had made the early fast pace, finished last in 3:46.75.

There was decidedly less drama in the women’s contest which preceded the men’s. The early honest pace set by three-time national 1500m champion Treniere Moser in the first 400 meters (65.8) collapsed in the second lap (68.1) allowing defending national champion Uceny to bide her time, then take the lead –for good– with one lap to go.

“I was in second and third position most of the race,” Uceny, 27, explained, still wearing her colorful plastic choker necklace which has become her trademark. She continued: “I was staying back and trying to run my own race.”

Perhaps still thinking about the fall in Daegu last summer which put her out of medal contention at the world championships, Uceny just kept upping the pace, daring anyone to follow her.

With a 60.14 final circuit, Uceny won her second consecutive USA 1500m title, and locked in her first Olympic team berth. Behind her, Shannon Rowbury made her second Olympic team by passing world champion Jenny Simpson with about 100 meters to go. Rowbury ran 4:05.11 to Simpson’s 4:05.17. All three women had the IAAF “A” standard of 4:06.00 before they entered the race, and superseded that time here this afternoon for good measure, locking-in their Olympic Team berths.

“It was a difficult race,” said Simpson who got a hug and a kiss from her husband, Jason, right after she finished. She added: “Making the team is harder than being there (at the Olympics),” she said.

Gabriele Anderson, who had been disqualified from the semi-finals before having her second place finish in the second heat restored on appeal, finished a distant fourth in 4:07.38. Uceny’s training partner, 2010 USA 1500m champion Anna Pierce, finished fifth and is the alternate for the team as she is the next athlete with the “A” standard.