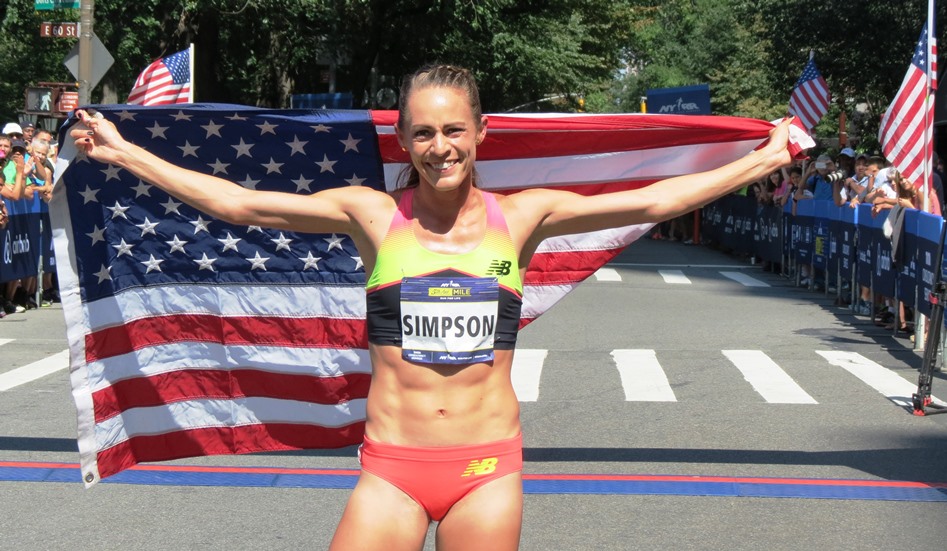 ZURICH (02-Sep) — Whether you look at it as a blessing or a curse, traveling the world is a big wildcard when it comes to professional athletics. Five women competing at Saturday’s New Balance Fifth Avenue Mile will be racing again in under 48 hours after toeing the line at the Weltklasse here, the IAAF Diamond League meeting, making for a whirlwind of a pre-race routine.

Early in the season, athletes at this level wouldn’t attempt such a double, but now it is the end of the season.

“You wouldn’t do it in the middle of the season, but now that Rio’s done and the main track races are all finished, road races are a lot of fun really,” Laura Muir said here last night. “Hopefully I’ll be in good shape come Saturday.  It’s my first time there so I’ll have to see if I can gauge it right. It’ll be tricky but I suppose I’ll have a bit of fun there!”

Simpson said that when it comes to tinkering and planning racing schedules, travel is always a major factor. She must consider not only time on the road or in the air, but the after effects journeys may have on her body. It’s easy to commit to too much, too soon internationally.

“The racing schedule is important. Where can you get a good race, where’s the competition going to be, what’s the best venues. But then travel, incorporating that is a big, big part of the decision where you race,” Simpson told Race Results Weekly. “If you overcook yourself traveling, who cares if you’re in the best stadium in the best race. It’s a really big deal, I think.”

For four of the last five years, Simpson has closed her summer season with a victory at Fifth Avenue. It’s a way to go out with a bang, setting the tone for the off-season to come. Living out of a suitcase since leaving for the Rio Olympics last month, Simpson’s return to American soil is met with excitement. Fatigue may have gotten the best of her down the stretch in Zurich, where she finished fourth in 3:58.54. In Manhattan, though, adrenaline and the quest to retain her title will keep her going strong from East 80th to East 60th Street.

“I’m really excited about Fifth Ave,” she said. “That’ll be a really fun way to end the season. I can’t wait.”

So how does an athlete beat the negative effects of travel when racing twice in three days on two different continents?

For Kate Grace, also a 2016 Olympian, said she planned to take an ice bath after the Zurich 800m (she set a PB 1:58.28 to finish fifth), then would run very gently before her flight and –if her body is up to it– run easy again after she arrived in Manhattan. The aim is to loosen up her muscles rather than get work in. She’ll also eat a lot of lean protein seeking to boost recovery post-race.

For Coburn, arriving to New York City doesn’t bring immediate relaxation. She has a commitment to close NASDAQ along with Olympic 1500m gold medalist Matthew Centrowitz.

“I think it’s 46 hours from now,” she said last night. Flying over to New York, I get to do the closing bell at NASDAQ with Centro, so that will be cool, and then race! It’s a busy next 46 hours but it should be fun,” she said.

Coburn will play it by ear with her recovery methods. “If I was back in Boulder and had all the weight room and recovery treatments, I’d be doing that but you’ve got to improvise on the road. Maybe tonight’s an ice bath, maybe it’s just get onto the plane and hope my legs hold up!” She said she’d see how she felt before running either pre-flight in Zurich or post-flight in New York.

The rookie Muir –who’s the current world leader for 1500m after running 3:55.22 on the track in Paris a week ago– spoke for one and all going into the race. She’ll be keeping an eye on what experienced vet Simpson does, but her main priority is to enjoy the experience as a whole. Road miles don’t come along that often, after all.

“I have no idea [what to expect] to be honest. Jenny Simpson is running and she’s very experienced, a fantastic runner too,” she said. “It’s going to be very fun, all about having fun. I’m looking forward to that.”

The New Balance Fifth Avenue Mile will be broadcast live online at USATF.tv.