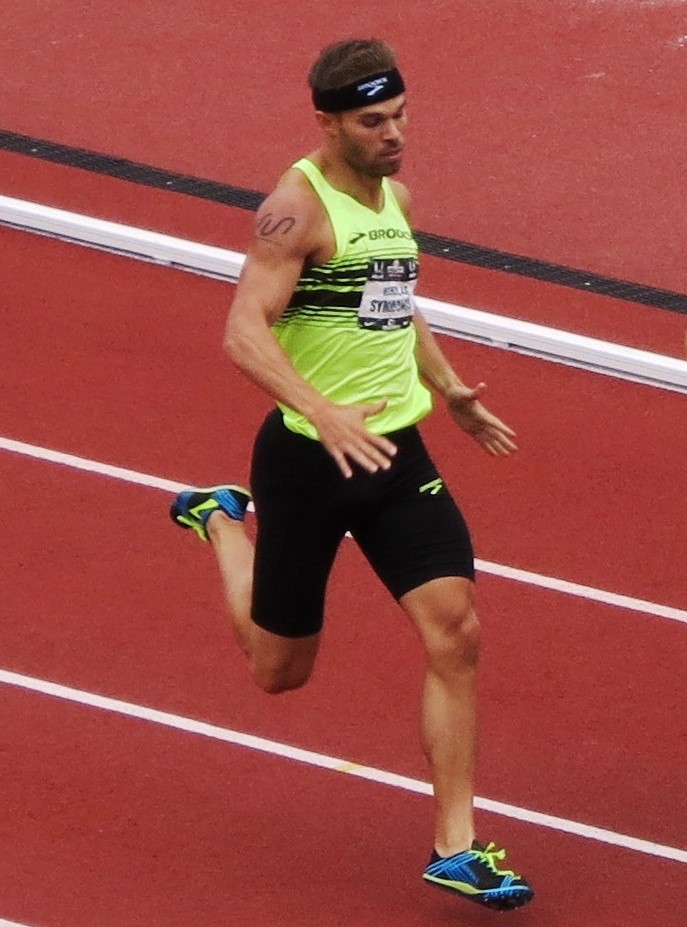 EUGENE, OR (30-Jun) — Earlier today, Nick Symmonds announced via Instagram that he had withdrawn from this week’s USA Olympic Trials due to a torn ligament and stress fracture in his left ankle.  Although frustrated, the two-time Olympian and reigning USA 800m champion remained upbeat as he spoke to the media here at Brooks House adjacent to Hayward Field.

Touching upon the injury and the injustices he sees in track and field at the moment, Symmonds had his audience captivated. Here are five quick takes from Symmonds:

1) His injury occurred three weeks ago, and he will not race again in 2016. He tried putting his spikes on for a session this morning, and it did not go well.

“We like to use this analogy of sharpening a pencil. Each week you sharpen it a little bit more and a little bit more and you want it perfectly sharp when you go to race. I sharpened it too much. I’ve done the exact same thing that I’ve done for the last ten years and it always works, but at 32 I just couldn’t quite get away with what I used to be able to do.”

Swelling ensued, and Symmonds wound up taking three weeks off. If he wasn’t feeling the excruciating pain in his ankle, Symmonds said he would have raced just for the experience. Instead, he’ll now relax, do a lot of fishing, drink many beers, and watch the races.

2) Symmonds’s contract with Brooks runs out at the end of the year, and he is unsure of what the future may hold. It is possible that the two-time Olympian will never lace up the spikes again.

“I feel like I have ticked just about every single one of the running goals I have set for myself. The only two that I haven’t ticked are winning an Olympic medal and running a marathon, and obviously the medal is not going to happen for me it looks like. But I’d like to run a marathon at some point. I think that I could possibly run one more year [on the track], but it’s up to Brooks at this point,” he said. “If this is the end of the road for me, then I’m just so grateful for the experiences that I’ve had over the last ten years… The jury is out. I’m not announcing my retirement today. I think that’s something that when this season finishes up we can all sit down and decide what’s going to be the best for Brooks, what’s going to be the best for me. I do have a lot of other irons in the fire though.”

He said that once he does officially retire, he will climb the tallest mountain on every continent, work on his company Run Gum, and enjoy many beers.

3) Now that he is sidelined, Symmonds hopes other athletes will take up his cause for change at the Trials. Long the front man for change with regard to athletes’ rights and their ability to wear sponsor logos (going against the infamous IOC “Rule 40” banning certain advertisements), Symmonds will not be able to advocate his stance on the field of play.

“That’s the hardest part for me. I feel like I could have been a very effective leader out there and kind of uniting the athletes and bringing about some change and awareness about what’s going on,” Symmonds said. “It’s a lot harder for me to do that from the sidelines. It’s up to the athletes. I can’t do this by myself. I can be as annoying as possible on social media and do interviews all day long, but until the athletes come together and decide that enough’s enough, then nothing is ever going to change.”

4) Symmonds would like to see a shift in track and field, both in revenue sharing and logo restrictions. He believes a 50/50 revenue share from the IOC with Olympic athletes would be appropriate.

“I think the beginning is to implement a 50-percent revenue sharing model that is very common in professional sports,” he said, referencing Major League Baseball (MLB), the National Basketball Association (NBA), and the National Hockey League (NHL). “The IOC is going to make four billion dollars this year, that’s their gross revenue. Take two billion of that and divide that among the 10,500 Olympians that are going to be out in Rio, and the IOC would write a $190,000 check to every single Olympian. That’s a pretty big payday for four year’s worth of work. I think that’s the minimum right there.”

Symmonds also hopes that the IOC will give athletes the opportunity to recognize sponsors that are not official IOC or USOC partners.

“Had I made this Olympic team, it wasn’t Nike or AT&T that got me there. It was Brooks, and I wouldn’t even be allowed to thank Brooks. Brooks has been the only reason why I have been running the last three years, and without them I would have retired in 2014. Any Beasts that make the team this year I think they need to thank the sponsors that have got them there.”

5) Symmonds has faith in at least one of his Brooks Beasts teammates making the Olympic team. While he says Donavan Brazier and Boris Berian are clear favorites, because it is the Olympic Trials anything can happen — and the fastest on paper rarely sweep the podium.

“The Olympic Trials changes everything because there is so much pressure on these athletes.

“I think Cas [Loxsom] and Drew [Windle] and Shaq [Walker] and the rest of the team have a shot. We’ve got some really talented guys,” he said. “Again, it’s the Trials and anything can happen. You just don’t know how athletes will respond to the pressure. I’ve never seen any of them run in the Olympic Trials cause they haven’t been around for one! I think one or two of them will make the final and then anything can happen.”