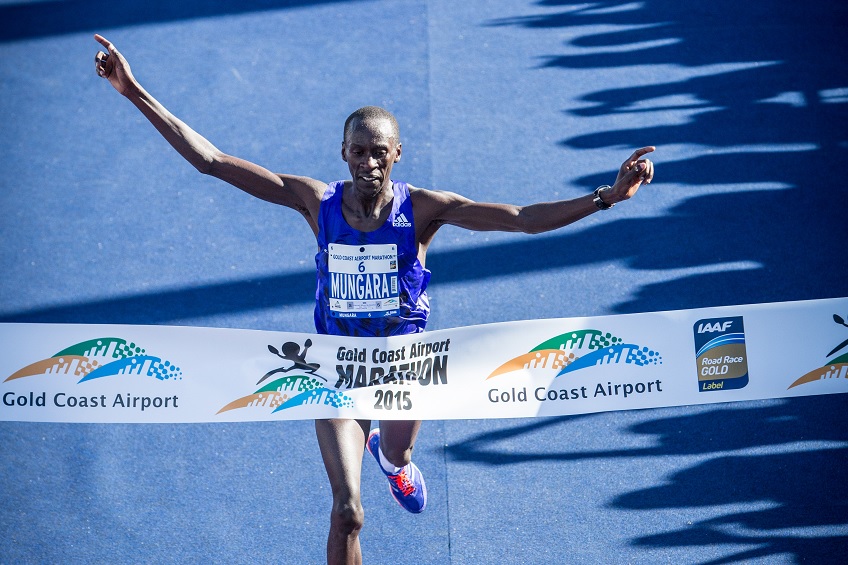 The 2016 Gold Coast Airport Marathon will welcome one of the fastest international elite fields in Australian marathon history headlined by the return of last year’s winner and Australian all comers record holder Kenneth Mungara on Sunday 3 July.

The 42-year-old Kenyan shaved 32 seconds off the previous Australian all comers and race records when he broke away from 2014 winner Silah Limo and countryman Evans Ruto in the final two kilometres to finish in 2:08:42.

Mungara’s achievement will be under threat with six of the confirmed men’s field having run marathons under 2:08:42. Included in the group are Kenya’s Peter Some (2:05:53) and Willy Koitile (2:08:32), as well as former course record holder Yuki Kawauchi (2:08:14) from Japan.

Kawauchi’s return marks his fifth consecutive appearance and produces mouth-watering clashes with compatriot and long-term rivals Arata Fujiwara (2:07:48) and Mongolian Ser-od Bat-ochir (2:08:50) who is attempting to qualify for his fourth Olympic Games.

Minister for Tourism and Major Events Kate Jones said the quality of this year’s marathon field was testament to the international appeal of Australia’s leading marathon and the host city of Queensland’s Gold Coast.

“The Gold Coast Airport Marathon, part of Tourism and Events Queensland’s major events portfolio, is a world-class event and continues to attract the best international runners from around the world,” Ms Jones said.

“Last year, the records tumbled when Kenneth Mungara recorded the fastest marathon on Australian soil. We hope he can rewrite the history books when he returns to the Gold Coast in July.

“The IAAF Road Race Gold Label event will also host a number of overseas runners vying for 2016 Rio Olympic marathon selection, as well as a number of Australian Rio-bound athletes to be announced soon.”

“The Gold Coast Airport Marathon is one month away and already the event has attracted record numbers from the emerging international markets of Malaysia, Singapore, China, Hong Kong, Indonesia and Taiwan,” Ms Jones said.

“More than 3,000 runners from around the world are expected to descend on the Gold Coast, emphasising the global appeal of the two-day event.

“Tourism Events Queensland, Gold Coast Tourism, Gold Coast Airport and Tourism Australia have assisted the growth of international and interstate participants which will deliver more than 74,000 visitor nights and an economic impact of more than $22 million for the city.”

The women’s marathon course record of 2:27:17, set by Japan’s Yukiko Akaba in 2013, is also under threat with seven of the leading female contenders recording personal best times under 2:28:00.

“For the third consecutive year, the Gold Coast Airport Marathon holds an IAAF Road Race Gold Label, placing it amongst the best marathons in the world, including New York, Berlin, Tokyo and London,” Mr Watson said.

“Our internationally recognised flat, fast, scenic course and position as Australia’s fastest marathon has attracted one of the most exciting elite fields in the event’s history.

“We’ve also achieved record participation from key international markets by showcasing our race and the beautiful Gold Coast to more than 800 million households around the world through our television coverage, complemented by our significant online presence.

“The event’s ideal running conditions are major drawcards for overseas and interstate runners with 65% of participants achieving a personal best time last year.

“Friends and family of participants are encouraged to join thousands of locals and visitors along the course and cheer, follow their progress via our live split times or tune into the live webcast from 5:45am on Sunday 3 July.”