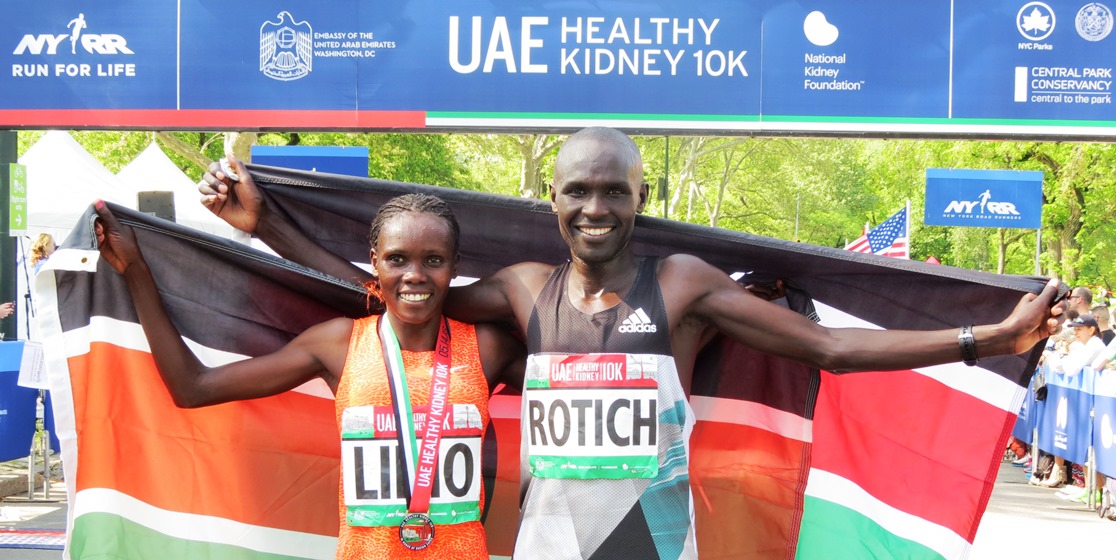 NEW YORK (14-May) — Lucas Rotich entered today’s UAE Healthy Kidney 10-K with extra motivation to win and make his family proud. For the first time since his newborn son Carson was born two weeks ago, the Kenyan marathoner laced up his adidas racing shoes destined for victory. Making good on his promise, Rotich broke from Wilson Chebet in the final mile, completing the famous Central Park circuit in 28:29. He’ll return home to Eldoret with a $25,000 winners check, ready to make Carson smile.

“It was tough, but I was coming here to win. I had a baby son two weeks ago and his name is Carson, so winning this race and coming to America, it was nice to win because I dedicated this race to my little son,” Rotich told Race Results Weekly. “It was such a nice race.”

From the get-go, New Zealand’s Zane Robertson headed the charge out front accompanied by Rotich, Chebet, and Ethiopian Teshome Mekonen. The group passed the mile in 4:30, two miles in 9:01, and 5-K in 14:00, setting the stage for a battle royal on the return to Central Park’s southern tip.

Utilizing the tangents to his advantage, Mekonen surged on each downhill aiming to gain any possible advantage on his more experienced peers. Yet every time the Ethiopian managed to gain five meters, he’d be reeled in. Rotich and Chebet, sporting matching black and white vests, were not about to let Mekonen run away to victory.

With Robertson eventually falling back, the remaining trio took turns pushing. First it was Mekonen, then Chebet, and finally Rotich. No one gave an inch, running step for step within a stride of one another.

Even at the certified 8 km split, reached in 22:44, it was anyone’s race. Yet when Mekonen and Chebet slowly began to show signs of cracking, Rotich was ready to pounce. Remaining calm, his eyes never left the asphalt and his orange shoes barely touched the ground. With one kilometer to go, Rotich played his final hand.

“After the first five kilometers was up and down, I say ‘lets get it going.’ Before I ran marathons I was a 10,000m guy, so I had experience running 10-K so it was not a big problem for me,” he said. “I felt comfortable because after 8-K I said ‘it’s just one mile,’ so I had to push to get ahead of the line. I had to [push] to win.”

“Coming here, it was nice for me. It is so special to win for my family,” Rotich said. Training alongside reigning Abbott World Marathon Majors champion Eliud Kipchoge, IAAF World Half-Marathon gold medalist Geoffrey Kamworor, and marathon ace Bernard Kipyego, Rotich was confident he could take home the victory here. “I felt good and fit. I have so many nice guys to train with.”

Chebet rebounded from a disappointing DNF at last month’s Boston Marathon to take second. “The last few kilometers I was trying to do my best, but Lucas Rotich came from behind and moved forward and went strong. I was trying to catch up to him,” he said. “I can say I am happy for this event because I ran my best. I’m real happy about it.”

A mere four kilometers into today’s race, Cynthia Limo was not in a good spot. Surrounded by talent –including fellow IAAF World Championships Half-Marathon medalist Mary Wacera and 2010 TCS New York City Marathon champion Edna Kiplagat– Limo couldn’t ignore the fatigue that had been building within her petite frame.

The true race was only beginning as the trio passed 5-K in 16:02. Up and down Central Park’s many hills, the group stuck together like glue. While the others may have been cruising, Limo was playing a mental game trying to stay positive. Step by step she willed herself to hang on and compete.

“You know, sometimes to win a race, it is not only you. There are some people who push here and there to make the race successful. With Mary and Edna, they are very strong ladies,” she said. “From 6-K, from 8-K, I encouraged myself that I have to go. I thought maybe I could finish on the podium and finish in top three rather than dropping.”

Holding her position through Central Park’s hills, Limo was somewhat surprised to see the 800-meters-to-go sign. Considering there were fewer than three minutes of hard running left, Limo was able to hit another gear that Wacera and Kiplagat could not match.

“Near the finish, when I saw 800 meters, that’s when I tried to push. When I pushed at 800 meters no one seemed to follow me step-by-step. That’s when I had the courage that I had to go for it,” detailed Limo. “As I was coming up there, 200 meters [left] I looked behind and saw my colleagues, and by now I was saying ‘Wow it is a good day!”

In her UAE Healthy Kidney 10-K debut, Limo took care of business by crushing the uphill second half in 15:37 and finishing first in 31:39. In order to break the tape, she had to make a quick side-step some ten meters from the finish to get into the women’s finish lane. It didn’t thwart her momentum in the slightest.

“For me it is the first time I have been to New York for Healthy Kidney, and it has been a good day, a good race for me. It is a pleasant day, a beautiful day, and today’s race was a good race thanks to my colleagues,” said Limo. “I feel so happy, I can’t even tell you.”

Runner-up Wacera gave credit to Limo for both her mental and physical toughness.

“Cynthia was already speeding up [with 800m to go] and was very strong. I tried to hang on but could only get second,” said Wacera. Interestingly, Wacera plans to return to the track in an attempt to qualify for Kenya’s Olympic team in the 10,000m. “I hope after this to be OK and I’ll be able to do a lot of speed… If I have improved on the speed then I think it will be a good idea to try for the Olympics before I concentrate on road races.”

Diane Nukuri placed fourth in 32:23, while a trio of Americans –Laura Thweatt, Maegan Krifchin, and Allie Kieffer– finished in the top ten. Thweatt was sixth (33:20); Krifchin eighth (34:01); and Kieffer tenth (35:19). At three miles Thweatt faced her own mental battle: go with the leaders and risk bonking, or race a bit conservative hoping to pick people off.

“The pace quickened a little bit, and you have that moment of truth where you’re like, ‘do I just go and get on or do I stay?’ I had a moment of hesitation and I stayed, and at that point I was by myself just grinding it out,” Thweatt said. “That was my mistake, had a little bit of a mental lapse, but it was still a good effort and I’m relatively happy with how it turned out. It’s just a good notch in the belt for the [Olympic] Trials.”

Conditions for today’s race were nearly perfect, with temperatures a moderate 65 degrees, wind nearly non-existent at 3 mph, and humidity at 70-percent.