Unprecedented depth of field with 8 men holding personal bests under 2:08

Ottawa, May 4, 2022 – Ethiopia will again be favoured to win when the newly renamed Tartan Ottawa International Marathon returns to an in-person event on Sunday, May 29th.

Indeed, the Ethiopian women are expected to extend their 10-year winning streak as they vye to break the course record (CR) of 2:22:17, set in 2018 by returning champion Geleta Burka. Burka will be challenged by the 2019 defending champion, Tigist Girma, who has since run twice under 2:20.

These blistering fast women will be challenged by country woman Bruktayit Eshetu who finished 2nd in the 2019 Toronto Waterfront Marathon with a personal best of 2:22:40 and Juliet Chekwel of Uganda, who recorded a national record of 2:23:13 in her marathon debut two years ago.

Returning to Ottawa will be Lanni Marchant who broke the 28-year-old national record in 2013 by running it in exactly 2:28:00. Marchant will be heading off against Dayna Pidhoreski, the 2019 Canadian marathon champion with a personal best of 2:29:03.

Unprecedented depth of field in the men’s event

On the men’s side, Ottawa’s new Elite Athlete Coordinator Dylan Wykes, a 2012 Canadian Olympian, has assembled an unprecedented depth of field on Canadian soil. No fewer than eight of the men lining up on the start line will be boasting personal bests under 2:08, with three of them having recently run 2:06 or faster. The course record, set by fellow Ethiopian Yemane Tsegaye in 2014 is 2:06:54.

Wykes will be looking for return competitor Adugna Takele (2:05:57) and his fellow Ethiopian competitors Tsegaye Getachew Kebede (2:05:11) and Andualem Belay Shiferaw (2:05:52) to compete for that CR. The Ethiopians could see a fight from Kenyan Alex Kibet who recently won the Berlin Half Marathon with a personal best of 58:55, indicating his preparations are going well.

“It’s been an interesting challenge to build this start list with so little in-person competition over the past two years,” said Dylan Wykes, the Elite Athlete Coordinator. “Based on what we’ve seen recently with these athletes, and with how fast road races have been generally, I think we are quite likely to see some very fast times on May 29th. I can’t wait.”

The top Canadian in the men’s field is Tristan Woodfine, who was 10th in the 2018 Ottawa Marathon and will be seeking a top 10 finish. 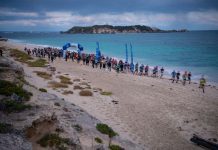