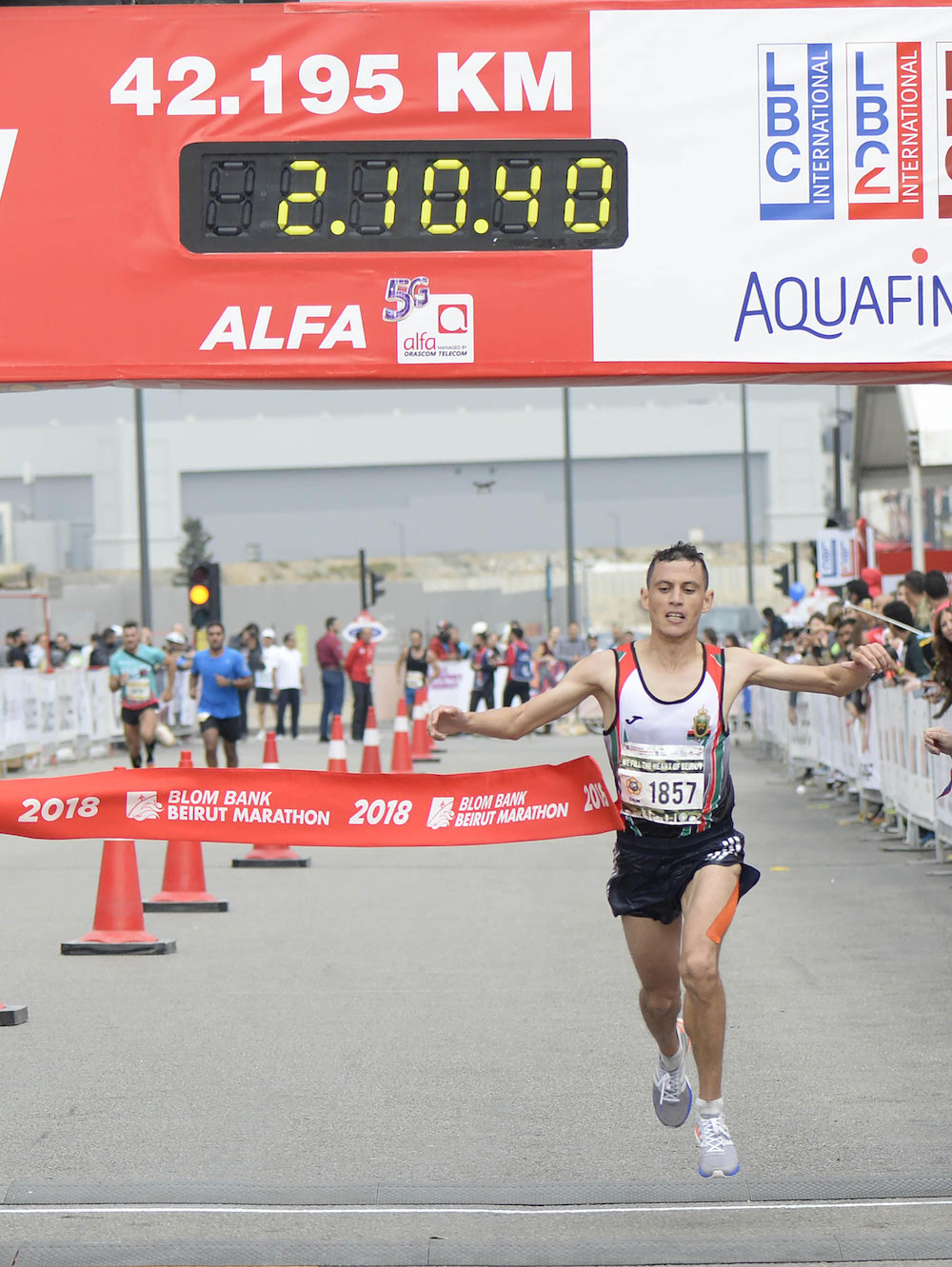 Mohamed Reda El Aaraby of Morocco played a starring role at 16th edition of the BLOM Bank Beirut Marathon on Sunday morning (11), clocking a course record of 2:10:41 to upset the favourites in the IAAF Gold Label road race.

On what proved a magical day in the Lebanese capital, the women’s race also saw some swift performances, with Ethiopia’s Medina Deme Armino taking victory in 2:29:31 ahead of Nazret Weldu Gebrehiwet, who clocked an Eritrean record of 2:29:48 – the third and fourth fastest times in the race’s history.

But it was El Aaraby who stole the show, the 28-year-old surprising the East African contingent with his surge early in the men’s race, taking full advantage of the hesitancy among his rivals as several leading contenders kept their eyes trained on Wesley Korir, the 2012 Boston Marathon champion who was running his first marathon since April 2017.

After struggling with injuries on the build-up, Korir was far from his best, the Kenyan coming home seventh in 2:14:18, but given his shortened preparation the 35-year-old was upbeat about performance.

“My goal was to mix with competition, feel how it feels to run a marathon again,” said Korir. “I love that pain, I missed that pain and now that I felt it, it’s given me a good start for the second phase of my running career. Watch out: Wesley’s back.”

But on this day it was an athlete seven years his junior, who arrived in Beirut just five weeks after clocking a PB of 2:09:16 at the Chicago Marathon, who reigned supreme.

El Aaraby had come to Beirut primarily for the World Military Marathon Championship, run in conjunction with this year’s race, and as such he was not on the radar of many elite runners. As a result, when he pushed the pace along shortly after 10 kilometres, they let him go.

El Aaraby ran behind one of the pacemakers until halfway, which he reached in 1:05:07, then ran most of the second half alone. Back in the pack, Korir’s rivals were still watching his every move, paying him more respect than he wanted as the Moroccan out front built an 88-second lead at halfway.

Up front, El Aaraby was churning out a relentless pace, reaching 30 kilometres in 1:32:33, at which point he had a lead of 1:36 on pursuers Felix Chemonges of Uganda and Deresa Geleta of Ethiopia.

His advantage was closed down in the final miles, but El Aaraby was still all alone at the finish, hitting it in 2:10:41 to take a single second off the event record set by Dominic Rutto of Kenya in 2017.

“It’s a big result for me to be first in the World Military Championship and to break the course record,” said El Aaraby. “This result came after hard training and big preparation.”

The women’s race was a much closer contest, with Medina Deme Armino waiting until the closing miles before exerting her superiority, the Ethiopian carving four minutes off her previous best to take victory in 2:29:31.

“I’m really happy because my best was 2:33 and that’s really something – to improve that much,” said Armino, whose time was less than a minute outside the course record of 2:28:38, set last year by Eunice Chumba. “The weather was good, and next time I’d like to break the course record and come back even stronger.”

Nazret Weldu Gebrehiwet finished a strong second in 2:29:48, which means the former track runner now holds the Eritrean records in the 400m, 10,000m and marathon – a rare combination.

“It’s a good day,” said Weldu. “In my first marathon, the picture in my mind of today will be one that helps me work hard in the future.”

Nesrine Njeim was the first Lebanese athlete to finish in the women’s race, clocking 3:07:56. “I’m so happy to be here,” she said. “It was great to run on the streets – it was perfect.”

Hussein Awada was the first Lebanese male across the line, clocking 2:31:42.

Poland’s Olga Kalendarova claimed the gold medal in the women’s World Military Marathon Championship, her 2:38:17 bringing her home ahead of countrywoman Aleksandra Lisowska (2:38:57).

On a day when 48,000 runners took to the streets across the various races, Iran’s Mohammad Jafar Muradi claimed the men’s half marathon title in 1:07:00, with the women’s crown staying in Lebanon through hometown hero Chirine Njeim, who won in 1:20:09.

“I hoped for a lot better but it is what it is,” said Njeim. “This is part of my training for the Houston Marathon and I’m happy to be here – no matter the race, this always means a lot to me.”

The men’s race was won in a nail-biting finish by Ahmad Al Ghoul, who came from behind in the final metres to pass Lebanese compatriot Edward Maalouf, both athletes clocked at 1:25:45. Hassan Dia impressed with a third-place finish, clocking a personal best of 1:30:30.