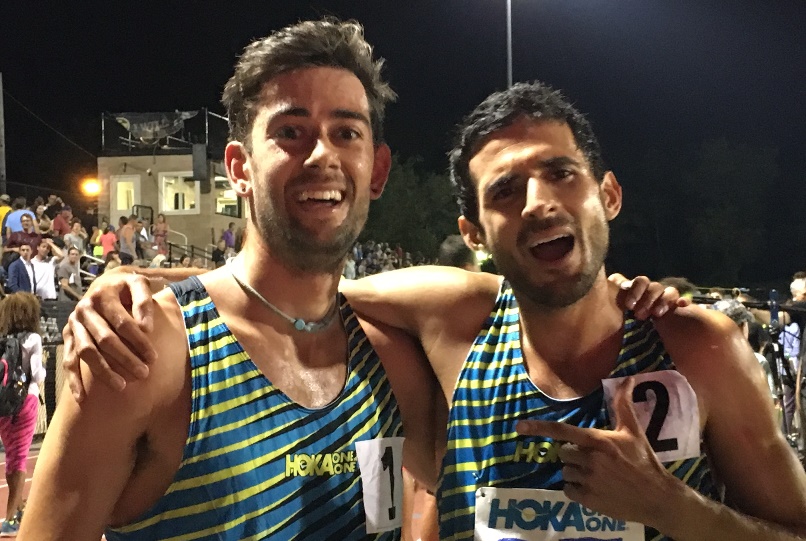 HUNTINGTON STATION, N.Y., USA (31-Aug) — With powerful homestretch runs, Amanda Eccleston and David Torrence retained their Hoka One One Long Island Mile titles here tonight at St. Anthony’s High School in warm, humid, and breezy conditions.  Eccleston clocked a meet record of 4:26.87, while Torrence ran 3:54.99, about two seconds slower than his the event record time of 3:53.91 he set last year.  About 1500 spectators, many of them standing on the track, watched the races.

Eccleston, 26, was content to follow the early tempo set by pacemaker Stephanie Herrick who took the lead pack through the quarter mile in a just-right 67.1 seconds.  Eccleston ran in the first third of the already strung-out field behind Shannon Osika, Lauren Johnson and Nicole Tully.

“I was just telling myself to be patient,” Eccleston told Race Results Weekly.  “I don’t want to go to early and blow up at the end.”

The halfway mark was reached in a still-honest 2:13.8, and there was no change in the running order.  Herrick pulled aside about 100 meters later, and Johnson took up the lead with Osika and Eccleston in tow.  Eccleston, who finished fourth at the 2016 USA Olympic Trials in the 1500m, felt confident and bided her time.

“I got a little antsy, wanting to make my move,” Eccleston said.  “Then when I went I wanted to make it hard enough that nobody would sneak up and kind of snag it.”

Eccleston races next at the New Balance Fifth Avenue Mile on Saturday.  She said she definitely saved something for that event.

“I don’t feel like I had to zap my legs on this one,” said Eccleston with a sly laugh.  “I’m ready for Fifth Ave. to fee a lot harder.”

Torrence, 30, who represented Peru in the Rio Olympics in the 5000m, had to battle harder than Eccleston to retain his title.  After the starter’s pistol failed and the athletes were called back to the line, Torrence was left flat-footed when the gun actually went off.

Pacemaker Declan Murray got the field through the first quarter in about 57 seconds with Canadian Olympian Charles Philibert-Thiboutot, meet director Kyle Merber, and former football player Ford Palmer up on front.  The pace softened to 59.1 seconds for the second quarter, then eased off even more in the third quarter (59.8) after Murray retired.  Torrence was in fifth position waiting for something to happen, when Philibert-Thiboutot made his play for victory.

“With about 300 meters to go Charles took off,” said Torrence.  “I was trying to match his speed and not push.  Then kind of like last year, repeat, he kind of started to fade.”

At the top of the homestretch Torrence seemed to pause as he came around the Canadian, then made one final surge for home.

“I was just digging hard that last 100 to hold everyone off,” Torrence said.  “Maybe I was taking a deep breath sort of, and then OK, give it all you’ve got.  And I could tell that Charles was kind of hurting a little bit.”