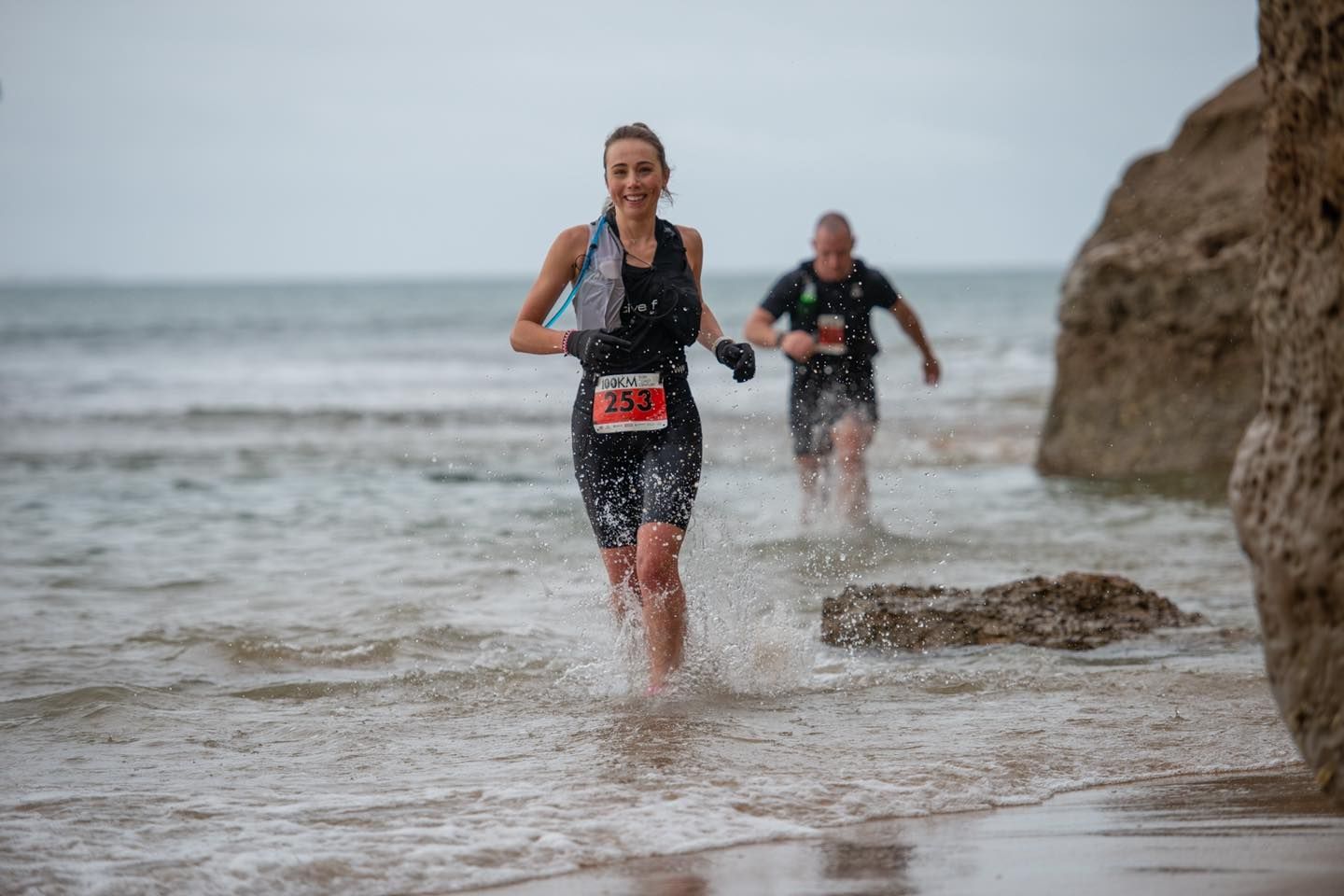 Dreams became a reality for the 1,000 competitors who took on the 11th edition of the Surf Coast Century ultra marathon in challenging weather conditions on Saturday 17 September 2022.

The spectacular 100km and 50km courses saw individual ultra-runners embark on a journey through the coastal trails and beaches of the Great Ocean Road region in Victoria; with relay teams runners sharing the 100km course, each covering approximately 25km.

The 100km premier race showcased some of the best ultra-runners across the country with Joshua Chugg from Western Australia and Geelong-local Nicole Virant taking line honours in the male and female fields, in times of 08:43:33 and 10:25:31, respectively.

In-form Chugg who won the Margaret River Ultra Marathon in May this year, looked very comfortable having not been on the Surf Coast Century course before, and took the lead into Leg 2 through Ironbark Basin.

“There were a few relay runners coming past me, so I took the opportunity to be pulled along by them into Leg 2 and that dragged me away giving me the edge,” said Chugg. “But Tom (Dade) and Zac (Beasley) were so strong on that rock hopping over the first 20km!”

“It’s such a beautiful course; I did try to take in the views when I could,” laughed Chugg who had 30 minutes on his nearest rival as he clocked his finish time.

In the female field, all eyes fell on Virant who went from not knowing anything about trail running, to winning her first ever ultra-marathon in just one year, an amazing feat by this young Geelong lady.

“This time last year I didn’t even know trail running was a thing so I’m quite new to it; but I keep feeling better and better over the distance whenever I go out, I just I love it!” said Virant.

“I come down the coast most weekends to get my running hours in and I just can’t get enough of it; I’m lucky I get to train on these beautiful trails that make up the course,” added Virant.

NSW athlete Kate Cush and Victorian-based Sarah Hedger, also a previous winner of the event, was third as they rounded out the podium in the overall female category in 10:42:42 and 10:53:08.

Another impressive female in the spotlight was Meghann Bullen (nee Coffey) from Western Australia who won last years’ Margaret River Ultra Marathon and was invited over to take on the Victorian’s.

“I wanted sub-5 hours so I’m pretty happy with that, but I’m buggered now!” said Bullen.

“It was gorgeous out on course; I loved the climbs, the single trails and the downhill faster sections. It was super fun even if it was super muddy!” added Bullen.

Running in the wind rain and mud has paid off for Steve Buchanan in the men’s 50km race, with a blistering time of 03:56:44!

“This was my first Century and to be honest I wasn’t going to do it, but I actually really like running in the wind, rain and mud – it makes me feel good – so I’m stoked with my win.” Said Buchanan.

The 100km course took competitors from Anglesea to Torquay along the beach, returning along the cliff top tracks and hinterland trails to Moggs Creek and Aireys Inlet, before heading back to Anglesea on the Surf Coast Walk trail, via Point Roadknight. The 50km course covered the second-half of the 100km – renowned for being more challenging that the first half!

Despite the wet and windy conditions, competitors continued to cross the finish line late into the evening, with the final 100km solo competitor finishing past 2:00am.

The event also saw a hotly contested 100km relay category with a number of teams vying for the course record of 07:15:41 set by Team ‘Love the Run’ back in 2015. In a nail-biting finish, after a cat and mouse style race, it was eventual winners, Team Dawn League clocking 07:17:19 – less than 2 minutes off the record, and just 5 minutes ahead of Western Australian contingent, Team Ogging Squad.

It was Dawn League’s Leg 4 runner Morgan Payne that eventually got the gap over the WA boys.

“I went strong over the climb near the lighthouse; and I like the climbing so I was able to put a bit of a gap on them and then held it along the final beach section,” said Payne.

Mathieu Dore who ran Leg 3 for the winner team, is also a solo runner in years gone past.

“The boys in front (Ogging Squad) did a terrific job, so I felt like I was chasing the whole leg,” said Dore. “However I was happy because I was right on pace with what I wanted to run; it’s always such a great weekend down here!”

Each race started and finished in Anglesea, with the support of the Surf Coast Shire behind the bucket-list event which is now one of Australia’s must-do ultras and known for being one of the more unique 100km courses.

Torquay-based event organisers Rapid Ascent were really impressed with every participants effort on course, and the supporters continually cheering them on.

“It was fantastic to see competitors’ raw emotions as they crossed that finish line in tough coastal conditions; achieving their dreams after many months of training,” said Event Director Sam Maffett.

“Added to that, the supporters who are out there doing what they do, never complaining and always cheering – it’s a real highlight for us,” added Maffett.

The Bethany Kids Run and Boat Ramp Battle headlined the Sunday morning celebrations prior to official presentations held at the Anglesea Surf Life Saving Club. Notable ultra-runner Thomas Dale who finished fourth in the 100km course was our winner of the concrete shoe trophy as he backed up his run on the epic Boat Ramp Battle.

The 2023 edition of the event is set for Saturday 16 September – entries to open early next year.