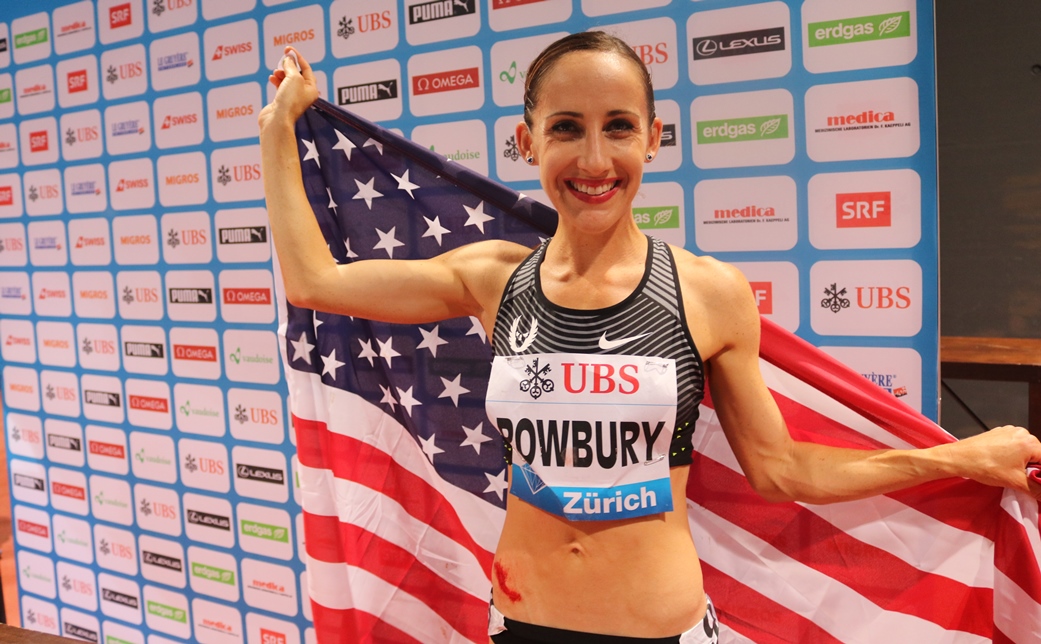 ZURICH (01-Sep) — Tonight’s Weltklasse was drama-filled with endless excitement, making for a perfect kick-off to the two-part IAAF Diamond League series finale. Shannon Rowbury picked up a 1500m victory by the skin of her arm over British record holder Laura Muir, falling to the track en route to a 3:57.78 win. Evan Jager nearly gave the USA a rare 5000m title, leading with a lap to go before Olympic bronze medalist Hagos Gebrhiwet picked the steeplechaser’s pocket. And Olympic champions Caster Semenya and Ruth Jebet each solidified their dominance across their respective disciplines, the 800m and 3000m steeplechase, with resounding wins.

After fireworks both on the track and in the exhilarating closing ceremony, noone left Letzigrund Stadium disappointed.

Two years ago at this very meet, Shannon Rowbury finished a devastating second place to Jenny Simpson by .01 of a second, the pair each falling to the track in sheer exhaustion. This year, Rowbury would once again find herself on the maroon track surface at the end of the race, yet was celebrating in victory. She’d rise to her feet bloodied and battered, happy to claim a win by seven-hundredths of a second over British record holder Laura Muir 3:57.78 to 3:57.85.

“My first priority was just trying to place well. As you mentioned I’ve never won a Diamond League final before nor a 1500m, so it’s a fun way to end the season with a 1500m [win],” she told Race Results Weekly, draped in an American flag while bright red blood dripped from wounds on her side.

Muir, coming off a sensational 3:55.22 national record run in Paris last Saturday, placed herself behind rabbit Jenny Meadows with Rowbury, Olympic gold medalist Faith Kipyegon, and Simpson all behind. The order remained relatively unchanged after laps of 1:02.59 and 1:05.51 (2:08.10 at 800) before entering the bell lap. Kipyegon jumped to the front, but it was a short-lived move.

With 200 meters to go, Simpson seemed to have momentum, swinging wide and matching Rowbury’s stride in the hunter position. Simpson couldn’t help but watch when her muscles tightened up, as her #1 American rival found another gear and was side-by-side with Muir down the stretch leading with 50 to go.

Muir gritted her teeth as Rowbury reached out her right arm just before crossing –then falling– over the line in 3:57.78, a season’s best.

“I felt people on the outside of me, bodies everywhere, and I just tried to take it all the way to the line,” Rowbury said. “Some more wounds, I think it’s become a trend when the 1500m final is here… At least this time I got the win for it!”

Though she would have liked to chase her own American record, Rowbury was glad she picked up a win.

“I was disappointed coming off the Olympics. Of course coming in fourth was heartbreaking, but I knew I was in great shape,” Rowbury said. “I knew tonight could be a good race.”

Muir was equally –or perhaps more– excited than Rowbury to finish second. Because Kipyegon had faded to seventh in 4:01.86, Muir earned enough Diamond League points to bypass the Kenyan into first. That meant Muir not only got the giant diamond trophy for the 1500m discipline, but also a bonus of $40,000 and a wildcard entry for next summer’s IAAF World Championships in London.

“It’s just surreal. I’ve still got to get my head around it,” said Muir. “To run at one Diamond League is big, big for me, and to win a couple and to be at the top at the very end, it’s very special.

Muir will next race at the New Balance Fifth Avenue Mile on Saturday in New York City in less than 48 hours time. It will be her debut at the iconic road race.

Four-time New Balance Fifth Avenue Mile champion Jenny Simpson was fourth in 3:58.54, and like Rowbury found herself on the ground due to an athlete clipping her from behind at the very end. Sifan Hassan edged Simpson in the final stride for third (3:58.43).

“I felt really solid coming up to the line and then down we all go,” said Simpson, who will defend her Fifth Avenue title in New York. “A little slower than Paris, but just really solid… I’m a little disappointed my last 100m wasn’t stronger, but it’s late in the season, I’ve accomplished a lot, and another sub-four — I’m happy with it.”

Departing from his traditional steeplechase event, Evan Jager figured he’d get in a fast 5000m at the close of his season here. With the pacers aiming for a sub-13:00 clocking, the Nike Bowerman Track Club athlete tucked in right behind the pair of rabbits only to realize that none of the other men in the field –including Olympic medalists Hagos Gebrhiwet and Paul Chelimo, as well as recent Paris 3000m winner Yomif Kejelcha– had gone with him.

“I was ready for a really fast, really hard race,” Jager said. “We thought the race was going to go fast, thought everyone wanted to run fast. I just tried to get off the line pretty hard and set myself in… But no one went out, it was the weirdest thing.”

Undaunted by the lack of challengers, Jager pressed on with pacers Hillary Maiyo and Cornelius Kangogo, reaching 3000m in 7:56.55 with close to a 100m lead on the peloton. Looking calm and collected, the Olympic silver medalist in the steeplechase ran 2:43.60 for the fourth kilometer. Shortly after, fatigue began to creep in.

“I tried to steal a win and kind of run free, relax as best I could, but I fell a little short,” said Jager, shaking out his limbs. “I think I started getting a little tired, a little worked up mentally and emotionally, I kept telling myself to cool down but it was hard. I started to hurt pretty good with 800m to go.”

Kejelcha and Gebrhiwet were leading the charge from behind, joined by Chelimo, Muktar Edris, Ryan Hill, Bernard Lagat, and many others. At the bell the group still had 10 or so meters to make up on Jager, a gap that would be sliced in half on the backstretch. Out of the turn, Gebrhiwet passed Jager for first, then Chelimo followed suit seconds later. The pair would finish one-two in 13:14.82 and 13:16.51, with Jager rounding out the top three holding on in 13:16.86.

“I think I could have a shot [at Jager], and I worked hard,” said Gebrhiwet, speaking in short, quick sentences. “The last 400m for me, we pushed, and I was happy.”

Jager’s early efforts drew the appreciation of the field.

“I was like, man, Evan’s got courage, you know? He went with it, and I learned from it,” Chelimo told reporters, giving credit to his USA teammate from Rio. In the end, Jager was pleased with the effort and the fact that he didn’t settle in.

“I just came up 100 meters short, which is brutal, but I’m happy with how I raced for sure,” he said.

After setting a steeplechase world record in Paris five days ago, Bahrain’s Ruth Jebet told reporters her season was over. She was tired after winning Olympic gold and running under nine minutes for the third time.

Yet organizers convinced her to show up and run for the $40,000 Diamond League title here, something she would do with ease. Jebet simply wanted to take care of business and defeat potential spoiler in Hyvin Kiyeng. In the second kilometer, Jebet slowly began to separate from Kiyeng and two other Kenyans.

Going to the front, Jebet narrowly avoided disaster when Stephanie Garcia got tripped from behind and took a tumble into the rail.

Running alone to victory over the final laps, Jebet broke Habiba Ghribi’s meeting record of 9:15.23 with relative ease in 9:07.00; her win also secured her the Diamond League crown. Kiyeng was second (9:10.15) with Emma Coburn third in 9:17.42. Once again –like in Paris– the order of finish was the same as at the Olympic Games.

“I am happy I won the race tonight and the Diamond Race too,” Jebet said. “When I beat the [meet] record it felt good, but I didn’t think I could be that fast.”

Speaking with Race Results Weekly, Coburn said the consistency of her runs is encouraging, especially considering it is now the end of the season.

“I’m happy to consistently be third. I’m going against two really, really good women and there are several other good Kenyans right there,” she said. “I’m proud that I’ve been third consistently the last three races. I think my last four races have been 9:18, 9:07, 9:10, 9:17, with one of those being a prelim, so I’m happy that consistently 9:15 feels totally reasonable and 9:10 is the expectation, and 9:05 is the goal. It’s good to make that jump [in time].”

With a scheduled pace for 400 meters in 55 to 55.5 seconds, some pundits had thought a world record chase would be on in the women’s 800m. That was far from South African Olympic champion Caster Semenya’s mind, though.

Hitting 400 meters in 55.37, Semenya took over the lead from the pacer and kept fellow Olympic medalists Francine Niyonsaba (silver) and Margaret Wambui (bronze) behind her the entire time. Though her stride looked consistent and without fatigue, Semenya slowed steadily in the challenging second lap.

“It was a very hard race to run,” Semenya said. “It was a fantastic race, you know. I’ve been maintaining throughout the season, 1:55 and 1:56. It’s been a fantastic season, what more can you ask for?

“At the end of the day it’s all about business and you have to get down to business, try to collect as much points as you can,” said the newly crowned Diamond League champion. “Now it’s all about going home to enjoy.”

Poland’s Joanna Jozwik (1:58.21) and American Kate Grace (1:58.28) were next across the line. Grace, who moved up well in the final 200m, said she accomplished both her goals heading into the race: run a lifetime best and take down some of the women who defeated her in the Olympic final.

“I wanted to show that I could be in the mix,” said Grace. “For what that race was, I’m happy with how I closed. I’m definitely feeling lactic [acid] right now, so I pushed my body. I competed and passed a few women in the last few meters.”

The final IAAF Diamond League meet of 2016 will be held in Brussels on Friday, September 9. 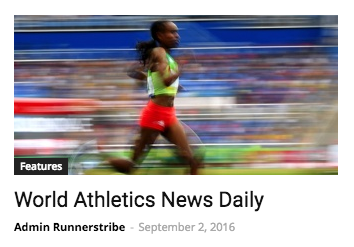 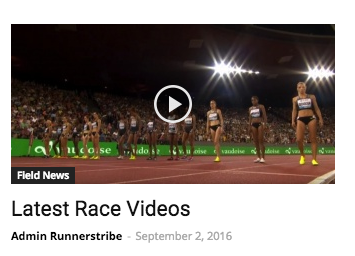 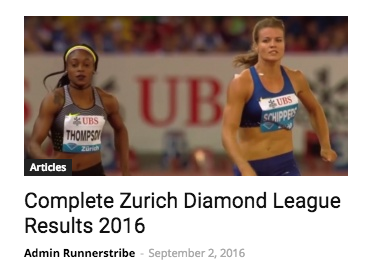