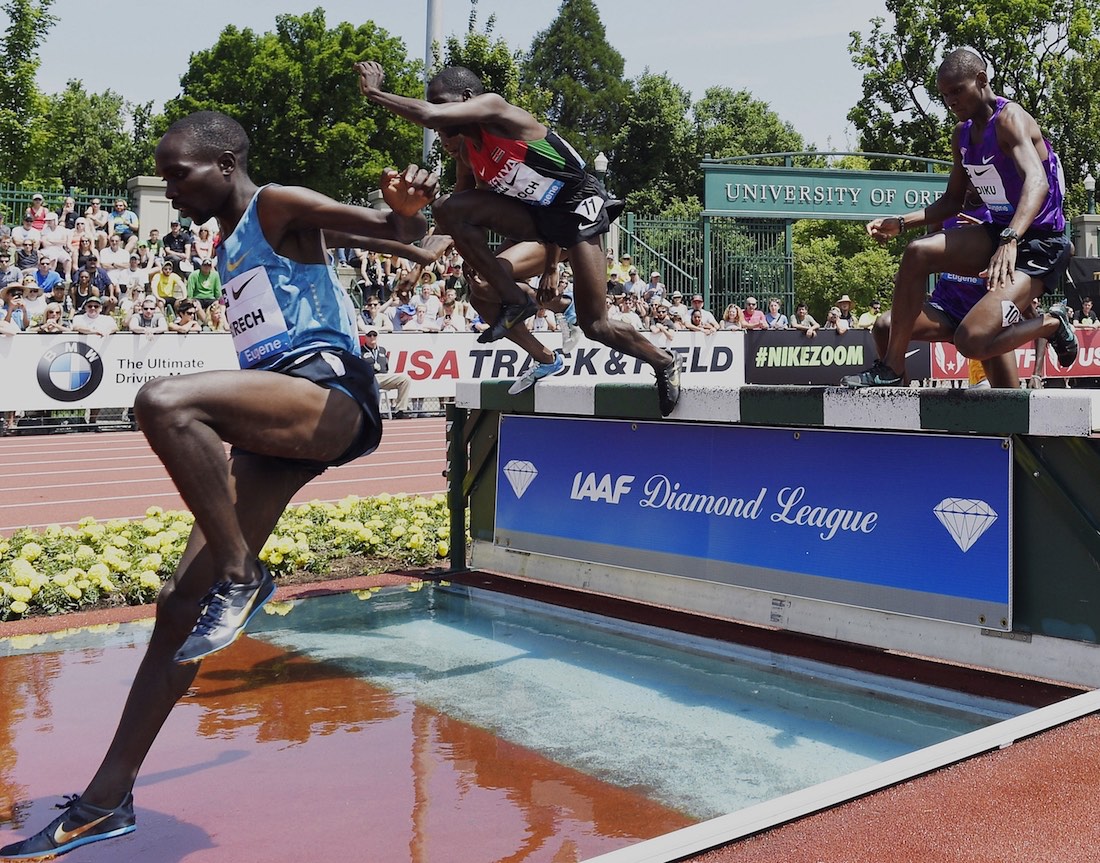 EUGENE, ORE. (26-May) — Heading into the second to last water barrier of the 3000m steeplechase here tonight on the first day of the 42nd Prefontaine Classic, 18 year-old Celphine Chespol was battling with reigning Olympic champion and world record holder Ruth Jebet of Bahrain and Kenyan compatriot Beatrice Chepkoech for the win.  The pace was fast, and although the world record had slipped out of reach, the trio were running well under nine-minute pace.

All three women cleared the barrier and the water pit, but as Jebet and Chepkoech headed around the Bowerman Curve, Chespol came to a full stop at the exit of the water pit.  The heel of her right shoe had come off, and she had to bend down to put it back on.  She was fully stopped for about three seconds, but was determined to get back into the race.

“It was difficult, but I tried my best,” said Chespol who only speaks limited English.

Although the teenager from Mt. Elgon lost perhaps 15 meters, she was undeterred.  Flying down the homestretch, she quickly closed up on Jebet and Chepkoech, and when the bell was rung for the final lap, she was only slightly behind.

Remarkably, with about 200 meters to go, Chespol took the lead, then sprinted away from her two rivals to get the win in 8:58.78, a pending IAAF world under-20 record, the second-fastest performance of all-time, and the fastest-ever performance on U.S. soil.  Chespol, who wears her hair closely shaved, surpassed her own pending world U20 marks of 9:07.08 from Shanghai and 9:05.70 from Doha earlier this season.

“Yeah, I’m happy of course,” said Chespol who was still trying to process exactly what had happened.

“I’m a little bummed I didn’t get my record,” said Coburn who is coached by her fiance Joe Bosshard.  “After Doha, I thought I could run right around 9:10, maybe close to 9:07.  But, I thought anything around 9:10 would be a good day, and anything under it would be a great day.”

In the women’s 5000m, a world record attempt by Genzebe Dibaba fizzled after the designated pacemakers –in Dibaba’s judgement– failed to go a good job.  Mary Kuria of Kenya and Meraf Bahta of Sweden took out the first lap in a swift 66.8 seconds, and the first kilometer in 2:51-flat.  Kuria soon retired, leaving Bahta and Dibaba running together with the rest of the field well behind.  The pair reached the halfway mark in about 7:12 well off of the pace needed to surpass the 14:11.15 world record of Tirunesh Dibaba.

Bahta pulled off the track with six laps to go.  Dibaba went through 3000m in 8:39.21, and then soldiered on alone to get the win in 14:25.22.  It was an excellent performance, she left the track dissatisfied.

“I’m happy I won, but I’m not happy about the time,” Dibaba said through a translator, Netsanet Debebe.  “It was a perfect condition for running, but things didn’t go as planned. The pacemakers didn’t do well, and I’m a bit disappointed about that.”

“I just want to see where I am,” said an exhausted Hassan, the 2017 NYRR Wanamaker Mile champion.  She added: “The last three laps I was, like, done.”

American record holder Molly Huddle finished eight in 15:09.09.  She said she felt flat after coming down from altitude only yesterday.

“I just didn’t feel good,” Huddle told reporters. She continued: “We just came down from altitude and sometimes I can have a dud after that.”

Charlene Lipsey scored a decisive win in the women’s 800m, clocking 1:59.87 ahead of Olympian Chrishuna Williams (2:00.62) and high schooler Samantha Watson (2:01.47).  For the 25 year-old Lipsey, tonight’s performance was her first sub-2:00 mark on an outdoor oval, backing up the excellent 1:58.64 she ran during the indoor season.  She said her goal tonight was to compete well, and not try to run any particular time.

“My coach (Derek Thompson), he don’t really believe in times,” Lipsey told reporters.  “Like, do whatever you got to do to win.”

Canada’s Gabriele Stafford took the women’s 1500m in 4:07.43, just under the IAAF World Championships qualifying standard of 4:07.50.  She pulled away from American Emily Lipari and Canadian compatriot Sasha Gollish in the final 200 meters.

“This race I really wanted to actually race,” said Stafford who was pleased with her tactics.  “With 250 to go, I saw an opening and I took it.  I’m glad I did; I just made the world standard.”

American Katie Mackey came from fourth to second in the homestretch, clocking 4:07.79.

“I’ve been working on that,” said Mackey who has been trying to build up her closing speed.

Tonight’s session was called Joan Benoit Samuelson Night after the first women to win an Olympic Games Marathon, and only women’s events were contested.  Samuelson, who just turned 60, was on hand and received a warm welcome from the fans at Hayward.

“It’s really great to be back here,” Samuelson told the crowd after a short video showing her Olympic victory was played on the stadium’s video monitors.  “I think dreams can come true.  I ran that race on a wing and a prayer.”

The 42nd Prefontaine Classic concludes tomorrow at Hayward field.  The meet will be capped by the Bowerman Mile.