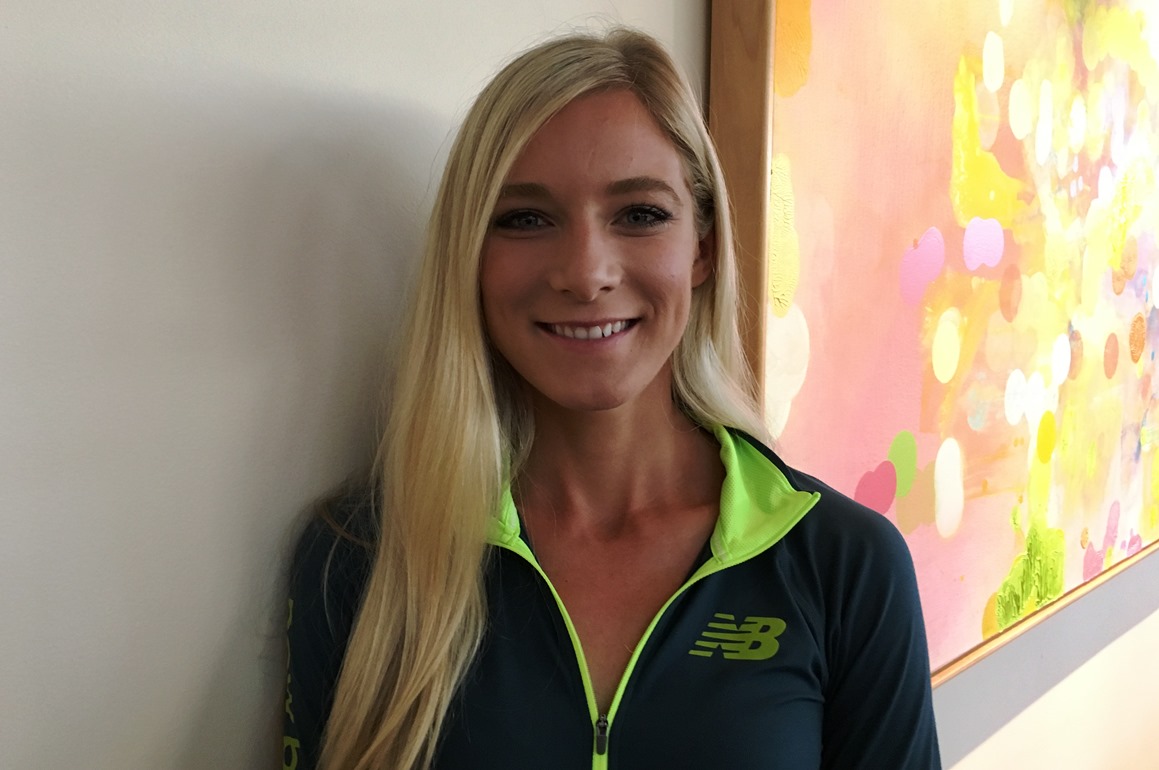 SACRAMENTO, Calif. (21-Jun) — The last time the USATF National Outdoor Track & Field Championships were held here at Hornet Stadium at Sacramento State University, the women’s steeplechase final was contested on a Saturday afternoon.  The sun was blazing, and the temperature was 91°F (33°C) when the 14 women who competed answered the starter’s gun.

Nonetheless, Emma Coburn of Boulder, Colo., boldly ran away from the field setting a quick pace.  She clocked a championships record 9:19.72, beat her nearest competitor by eight seconds, and bagged what was then her third national steeplechase title (she now has five).

Is Coburn, who runs for Team New Balance, a gifted hot weather runner?

“I hate the heat,” Coburn told reporters today at a press conference, the day before running her in her preliminary heat.  “I grew up in the mountains.  I love 60 degrees.  If I can be in shorts and a long sleeve, that’s ideal.”

Thus for the 26 year-old Coburn, who grew up in Crested Butte, Colo., tomorrow’s conditions will be much less than ideal, despite the fact that USA Track & Field officials have pushed back tomorrow’s nighttime program by a full hour to help athletes avoid the worst temperatures.  Nonetheless, after a projected afternoon high of 107°F (42°C), the temperature will still be about 96°F (36°C), according to Weather.com, at the time of her race at 8:13 p.m.  Coburn said she will be ready, taking precautions like wearing an ice vest and staying hydrated.

“I have had many experiences racing in the heat, flashing back to collegiate racing in the Regionals in Austin, Tex.,” said Coburn, recalling her days as a student-athlete at the University of Colorado.  She added: “As long as I prepare well… I can do pretty well.”

Coburn, who won a bronze medal at the Rio Olympics and holds the USA record of 9:07.63, may well be the #1 favorite at these championships to retain her title.  She’s competed sparingly this year, only running two steeples, but both have been fast.  She clocked 9:14.53 at the Doha Diamond League meeting on May 5th in her season opener, then came very close to her national record at the Prefontaine Classic on May 26th, clocking 9:07.96.  She feels that she is rounding into shape on the right schedule, and will be prepared to run faster later this summer.

“I usually open up around Pre and USA’s some years,” Coburn explained.  “I feel like I’ve been the fittest I’ve ever been at this point in the year.”

This is Coburn’s first season training along side Jamaican steepler Aisha Praught-Leer and under the coaching direction of her fiance, Joe Bosshard.  Bosshard, who was Coburn’s teammate at the University of Colorado, took over from Coburn’s longtime and college coaches Mark Wetmore and Heather Burroughs, a transition which Coburn said has gone smoothly and has felt very natural.

“Mark and Heather got me to where I was and were a big part of my life for eight years,” Coburn told Race Results Weekly.  “I wasn’t seeking out a coaching change, but it worked out to be that way.  Joe, I wasn’t looking for him to be my coach at all, but he was kind of in this space where I needed someone and thought, well, let’s try it for a short time… and see how it goes.”  She added: “It’s been going really well.”

Despite being heavily favored to win here, Coburn said she won’t be taking a relaxed attitude towards the race.  With 28 barriers and seven water jumps to clear, she can’t afford to lose focus.

“The steeplechase is wonderful event and a horrible event,” Coburn quipped.  “Because of the barriers anything can happen.”  She added: “That keeps me guarded; that keeps me focused on the task at hand.”