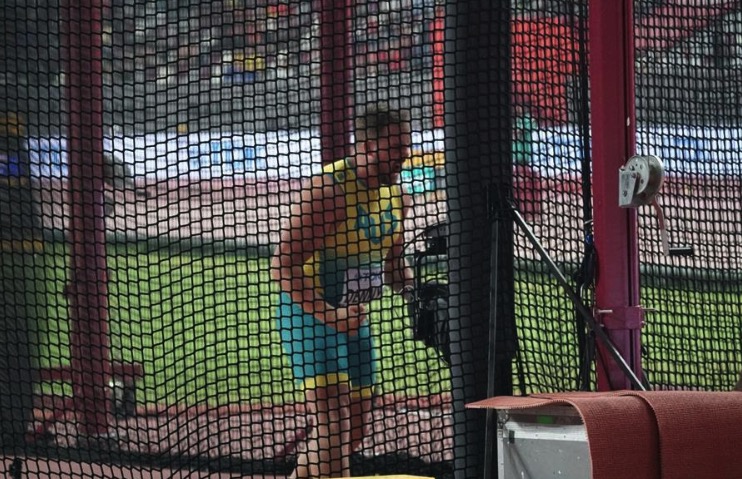 It was a night of finals for Athletics Australia on Day Four of the IAAF World Athletics Championships Doha 2019, as Stewart McSweyn (5000m), Matthew Denny (Discus) and Genevieve Gregson (3000m steeple chase) all took on the very best in the world.

Stepping into the cage ready to go, Denny wasted no time in laying down a marker in his first ever World Championship final, throwing a new personal best of 65.43m with his first attempt.  With further throws of 63.03 and 64.38 in rounds two and four respectively, he finish in sixth place.

Not a bad night’s work for Matthew Deeny, sixth place in the World Championship Final and a NEW Personal Best of 65.43m 🙌🙌🙌

“A PB is a PB, but it’s still frustrating that I didn’t get the one that I wanted.  It was frustrating because I felt that if I hit the one how I was feeling the other day and today I could have been up there in the top three.  Sixth is still good for my first World Champs, so I’ve just got to build on that for Tokyo.

“Coming into the Champs I threw further in training and I thought I was ready to throw further again, but I just couldn’t find that throw and the one throw that I did feel like I found it on I slipped off the back and it ended up a 63m.

“This year was a good year, I was consistent, a first PB in three years and a World Champs Final.  I’ll watch my boy Brandon (Starc) compete then I’ll head home and do some Uni stuff before focusing on Tokyo.”

Injured throughout most of 2019, even making the Australian team for Doha was a monumental effort from Genevieve Gregson, let alone making the World Championship final.  Beatrice Chepkoech, the eventual winner, went off at blistering pace to set new 3000m steeplechase championship record of 8:57.84.  Gregson finished in 10th place and set a new season’s best of 9:23.84.

“That was awesome,” said the Australian co-Captain.  “It was such an experience to be back out there, the crowd is nowhere near as big as I am used to at World Champs, but the feeling never gets old.  I had Goosebumps when I ran out.  I don’t think there’s a better feeling for an elite athlete than representing your country and I am just so grateful to be on that start line and give it everything.  I hope that today was an example that others on the team can look up too.”

In his first world championships since switching from the steeplechase, Stewart McSweyn came home in 12th place in the 5000m, clocking a time of 13:30.41.  “That was tough,” he said postrace.   “My aim was to stay on the lead group for as long as I can and put myself in a position to be competitive.  I hung on for as long as I could, but at about six laps to go I was gassed.  But I am proud I kept up as long as I could.  I gave it everything, no excuses, I just wasn’t good enough this time.

“I’ll be taking it easy over the next few days, I’ve got big goals for the 1,500m as well.  The first step is getting through that heat, so I’ll get a massage and warm-down and I’ll be ready to go in a couple of days.”

In the Javelin, Kelsey-Lee Barber entered the fray for the first time at Doha 2019 and booked her place in Tuesday’s World Championship final.  With only two athletes achieving the automatic qualifying distance of 63.50, a first-round throw of 61.08m was enough to see her through, finishing in 10th place across both groups.

Out on the track, Bendere Oboya booked her place in the 400m semi-final finishing with a third place, running a new PB and a Tokyo Olympic qualifier in the process, clocking 51.21secs.  “I feel like there’s so much more to show,” she said after.  “In the back of my mind I was thinking, if I stay close to these girls I can maybe run a PB, and that worked.  Tokyo is ticked off, I can’t believe it.  I’m really happy about that.”

Bendere Oboya books her place in the 400m semi-final finishing in third place, running a new PB and a Tokyo Olympic qualifier in the process, clocking 51.21secs

Unfortunately, Bella O’Grady didn’t make it out of her heat and finished the race hobbling and in some discomfort, clocking 54.99 for eighth place.

Nick Hough was always fighting to get back in it after a slow start in the 110m hurdles, but sixth-place in his heat, with a time of 13.60secs, was just enough to see him through to the semi-finals, qualifying as the fourth-fastest runner up.

Hitting the track tomorrow will be Steven Solomon (400m); Lauren Boden, Sarah Carli and Sara Klein (400m hurdles) and Ben Buckingham (3000m steeplechase).  In the field, Brandon Starc and Joel Baden will be looking to qualify for the High Jump final.

The day is being broadcast live and exclusively by Eurosport Australia from 11:25pm – 2:15am.