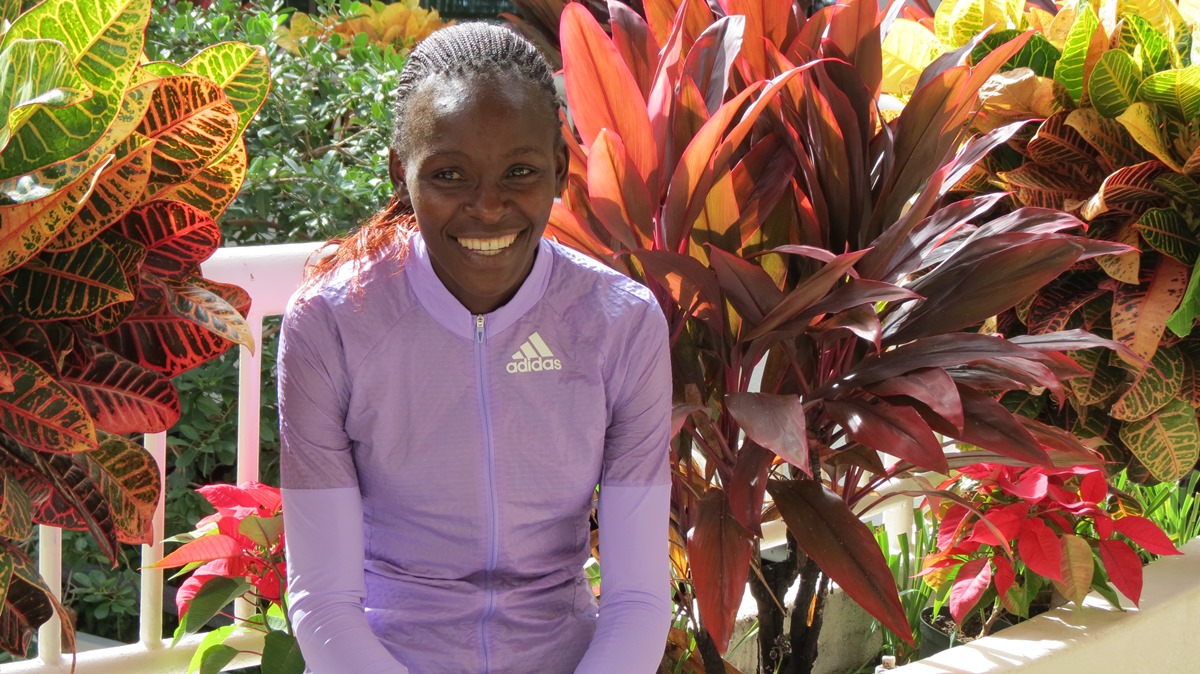 Passersby stop and point at the lithe Kenyan sporting a full track suit, knowing they are in the presence of one of the best distance runners in the world, with both Commonwealth and African 10,000m titles. A few ask for pictures, and one for an autograph. Even local vendors gets in on the action and want to shake hands with a star.

“I love it here and especially love the people, the nice people,” Chepkirui told a pair of reporters, sitting meters from the glistening coast in a hotel lobby. “I’m happy to be back here.”

Embraced by the natives, Chepkirui has come to feel at home here. She ranks Honolulu as the top spot she’s ever raced at, trumping cities like Boston, Amsterdam, and New York. It’s the charm and familial island spirit that Chepkirui enjoys through and through, not to mention the competitive race that will play out for the 43rd time here on Sunday.

After a somewhat rocky start to her marathon career, Chepkirui earned a win here twelve months ago in 2:30:23. It was a personal best by more than five minutes, and the first marathon win of her career. With that victory, Chepkirui said she gained a boost of confidence knowing she could successfully complete the marathon distance.

Having shaved an additional five minutes off her lifetime best by winning October’s Amsterdam Marathon in 2:24:11, Chepkirui is brimming with confidence and ready for Sunday’s race. She thinks a time of 2:28 is within reach, and will not rule out Lyubov Denisova’s event record of 2:27:19. But, Chepkirui quickly downplayed the thought of winning as not to jinx herself or risk coming off as arrogant.

“I am comfortable now with the distance, yes,” she began, choosing her words carefully. “I am not looking for a time, I just want to win.

She continued: “Last year I didn’t train hard like this year, so now I have experience… This year I have done real good, 35-40K [long] runs.”

Chepkirui is the favorite to capture the champion’s lei once again, though she’ll be challenged by China’s Zhang Yingying, Ethiopia’s Aheza Kiros and Woynishet Girma, as well as fellow Kenyans Lucy Karimi and Isabella Ochichi, an Olympic medalist. A victory on the streets of Honolulu would mean Chepkirui could invest some of the $40,000 winner’s check back home in Iten.

After last year’s triumph, Chepkirui spent her winnings on establishing a housing project in Kenya’s Rift Valley. Appropriately, Chepkirui named the project Aloha Estate, bringing a piece of Honolulu’s friendly spirit back to her homeland. According to her manager, Davor Savija, Aloha Estate even resembles houses here in Honolulu.

Speaking with Savija, one realizes just how much community and family mean to Chepkirui. Last year she returned home from Hawaii with new chainsaws, axes, and lawn mowers purchased from Home Depot, knowing they could go a long way back in her homeland. She speaks about husband Erick Kibet with a smile, having trained alongside him for most of her marathon build-up, and notes how son Brian wants to visit Hawaii.

Close to Chepkirui’s heart is the late Zane Branson, her manager for more than five years who passed away suddenly last July. This will be her first marathon without Branson supporting from the sideline. Following the race she plans to fly to Virginia to meet his family and express her condolences.

“Joyce is very competitive and loves competition,” said Savija. “Joyce is not one to show emotions, but she really was hurt by everything that happened. Many tears came down her cheeks.”

Nothing would be better than a win in his honor, a victory she can celebrate with the people of Hawaii and those back in Kenya.

“I was very happy [last year] and even my family, they were very happy. And I pray to God that maybe I can win again on Sunday,” she said.