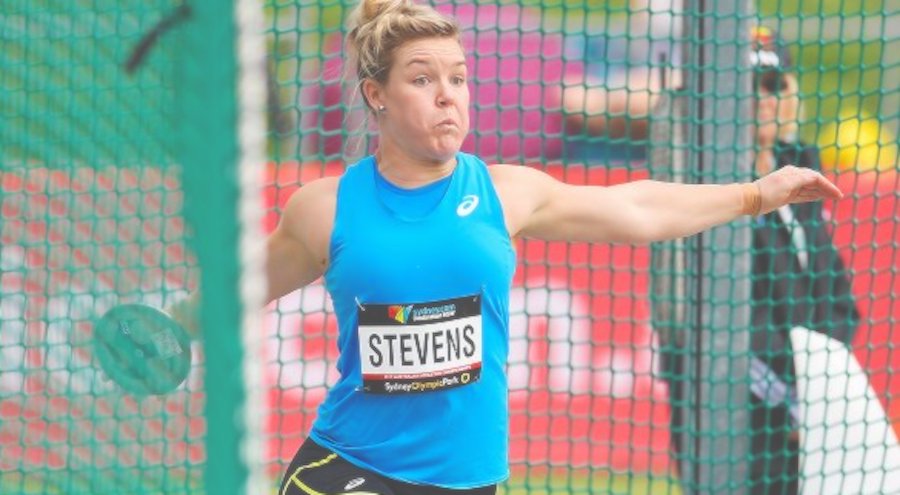 Dani Stevens (NSW, nee Samuels) is brimming with confidence after a 66.47m throw to place second in the women’s discus throw at the IAAF Diamond League in Shanghai (CHN) overnight.

Taking to the thrower’s circle alongside the men, as the event was combined for the first time, Stevens’ best mark came in the third round, with the Australian champion boasting a series that also featured throws 65.18m, 63.82m, 63.53m, 61.06m and a foul.

“It’s another second place, my fourth here in Shanghai, and it’s good to go near the win,” Stevens said.

“We were out there for a long time making for a difficult competition, but I really liked throwing alongside the men. I love throwing here. It’s a good circle and always a good competition. It’s nice to be consistent at 66-metres now.”

Stevens will prepare for the London 2017 IAAF World Championships in Sydney (NSW), remaining on home soil until her arrival at the Australian team camp at the Tonbridge School in Tonbridge (GBR) in August.

“I’m headed home now to keep preparing for London. I’m remaining in Australia this year, and then coming into the team camp in August,” Stevens added.

“I won’t be without competition though, there will be opportunities for me in Sydney and I have another few events scheduled in Queensland as well.”

Frustrated by the messiness of the race and because she missed the London 2017 qualifier, Hall was, however, happy to be racing again after a stint of training as she prepares for the Prefontaine Classic, where she ran 4:01.78 last year.

“It was great to be racing again, I love racing and was certainly starting to get tired of just training. It’s always exciting to come to big meets and rub shoulders with the top athletes and being out there today has got me excited for what’s to come,” Hall said.

“The race was frustrating though, no one went with the pace and it ended up being quite erratic and messy through the first half. I’m not happy with the result, my minimum goal tonight was the London qualifier and to miss by such a small margin is annoying.

“I’ve got the Pre Classic in a few weeks, so hopefully I can get it done there. It’s my favourite track in the world.”

Competing in the women’s 400m, the Australian one-lap champion Morgan Mitchell (Vic) clocked 52.23 to place 8th, as Shaunae Miller-Uibo (BAH) set a world lead of 49.77 to open her season.

Fabrice Lapierre (NSW) and Victoria Mitchell (NSW) rounded out the Australians in action, with neither having their best night. Lapierre jumped 7.74m for 10th in the men’s long jump, while Mitchell ran 10:16.72 in the women’s 3000m steeplechase.

For full results from Round 2 of the IAAF Diamond League in Shanghai (CHN), please click here.

The IAAF Diamond League now moves to Eugene (USA) on 26-27 May 2017, before competition in Europe heats up in June and July ahead of the IAAF World Championships in London (GBR).