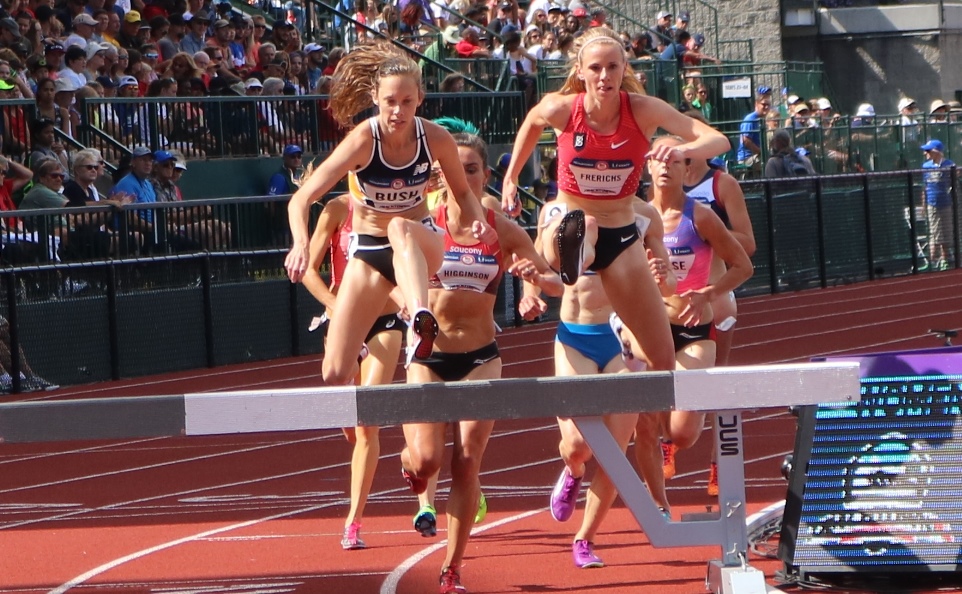 EUGENE, OR (06-Jul) — Wearing the Nike Bowerman Track Club uniform for the first time here Monday, Courtney Frerichs felt like everything had come full circle at the USA Olympic Trials at historic Hayward Field. Cruising easily through here 3000m steeplechase prelim, the 23-year-old made her professional debut look like a jaunt in the park, finishing in 9:40.98.

“Easiest 9:40 I’ve ever done!” she proclaimed with a smile, speaking with Race Results Weekly after he race.

Frerichs’s giddy tone wasn’t just because the race had gone as planned. It was a reflection on the past twelve months, which began with a stunning surprise that turned out to be a blessing in disguise. She couldn’t be happier now.

A year ago this week, Frerichs was caught somewhat by surprise when she learned that James Butler, her coach at the University of Missouri-Kansas City (UMKC), had decided to move on to the University of New Mexico and take a position under Lobo head coach Joe Franklin. In search of a place to complete her NCAA eligibility, Frerichs decided to follow Butler to altitude and train in Albuquerque.

“The transfer [at first] was really stressful and unexpected. A year ago July 3, I found out,” she said. What first was daunting soon turned spectacular. As soon as Frerichs arrived on the New Mexico campus she felt at home. What happened in the months since has only added to her happiness. “It’s been an interesting year but it’s been spectacular. The momentum just keeps building and keeps getting more exciting.

“Once I stepped foot there I knew it was the right place. Everyone was so welcoming and supportive and excited about me being there. I really got pushed by my teammates and got taken to the next level thanks to them and that environment.”

First, Frerichs helped lead the Lobos to the NCAA Cross Country team title last fall, crossing the line fourth to earn All-American honors. Adding to the memorable race-day, her boyfriend Griffin Humphreys got down on one knee and proposed moments after she hoisted the national championship trophy with her teammates.

More good things were ahead.

Out of NCAA eligibility indoors, Frerichs still ran a PB of 15:31.62 for 5000m. Then came a monstrous outdoor campaign where she capped off her NCAA career with a 9:24.41 mark to win the NCAA steeplechase title here in Eugene going away, breaking Jenny Simpson’s collegiate record of 9:25.54 in the process.

“I’ve raced so few times this year and so I still feel really fresh. Knowing that I ran that 9:24 solo, I’ve never run a race like that before. Just the confidence; I feel like I found that again today,” she said. “I put myself out there right at the beginning which is not like me. I’m excited to challenge it. I think the 9:24 was just a glimpse of what I can do, but I think there’s a lot more.”

Shortly after winning the NCAA title Frerichs signed with the athlete management agency, Kimbia Athletics, and soon she had an endorsement contract to run for the Nike-sponsored Bowerman Track Club in Beaverton, Ore., coached by Jerry Schumacher and Pascal Dobert. Though she has remained coached by Franklin through the Trials, she will transition to Schumacher shortly after the meet’s conclusion.

Frerichs was recruited by steepler Colleen Quigley to join the Bowerman Track Club, a tale that is both amusing and ironic. Both originally from Missouri and having raced one another in high school, Quigley kept in contact with Frerichs throughout college. During her time at Florida State, Quigley said she begged Frerichs to join her in Tallahassee; having few people to run with in steeplechase workouts, Quigley thought the pair could make a dynamic tandem in the collegiate ranks. Yet Frerichs was set on staying at UMKC, where she’d found success under Coach Butler.

Once Frerichs turned pro, Quigley tried again to convince her friend to train together. This time she succeeded.

“I tried to sell her on it [in college], but she was so loyal to Coach Butler that that was definitely not an option for her until she transferred,” Quigley told RRW with a laugh. “I’ve been working to get her as my training partner for sooo many years now and I finally got her!”

“I’m super pumped about it. It’ll be awesome to have the support system together,” Quigley added.

Anything that happens in the final is the cherry on top of a breakthrough year for Frerichs, though she reiterated she doesn’t want to settle for anything other than top-three. She has already far exceeded the Olympic qualifying standard of 9:45.00.

“I’m planning to try and run a PR,” she said. “I think that’s what it’s going to take. The race is a little later at night so that means the weather could be pretty good. The field is super talented so I’m excited to be a part of it.”

“I’m really excited. I haven’t been pushed; I’ve been able to close really fast this year because I have not been pushed in those middle laps. I’m excited to try and hold on and see what can happen. Regardless, this year’s been amazing and I’m excited to build on it.”

In a field that not only includes Quigley, Frerichs will have to face national record holder, Emma Coburn; 2012 Olympic steeplechasers Bridget Franek and Shalaya Kipp; 2015 World Championships finalist, Stephanie Garcia; 2013 national champion, Nicole Bush; and 2015 Pan Am Games steeplechase champion Ashley Higginson; and 2014 NCAA steeplechase champion, Leah O’Connor.  Making the top-3 here will be the biggest challenge of her career.

“Mentally I’m in a good position because there’s so much that’s happened this year that’s been amazing. Even if it doesn’t happen, I wouldn’t consider it a failure. But all of us have dreamed about this moment for a really long time. Of course I want it very bad,” Frerichs said. “It’s been a picture-perfect year. I couldn’t have asked for anything else.”