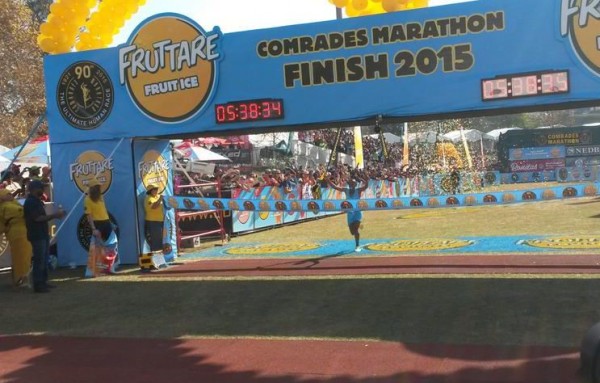 (08-Apr) — In what has been called a “bizarre” decision by some, and “baffling” by others, two of last year’s Comrades gold medalists have been banned for two years for using illegal substances — but one of them gets to keep his medal, his prize money, and his position in the race.

Joseph Mphuthi, who finished sixth in the 2015 Comrades Marathon, ran the race despite being provisionally suspended after having tested positive for the anabolic steroid Nandrolone at the Loskop 50 km in April, 2014 (where he finished second).

Citing “technical reasons”, an independent appeals tribunal decided that there had been irregularities in the implementation of the rules of the South African Institute for Drug-free Sport (SAIDS). The Comrades Marathon Association (CMA), organiser of South Afica’s largest ultramarathon, was therefore informed that the athlete would be allowed to keep his prize money (R35,000 or USD 2450) and his pure gold medal (worth another R22,000 or USD 1540).

The results of his drug test at the Loskop race were announced tenth months after the event.

The second athlete, Sandile Ngunuza, returned a positive test for Methylhexanamine after he had finished ninth in the Comrades. Both Mphuthi and Ngunuza have now been banned for two years, from July 2015 to July 2017.

The suspension of the two runners comes in the wake of a powerful warning to potential cheats recently issued by CMA General Manager Chris Fisher. Fisher issued a cautionary notice to all runners, saying that the issue of alleged cheating will be vigorously addressed.

Fisher said that race officials, marshals, volunteers and nearly twenty thousand runners will all be encouraged to be on the lookout to expose any cheats at this year’s Comrades Marathon on Sunday, 29 May.