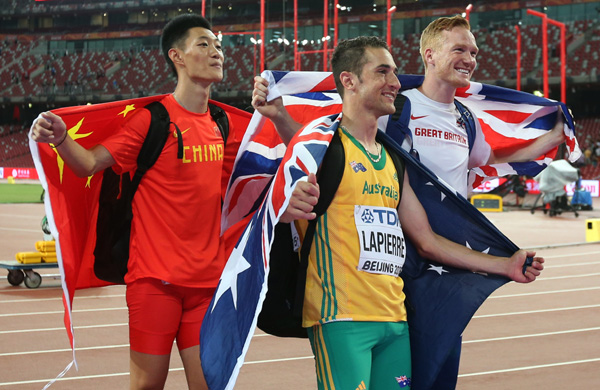 China’s teenage long jump star Wang Jianan will lead a quartet of homegrown talent against two of the world’s best leapers at the 2016 Shanghai Diamond League on 14 May, the meeting organisers announced today.

Wang was two days short of his 19th birthday when he bagged a bronze medal at the World Championships in Beijing last year, finishing just one place behind Australia’s Fabrice Lapierre with compatriots Gao Xinglong and Li Jinzhe filling places four and five.

All three will feature in Shanghai alongside Huang Changzhou, the 21-year-old who won world indoor bronze in Portland last month, as the best of China takes on Lapierre and last year’s world number one, Jeff Henderson, in what promises to be one of the highlights of China’s premier one-day athletics meeting.

Wang leapt an Asian junior record of 8.25m to finish a surprise third at the Shanghai meeting last year and went on to add the world bronze medal to the world junior title he won in 2014 and the Asian senior crown he picked up aged just 16 in 2013.

Wang will have to be on top form simply to win the domestic battle, however, as Li will be keen to re-assert his status as China’s number one. The 26-year-old finished fifth in Beijing after winning the Asian championships in 2014 when he also set the national record of 8.47m.

Gao was just out of the medals in Beijing last summer after claiming the 2015 Asian title in early June, while Huang was the man in form during the 2016 indoor season, when he placed third at the World Championships, sandwiched between Lapierre and Henderson.

Lapierre will start his Diamond League campaign full of confidence after breaking the Oceania indoor record to win silver in Portland, while Henderson will be looking to get back on track after he finished well out of the medals in Beijing last August.

The US athlete produced the three longest jumps in the world last year, including a world-leading leap of 8.52m to win the Pan American Games in Toronto but he failed to reproduce that form at the World Championships where he was ninth. Henderson was second in Shanghai last year, one of only two Diamond League meetings he contested in 2015.

More names will be announced for the 2016 Shanghai Diamond League meeting in the next few weeks.