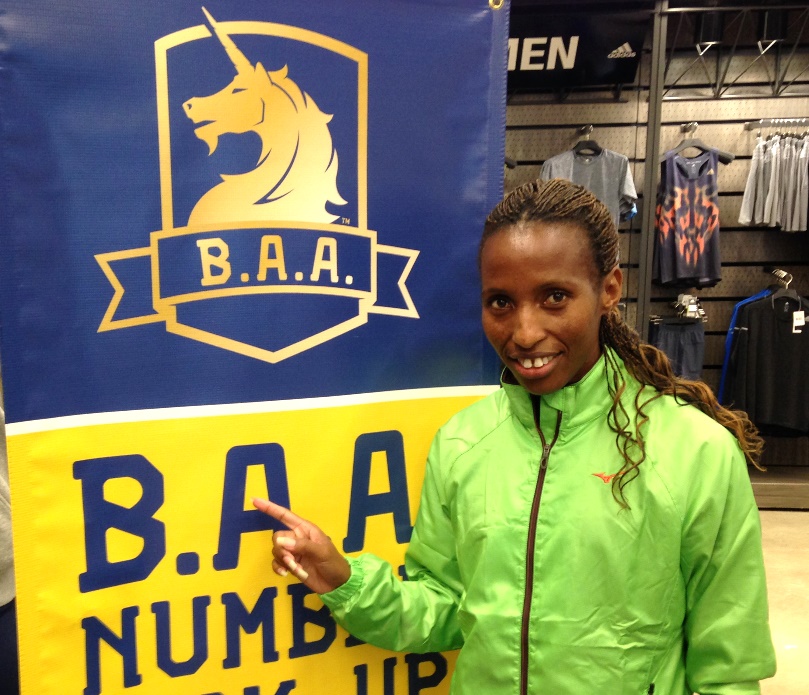 BOSTON (10-Oct) — In running, careers have a funny way of coming full circle. Sometimes when an athlete least expects it, she finds herself back where she began.

Such is the case for Caroline Rotich this weekend, back at the event she says launched her career to a new level. Rotich returns for Sunday’s B.A.A. Half-Marathon, presented by Dana-Farber Cancer Institute and the Jimmy Fund, five years after winning the 2010 edition in a then-event record of 1:10:54.

“The great feelings, I still have it. Lots of memories,” said Rotich, 31, speaking to Race Results Weekly after appearing at an athlete clinic at Boston Marathon adidas RunBase in Back Bay yesterday. “It’s good to be back, back where I started. Not where I started running, but where I started to run well.”

After teaming with coach Ryan Bolton in 2009, one of Rotich’s first true races was the B.A.A. Half-Marathon. She ran away from Olympian Janet Bawcom and Kenyan Jane Kibii en route to Franklin Park’s White Stadium, winning by 58 seconds.

Looking back some five years later, Rotich laughs at the thought of how her career would skyrocket in the subsequent years. She became a feared ace at the half-marathon distance, winning a pair of United Airlines NYC Half titles and lowering her personal best to 1:08:52. Earlier this year she reached new heights, adding the Boston Marathon title to her resume. The happy-go-lucky Rotich counts her blessings for her achievements since 2010.

“It’s crazy. When I won the Boston Half, it’s when I was new. I had just started training with my coach and I saw that my training is paying off and all that stuff. Since then I kept going to races and getting better and better. This is where it all started, that year was when we started to get better,” said a modest Rotich. “I’m excited. I love it here.”

“I can tell you, my coach used to tell me ‘If you win Boston or big races like that, your life is going to change and everything is going to change.’ I was like ‘Oh yeah. I don’t think too, too much.’ But I can tell you it has changed a lot. Everywhere you go people stop and talk to me and say good luck, and want to know more about running,” she said. “That’s one thing — I’m more inspired by it. Just how people are really into it, knowing it and wanting [to run more]. I go to the store and people stop me and that’s really good. It keeps me going.”

Rotich cherishes now being able to inspire all runners, no matter their ability. By winning Boston, Rotich now has a new-found elevated platform from which to spread the joys of running. She spoke of how sport can be uplifting in perfect English. The spirit of running has taken her from Nyahururu, Kenya, to Sendai Ikuei Gakuen High School in Japan (she speaks fluent Japanese); from her current training base in Santa Fe, N.M., to here on Boylston Street.

After giving the audience a play-by-play of her marathon victory –including the tale of not knowing where the finish was until the final strides– Rotich drew a hearty applause. She answered all sorts of questions, from the best breathing techniques to what to eat race morning and how to form a perfect strategy. Fellow elites Stephen Sambu and Daniel Salel listened intently, standing by her side. She savored the moment, like a musician on stage.

A man of about 50 came up to Rotich as she signed a final autographs and shared a story.

“I watch your sprint for inspiration. I don’t know how you sprinted so fast for so long to the finish,” he said, adding that he was on Boylston Street when she ran past and through the finish tape.

“You know, I don’t know how I did it either! I just kept going,” Rotich responded, the pair sharing a friendly laugh.

Rotich will use the B.A.A. Half-Marathon as her final tune-up for the TCS New York City Marathon on November 1. When the thought of becoming the first woman since Ingrid Kristiansen in 1989 to win the Boston and New York City Marathons in the same year is raised, Rotich lifts her eyes skyward. She knows it is a tall task. But as her career has shown, anything is possible.

“You know,” she began with a chuckle. “For me, it is going to be something [big]. Winning New York and winning Boston, everyone knows those races. I am looking forward to see what I can do out there, and see what happens. I am excited and ready for it.”

Here in Boston, Rotich feels at ease. She converses with participants as if they are close friends, and speaks of her adoration for the city that has played host to pivotal career moments. The city’s love and support will carry her through 13.1 miles on Sunday.

“Coming back, every time is good and awesome,” she told participants, offering up some last minute advice. “Make sure you have enough energy and are feeling yourself and know how much you still have left to go on the hills… Pace yourself. I am going to do the same thing Sunday!”
PHOTO: 2015 Boston Marathon champion Caroline Rotich of Kenya in advance of the 2015 B.A.A. Half-Marathon (photo by Chris Lotsbom for Race Results Weekly)