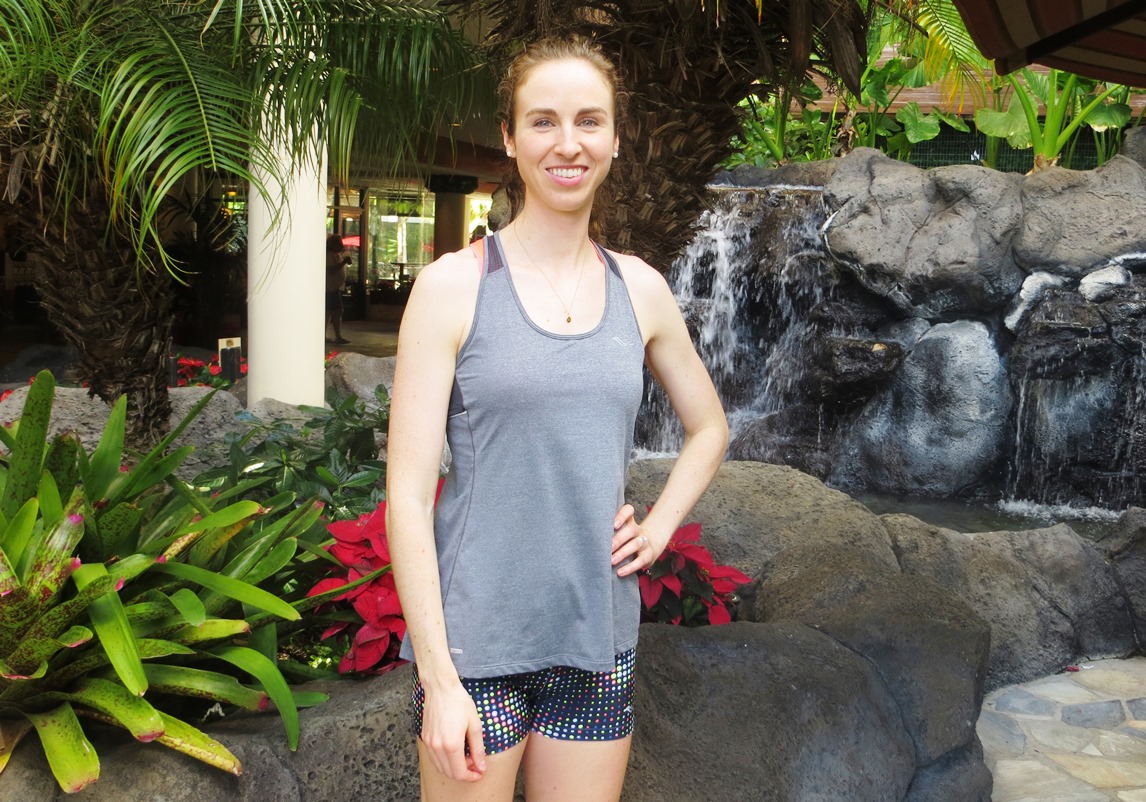 HONOLULU (10-Dec) — Up until last year, Canadian Olympian Nicole Sifuentes didn’t think she’d ever run a marathon. The distance was too long and too demanding, especially for someone who specializes in four laps of the track. Yet last year’s Honolulu Marathon began to shift Sifuentes’s mind a bit, having experienced the power of the event while pacing the elite women’s field.

“I used to say I’d never want to do one, but I don’t feel that way anymore,” Sifuentes, 29, told Race Results Weekly, speaking exclusively at a waterfront hotel. “Now I’d not say that. I will probably do one at some point. But I still don’t understand how women can run 5:30’s and under 5:30’s for 26 miles!”

Here for the second year in a row, Sifuentes cherishes the opportunity to be on Oahu as part of the race. Last year, coach Mike McGuire asked Sifuentes if she’d be interested in pacing part of the marathon. Honolulu Marathon president and CEO Jim Barahal and executive race director Jon Cross –who were McGuire’s teammates at the University of Michigan– thought it would be great to bring in an elite athlete with Michigan ties.  Sifuentes, competing for Michigan under her maiden name Edwards, was the Big Ten 1500m champion in 2008.

For more than three decades, McGuire, Barahal, Cross, former Michigan coach Ron Warhurst, and other former Michigan student-athletes have gathered here in December, taking part in race festivities and creating their own sort of family reunion. Sifuentes considers the chance to be part of the tradition an honor.

“Last year [McGuire] asked me if I could do it, maybe go ten miles. I’d never tried, and the longest tempo I’d ever done was four miles. But we did some longer tempos and I just came here,” she said. “This year I was like I’ll do that again!”

“I would be very happy if this turns into something that I could look forward to every single year,” added Sifuentes.

Unsure of what pace she’ll be asked to hold on Sunday, Sifuentes is keeping her mind open. She’ll likely lead between eight and ten miles depending on how she feels, and doesn’t in any way want to hold back defending champion Joyce Chepkurui, Chinese Olympian Zhang Yingying, Olympic silver medalist Isabella Ochichi and the rest of the women’s elite field.

Sifuentes’s journey here to Hawaii doubles as a business trip, as she’ll get to sit down with McGuire one-on-one and formulate a training plan and competition schedule for the upcoming year. The major goal is qualifying for her second Olympic Games in the 1500m, and lowering her 1500m personal best of 4:04.65 (under new IAAF standards released today, Sifuentes has achieved the Olympic Games 1500m qualifying time of 4:07.00 with her season’s best 4:06.44 from last August). Sifuentes will race an indoor season, and is excited to see what she can do to follow up her IAAF World Indoor Championships 1500m bronze medal from 2014.

“Last year I had a very disappointing [outdoor] year, but part of the reason why it was so disappointing is because I felt like I was capable of a lot more,” she said. “This year, based on all the work I’ve put in and what I was seeing in workouts last year, hopefully it will show when I race.

“We have a countdown clock in the Michigan pool, and every time I’m in the pool it’s this many days, hours, minutes, seconds to Rio. I think it’s the same for every athlete that is gearing up for the Olympics — how is anything else on your mind right now?” she said. “It just builds and builds and now we’re getting really close so everyone’s excited.”

Winning a low key indoor 5000m at Grand Valley State last weekend in 15:42.31, Sifuentes used the race to gauge her fitness. She feels confident, and is excited for the seasons ahead. In addition to the World Indoor Championships and Olympics, she’d love to better Lynn Williams’s Canadian national 1500m record of 4:00.27 (which has stood since 1985).

For the time being, though, she’ll enjoy her time here have fun leading the charge on Sunday. So when will Sifuentes race the marathon?

“I don’t know when,” she said, pondering the question a bit more. Former Canadian elite miler and current University of Michigan men’s coach Kevin Sullivan raced here in his debut a year ago, finishing 23rd overall in 2:40:22. He was paced by milers Nick Willis and Will Leer; all three are also currently in Honolulu.

“Sullivan did it last year… So I would say that it’s not out of the question [for me]. And he did a decent one!”