Home Latest News Calab lays down the law on Day 3 of the Australian Track... 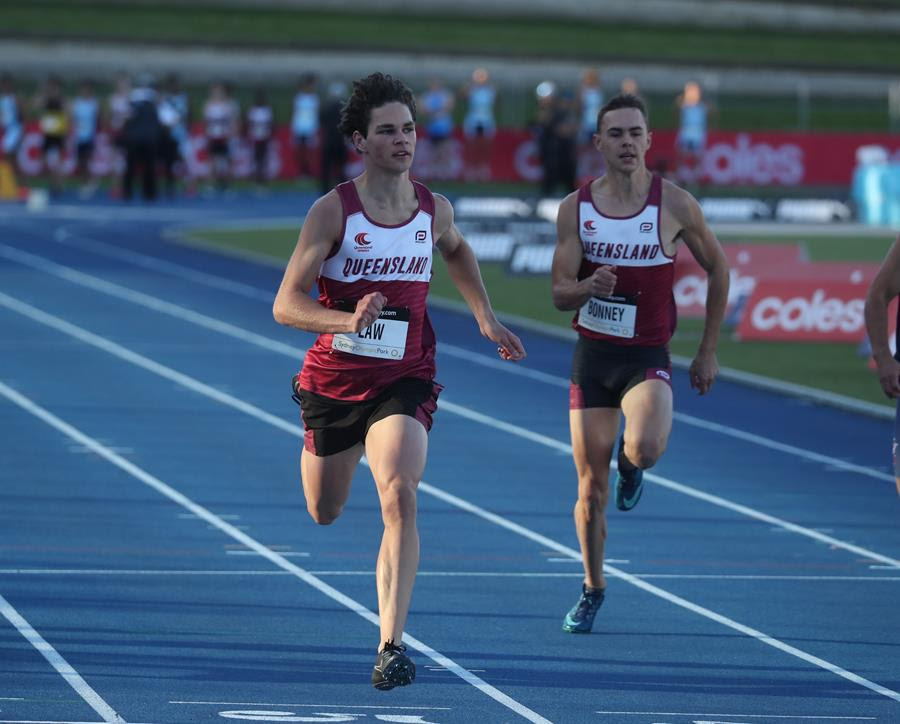 Sydney, Australia; April 14 2021 – The spotlight on day three of the Australian Track and Field Championships belonged to Queensland’s Calab Law, who stole the show when completing the sprint double in the Under 20 age group.

The feat was just one among a flurry of strong performances in the junior ranks as the action at Sydney Olympic Park warms up before the Open age titles and Olympic nomination trials begin tomorrow.

Law’s task was made easier by the disqualification of his Queensland teammate, Ashley Wong, in the preliminaries after he stepped out of his lane in an unfortunate turn of events. The 17-year-old flexed his strength over 200m to take an emphatic victory in a time of 21.12 – a new personal best and another World Under 20 Championships qualifier.

While Law guaranteed himself a spot on the World Under 20 Championships yesterday, he was most pleased with the way he launched out of the blocks.

“I felt nice and powerful all the way around the bend,” he said.

“I tightened up in the straight, but I pushed through and it all worked out.”

The Queenslander credits his progress to focusing on more “quick drills” during training, which is paying dividends for the gifted talent who is eyeing off his first Australian national team.

In the Women’s Under 20 200m, Caitlyn Ferrier of New South Wales established her dominance in the event when tearing away from the field to secure herself the national title in a time of 24.04. Tierney Dunne (NSW) finished in second place, with Victoria’s Miette Russell taking third.

In the field it was Lyvante Su’emai from Queensland who completed a double of her own, winning the Women’s Under 20 Discus to go with her title in the shot put yesterday. Su’emai was the firm favourite in the event and prevailed with a throw of 50.60m, but it wasn’t without a scare from South Australia’s Marley Raikiwasa.

Raikiwasa pulled out a clutch performance of 50.11m in the fifth round to keep Su’emai honest and was rewarded with the silver medal and yet another World Under 20 qualifier. New South Wales’ Sally Shorky finished in third place with a throw of 48.17m.

There were no casualties in the Men’s and Women’s Under 20 preliminaries of the 800m, with all the major players holding their nerve to navigate their way through to the final.

Charlie Jeffreson (NSW) produced a run full of confidence, biding his time before veering out into lane four and coasting down the home straight to win with ease. In the other preliminary final it was all Joshua Atkinson (NSW) who staked his claim as a major player in tomorrow’s final. The versatile talent backed in his 400m strength to lead early before fending off all challengers in the straight in an eye-catching run. Only 16-years-old, Jeffreson will take serious catching in the final if he can muster form remotely near his best.

Jaylah Hancock-Cameron (NSW) encountered no difficulties in her preliminary final after winning last night’s Under 20 1500m, progressing through the round in 2:08.97 ahead of New South Wales teammates Nicola Hogg and Matilda Ryan. In the second of the two affairs, Montana Molk (NSW) threw her hat in the ring as a contender for the national title when winning ahead of Victoria’s Gigi MacCagnini and Sidney Burrell of New South Wales. MacCagnini possesses the fastest time of the season to date but will have to play her cards to perfection in the final, coming up against six New South Wales athletes and Queensland’s Nyree Hamilton.

In the Men’s Under 20 Long Jump it was Victoria’s Amiru Chandrasena who jumped 7.50m in the fifth round to win the competition in what was a thrilling event for the crowd, with the young Victorian in exceptional form.

The Australian Track and Field Championships continue tomorrow with the beginning of the Open age events, which will see Tokyo hopefuls in action as they compete for Olympic and Paralympic qualifiers.