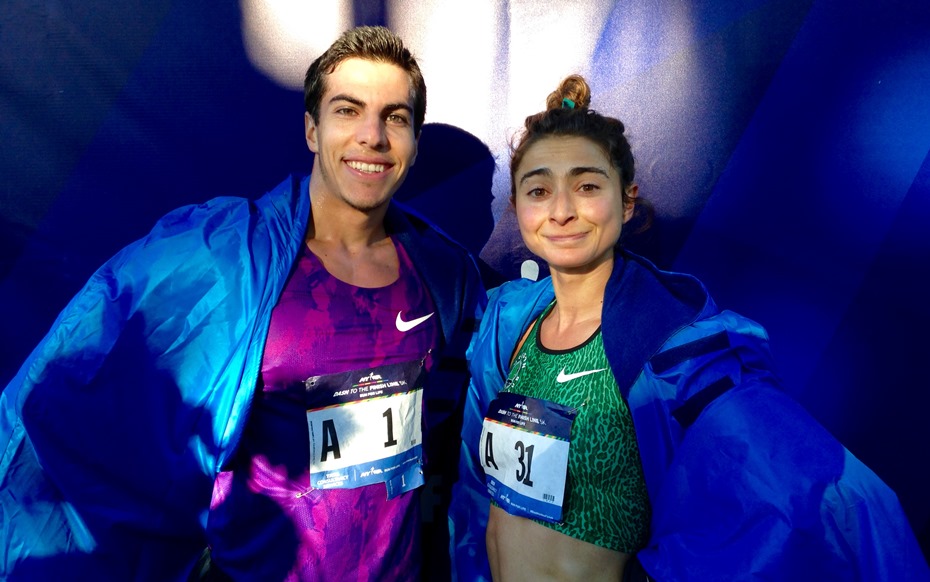 NEW YORK (31-Oct) — Donn Cabral and Alexi Pappas celebrated Halloween in style here this morning by winning the fourth annual NYRR Dash to the Finish Line 5-K in 14:19 and 15:59, respectively. Cabral successfully retained his title in a three-way sprint to the line, while Pappas held off a tough women’s pack for the win. The pair donned blue TCS New York City Marathon capes at the finish and, in fun, proclaimed themselves King and Queen of New York for the day.

On a picture perfect but chilly morning for racing, Cabral tucked himself inside the lead pack of 15 through the opening mile. Passing iconic Radio City Music Hall on Avenue of the Americas, the 2012 Olympian was behind Eritrea’s Yonas Mebrahtu, and side-by-side with New Jersey-New York Track Club teammates Travis Mahoney, Jake Hurysz, and Michael Jordan, among others.

Entering Central Park where the race would finish, the group remained compact. According to Cabral, Jordan took a turn leading, as did Hurysz. But it was Cabral –the seasoned and most accomplished veteran– with the best closing speed.

“This was an awesome race, awesome competition,” Cabral told Race Results Weekly, gripping the blue heat retention cape for warmth. “This year I felt the presence of the pack all the way to the finish line. My teammates with the New Jersey-New York Track Club did a great job pushing the whole way.”

Similar to last year, Cabral plans to use the victory here as a launching point for upcoming races. He’ll compete at the .US 12-K Championships in Virginia on November 15 and at the Manchester Road Race on Thanksgiving Day (Thursday, November 26).

“This is the fastest thing I’ve done in a while so it’s good race prep,” said Cabral, a native of Glastonbury, Conn. “Both of these races are kind of springboards to the Manchester Road Race, because I always want to give it a good go at Manchester. Hopefully I’ll have my strength down and all the niggles are out and I’ll be ready for Thanksgiving morning in Connecticut.”

Like the men, Pappas found herself in a tight women’s pack through the mile and two mile. Among those in contention for the win were steeplechaser Ashley Higginson, and all-purpose road racers Weynshet Weldetsadik and Salome Kosgei.

Grinding it out kilometer after kilometer, the 25-year-old Nike Oregon Track Club member saved a bit of energy for the hills in Central Park, where she broke from the field. Up the final incline to the finish, she hit another gear that gave her a comfortable cushion.

Pappas raised her black mittens high at the finish with 15:59 reading on the clock. Weldetsadik followed in 16:07, with Higginson third in 16:16.

“The 5-K, I can’t believe I’m saying this, feels short now. My college self would laugh at me if she saw me say that!” Pappas told RRW. “I felt like it was honest from the gun. You have to respect the hills of New York City, and I used the amazing crowds and scenery to carry through.”

She continued: “It’s worth it to take a risk and I think this is just another page in my book as I believe in myself. Who is capable of maybe doing the whole [marathon] one day. But I’m also believing in my speed, and that’s what it takes to win a race: strength and speed, belief, and a smile at the hardest part.”

Pappas has had a busy TCS New York City Marathon week: yesterday she hosted a very well-attended behind the scenes screening of “Tracktown: The Movie,” which she co-wrote, co-directed, and co-produced with Jeremy Teicher. At tomorrow’s marathon she will ride in the lead car ahead of the elite women’s field.

“It’s been a huge honor to be a part of this. It’s a race that I’ve admired for a long time from afar. To be asked to be in the lead car at such a historic event is a privilege and an honor and I’m so proud to be here,” she said, before turning her attention to the film. “Everybody feels like it’s the joining of the [running and film] worlds in the best way. Isn’t that what the New York Marathon’s all about, bringing people together. I’m very grateful.”

The always energetic Pappas was excited to win here today, but even more thrilled to receive the heat retention blanket upon finishing. A creative person who enjoys tinkering with fashion, she thought it’d make a perfect Queen’s costume for Halloween.

“This has to be the coolest part, I now have a cape! Perhaps it has to be my Halloween costume,” Pappas exclaimed. “I will be Queen of the Apple!”

“This is awesome,” Cabral said of the energetic marathon atmosphere. “One day I hope to not be running the baby race here but running the big boy race and mixing it up with some of the best in the world.”