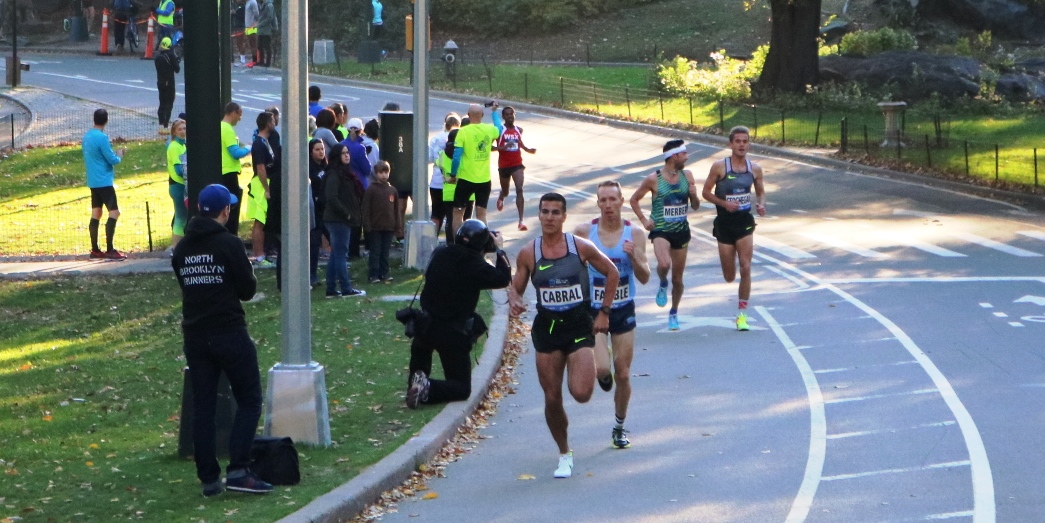 NEW YORK (05-Nov) — As has come to be tradition on TCS New York City Marathon weekend, Donn Cabral ran to another win here at the Abbott Dash to the Finish Line 5-K, scoring his third straight victory on the uphill course from the United Nations to Central Park in 14:19. Cabral was joined on the top step of the podium by Karoline Bjerkeli Grøvdal, as the 26-year-old continued a strong Norwegian tradition of excellence on the roads of New York by winning in 15:40.

“I just felt unbelievable, phenomenal,” said Cabral, a two-time Olympic steeplechase finalist who represents Nike. “It was still pretty darn close in those last 300 meters though.”

Wanting to complete the three-peat, Cabral said he had extra motivation to run hard from the start. Joined by a large pack at the mile in modest 4:49, Cabral settled in next to Hoka One One/Northern Arizona Elite’s Scott Fauble.

Cabral and Fauble both began to hit the gas pedal simultaneously, causing a distinct lead pack of seven to form. In a way the pack was reminiscent of Ivy League Championships of yesteryear: Cabral (a Princeton grad) was next to Kyle Merber (Columbia), Will Geoghegan (Dartmouth), and for a brief moment John Bleday (also of Dartmouth).

“We have a lot of scores to settle between the group of us; we’ve raced so many times,” Cabral joked. Today’s score would be decided in Central Park, with Cabral, Fauble, Merber, Geoghegan and Ethiopian Girma Bekele Gebre hitting two miles in 9:22.

Passing the Central Park Carousel with little over a kilometer remaining, Cabral made what wound up being the winning move. The Connecticut native got the slightest edge on Fauble going down one of Central Park’s gradual declines. The three-step lead would hold into the final 400 meters, the very same stretch of ground that more than 50,000 marathoners will cover tomorrow.

“Getting into the Park, I put the accelerator down and tried to grind as hard as I could from a long ways out. Donn was able to go with me, he knows the course a little better than me, and with about 400 meters to go I kind of lost where I was on the course,” said Fauble. “I didn’t quite have enough room to pull him back.”

“This race is awesome. It’s kind of like Valentine’s Day and Halloween are both linked to New York City because of the Millrose Games and Dash to the Finish. For me, it’s kind of a tradition, it starts getting nice and time to dress up, suit up with the bib on and go win the Dash to the Finish,” Cabral said. “It’s exciting and I hope to keep doing it.”

When asked what winning on Marathon weekend feels like, Cabral laughed and was honest.

“I feel like I’m cheating,” he began. “Running a 5-K in 14:17 or something, and crossing the [same finish] line, they should have a different finish line for those who run the 5-K because the people who run the marathon and cross this line, they’ve earned it a hell of a lot more than I have winning the 5-K.”

Both Cabral and Fauble will square off again at the Manchester Road Race in Connecticut on Thanksgiving. Fauble said that today’s second place was a good indication of his current fitness, and sets the framework for what he hopes to be a productive fall and winter; he will also be competing at the USA Club Cross Country Championships in December.

“I think I’m most encouraged by how easily I could accelerate and how I could push from a long ways out. That’s been something I’ve been working on,” said Fauble, who celebrated his birthday today. As part of the NYRR’s Lead Vehicle Program, Fauble will ride in the men’s lead car for tomorrow’s TCS New York City Marathon. For his first time in the city, he said there’s no better tour like the one he’s about to experience.

Eric Jenkins, winner of the New Balance Fifth Avenue Mile in September, was outside the top ten, finishing in 15:07.

Like Fauble, women’s champion Bjerkeli Grøvdal is in town to experience the marathon from the lead car. But she’s also soaking up the chance to compete in the same city where the legendary Norwegian marathoner Grete Waitz won nine titles from 1978 to 1988.

“The whole time I was chasing her like a little sister. I am a little sister in real life so I’m real good at that, so I channeled those instincts to chase for as long as you can!” said Pappas, last year’s winner. The closest Pappas got was 14 seconds at the finish, with Bjerkeli Grøvdal winning 15:40 to 15:54.

Bjerkeli Grøvdal previously represented the Norwegian club, SK Vidar, the club made famous by Grete Waitz.  At the beginning of the year, she switched to the rival club, IK Tjalve.

“It’s great to be here. I would love to run the marathon,” Bjerkeli Grøvdal said. Speaking of Waitz’s legacy, she shook her head in awe. “It’s big. It’s good to see her, someone like me [from Norway], can do something great in the United States. It’s made it easier for me to do it also [run the marathon]. I think it’s great and I’m proud that she’s Norwegian.”

Tomorrow, more than 50,000 runners are expected to finish the 46th running of the TCS New York City Marathon.