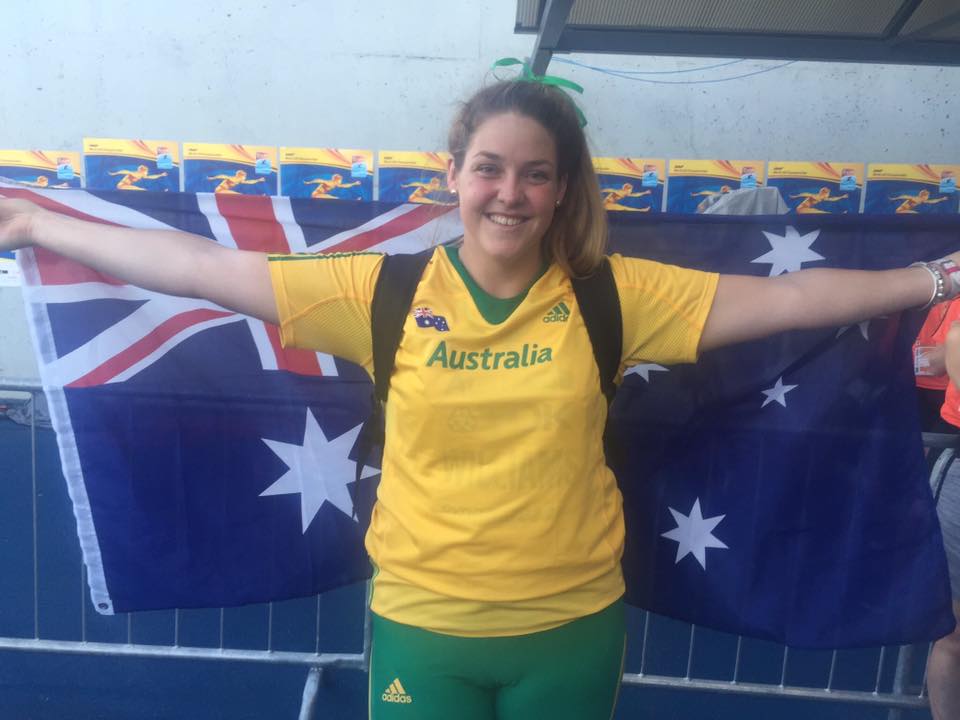 Discus thrower Kirsty Williams (QLD) has delivered Australia’s second medal on day three at the 2016 IAAF World U20 Championships in Bydgoszcz (POL) after a third round personal best of 53.91m secured the second spot on the podium.

“It was pretty incredible to hit a personal best, with that I grab the Queensland under-20 record, so I couldn’t be any happier with my competition,” Williams said.

“I came out with a silver and a personal best, everything I said I wanted to do. My first aim was top eight and to come away with this it’s just amazing.”

A second attempt foul didn’t deter Williams who on her third round throw produced the silver medal winning mark.

“My first throw was good, high 49’s, then the second throw didn’t quite get it and was a foul. That put me back a bit. My third throw could have been my last so I just went for it, got a personal best and the fourth one got taken by the wind, still happy with it.

For more information on the IAAF World Under 20 Championships, including the event timetable and live results, please click here.

It was an agonising wait for Jessica Thornton (NSW) as she stood on the track looking at the big screen waiting for confirmation of her time and place in a close finishing girl’s 400m final.

“When the legs are lactic as hell it doesn’t help hanging around waiting to know but I’m happy I got another personal best,” Thornton said.

Thornton produced her second consecutive personal best of the championships with a time of 52.05, delivering fourth place by the smallest of margins.

“All I came here to do is my best and I’ve done that so I’m happy no matter what.”

With a focus on making the final, Thornton was thrilled with how she progressed through the rounds.

“That was the plan, to make sure I got into the final and then do whatever I could. Yesterday did take a lot out of me with the personal best, as it would for anyone, so to get another one is very extraordinary,” Thornton added.

In the men’s 1500m final Matthew Ramsden (WA) had to deal with a rough pack and finished hard to place 6th overall with a time of 3:50.50. To put the run into perspective, Rio 2016 Olympic Games bound Ryan Gregson (VIC) ran 3:48.23 and finished fifth in the same venue at the 2008 IAAF World Junior Championships.

“Overall it has been an amazing experience, the atmosphere here is really great, some of the best boys in the world out there, it’s just awesome,” Williams said.

The experience has spurred him on to work hard and be back competing on the international stage.

“There is a lot of things I need to work on with my technique, so another 12 months of training and maybe I’ll get to London for the World Championships next year, it’s definitely a goal, even a relay team would be great.”

It was a personal best for Alana Yukich (WA) in the semi-final three of the girl’s 400m hurdles with a time of 59.20 to finish sixth, but unfortunately wasn’t enough to progress to the final.

On the first day of the heptathlon Alyssa Burnett (NSW) finished on 3318 points in 10th place ahead of Celeste Mucci (VIC), who heads into the second day of competition in 12th place with 3293 points.

SESSION ONE: MARSCHALL AND HULLEY PROGRESS TO FINAL WITH EASE

Australian under-20 pole vault record holder Kurtis Marschall (SA) delivered two clean jumps to finish with a mark of 5.30m in the qualification round and progress to the final on Saturday.

“I knew it would take quite a big jump to get me through to the final this time with heaps of boys ranked really high,” Marschall said.

The competition unfolded to see 13 athletes on 5.20m, ensuring that the field for the final was extended to 14 after Marschall cleared 5.30m.

“It was only going to be 12 in the final and 13 boys jumped 5.20m and I went up to them and said I haven’t jumped it. They let me jump and took the rest of the boys through to the final as well.”

It was a tough day for fellow pole vaulter Angus Armstrong (NSW) who missed out on qualifying for the final with a mark of 5.10m, his only clearance for the day, leaving him 15th overall.
Leading Australian junior hammer thrower Alex Hulley (NSW) produced a second round mark of 62.65m to progress to the day five final.

It was a bit of shaky start for Hulley who hit the ground with her hammer on the first attempt for distance of 55.05m.

“I was a little bit nervous, I just hit the ground with my hammer so something went wrong and it didn’t go far.”

With thanks to Chris Kenner