Home Latest News Branco and Mucci just outside the medals at World U20 Champs –... 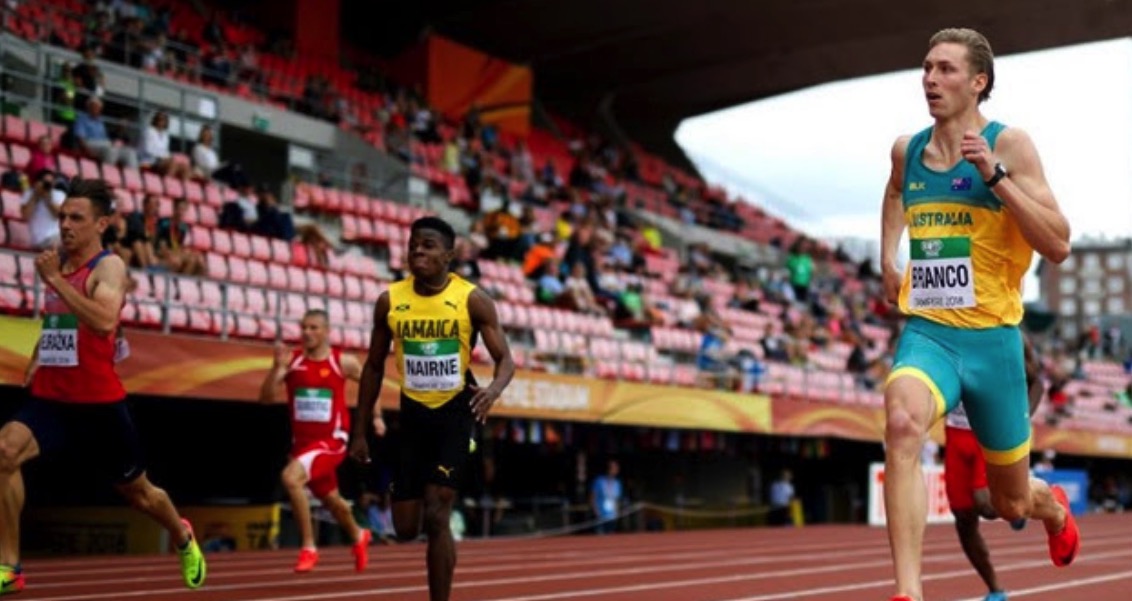 It was a dramatic and busy session for the Australian Team on Friday evening in Finland. The men’s relay team came unstuck in the final change, the women’s team snuck through and the heptathlon came down to the wire in pouring rain. Meanwhile, Zane Branco was a gallant fifth in the final of the 200m, the best performance in 20 years by an Australian in the event at the championships.

Branco just outside the medals in a closely fought 200m

Zane Branco (QLD) came into these championships with the fifth fastest U20 200m time in the world but no major event experience. In the 200m final he confirmed his class, placing fifth in 20.86 seconds and just 0.07 seconds off the bronze.

The day belonged to British sprinters Jono Efoloko (20.48) and Charles Dobson (20.57) who went ran away from the field to finish 1-2, with American Eric Harrison taking the bronze (20.79). Efoloko ran a personal best in all three rounds.

Branco was sandwiched between the Brits in lane 5 as Dobson on his inside led off the bend. The Australian tried to lift down the straight and looked a chance at bronze but it wasn’t to be.

The 18-year-old, who has made huge improvements in the past year, is the first Australian to make the 200m final at the World U20s in 20 years. Only Steve McBain in 1986 has ever made the podium (bronze). Branco’s time at Trials of 20.68 is the fourth fastest Australian U20 in history.
Mucci fifth and Newton-Smith 14th in high quality heptathlon

If the racing for medals in the 800m wasn’t going to be dramatic enough, to conclude two days of heptathlon action, the rain started pouring down.

Celeste Mucci (VIC) entered the final event in the mix for the medals, following a good long jump (6.13m) and personal best in the javelin (43.03m) to start the day. Sitting in 3rd place with 5163 pts she needed to hold off Cuban Adriana Rodriguez (5147) and strong 800m runner Adrianna Sulek (POL) who was sixth (5009).

Sulek attacked the race from the start, determined to get a medal, and created a big gap over Rodriguez, with Mucci further back, as they took the bell. The 18-year-old Mucci, who was fourth at the Gold Coast Commonwealth Games, summed all the energy she had left to try and bridge the gap and hold on to the bronze, but the other girls were too good.

Coached by Darren Clark, Mucci said she had been dreading the 800m for two days but upbeat about her fifth place at the World U20 Championships.

“I finished 17th last time and 5th this time, so I couldn’t be happier,” an exhausted and soaked Mucci said.

Her score and fifth place finish is the best by an Australian at the World U20s. She holds the Australian U20 record of 5915 from Gold Coast 2018.

Camryn Newton-Smith (Qld) finished her seven events in style with a new personal best in the 800m of 2:23.11 for 782pts. That brought the Queenslander’s total to a lifetime best score of 5487 to place equal 14th. It is also the second best score by an Australian, behind Mucci, at the World U20s. The multi-eventer, who is coached by her dad, was in 20th place overnight but on the second day went from strength to strength.

After opening the day with a long jump of 5.66m that moved her up one place to 19th, she launched the javelin out to a fabulous new personal best 44.97m for 763 pts which was the fourth best throw of the day. That huge performance rocketed the Beaudesert athlete up the charts to 15th spot entering the final event.

Newton-Smith said she was a “bundle of nerves” heading into the final event as she battled the wet conditions.

A gutsy run in the second heat of the 800m added 186 pts to Newton-Smith’s score from the Queensland championships back in January as moved up to 5th on the Australian Under 20 all-time list.

Only two points separated Niamh Emerson (GBR) and defending champion Sarah Lagger (AUT) into the 800. Despite the rain, both athletes pushed each other to 800m personal bests in the 800m, with Emerson rewarded for her bravery in leading out Lagger to take the 800m in 2:09.74 with Lagger 2nd in 2:11.53.

Emerson, who won bronze at the Gold Coast Commonwealth Games, claimed the World U20 title with 6253 points, from Lagger with an Austrian record 6225.

Since running 10:10 in March, McAvoy has run three times under that mark and become the fourth fastest in Australian junior history. Her heat time in Tampere was 16 seconds faster than any Aussie previously at these championships, a rarefied performance for the Queenslander.

Teammate Erbacher has also been impressive. In the heats in Tampere she ran a nine second personal best time of 10:09.43 to become the fifth fastest Australian ever and was again under her pre-championship personal best in the final.

Kenyan Celliphine Chepteek Chespol confirmed her status as one of the best athletes in the world with a championship record of 9:12.78 to take gold.

Victorian Mia Gross rose to the challenge of the outside lane and drawing Jamaican 100m champion Brianna Williams in her 200m semi-final. She got a great start , was third off the bend and held her form to the line for fourth in 23.86.

Despite it not being enough the progress to the final, she was understandably pleased with her race.

“That was amazing. I came off the bend and it was the best bend I have ever run in my life,” Gross said.

“I am super stoked. I haven’t run that quick in a long time. If conditions were alright I reckon that would have been a PB.”

Gross finished 12th overall and is expected to be added to the 4x100m relay team for the final.

Due to hamstring troubles Riley Day (QLD) did not take her place in the semi-finals of the 200m.

Australia were in heat 1 of the women’s 4x100m relay qualification.

The team of Nana Owusu-Afriyie (VIC), Kristie Edwards (NSW), Samantha Johnson (QLD) and Grace Brennan (ACT) were given the task to secure Australia’s place in the final with the top three and next two fastest qualifying progressing.

Owusu-Afriyie had a great lead-leg, holding British 100m bronze medallist, and Edwards ran a strong back straight to have the team in the mix with USA. Hurdler Johnson and long jumper Brennan then brought the team home with crisp changes and strong running.

Brennan crossed the line in a close battle for fifth and season best of 45.26 second, having run past the screaming Americans who dropped the baton in the final change when clearly leading. Germany came home strong and won in a superb 43.80, being a World U20 leading time.

This was the first racing experience at the championships for Owusu-Afriyie and Edwards, with Johnson (100m hurdles) and Brennan (long jump) having already competed. Riley Day (QLD) and Mia Gross (VIC) were left to prepare for their 200m semi-finals later in the session while Tamara Hotten (QLD), who was selected for the relay, has had hamstring troubles in the lead-up to the championships.

Tragedy struck the Australian men’s 4x100m team in the final change of their heat with Harrison Hunt (SA,) after a super bend, unable to get the baton to 100m semi-finalist Jake Doran (QLD). Resulting in disqualification for Australia.

To make matters worse, the young Australians were in the lead with Great Britain coming into the final change. Josh Azzopardi (NSW) and Tom Agnew (ACT) had run brilliantly to set-up the race. The British also couldn’t complete the change with Italy benefitting from the drama to take the win in a season’s best 39.75.

Germany were the standouts in heat 2 setting an U20 world lead time of 39.13 to upstage the Jamaicans (39.68). In the final heat, Japan led from the gun to run a season’s best 39.18 with the American men placing second in (39.49) and progress safely through to the final.

Despite the mishap, with the Australian relay squad also including 200m finalist Zane Branco (QLD) the future looks bright in this event and indeed Australian sprinting ranks in general.

Joycey out of sorts in hammer final

James Joycey (VIC) could not find his groove in the final of the men’s hammer with a mark of 63.92m, well short of his season’s best to place 12th overall.

The Victorian had a nervous start to the competition with 63.61m before fouling on his second attempt.

Coached by dad Bruce, the 18-year-old found himself in eleventh spot as he stepped into the ring for his third throw and needing a personal best to make the cut for a final three throws. It wasn’t to be as the youngster fell short of the 70.81m needed.

In the qualifying round, Joycey, one of only five Australian teenagers to throw beyond 70m mark, had thrown a season’s best 70.38m.