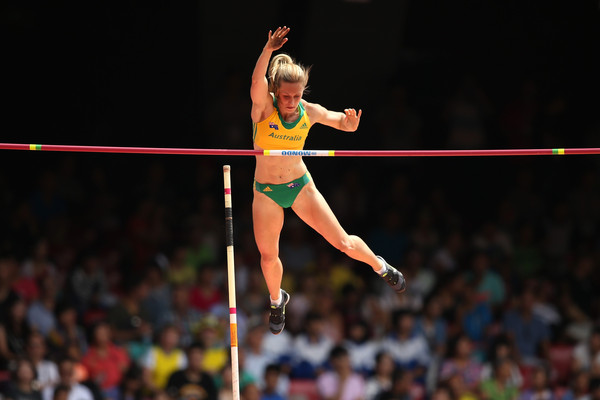 It’s hard to imagine not seeing Alana Boyd included in some type of headline across the Australian domestic season. On Thursday night at the Sunshine Coast we were again witness to world class pole vaulting – with Boyd clearing an exceptional 4.71m. The performance:

Boyd turns 32 in 2016, but there is clearly no sign that her performances are starting to diminish. Everything currently points to a tilt at something special both at the World Indoor Championships (March 17-20) and the Rio Olympics (August 12-21).

Note: Boyd went onto also clear 4.35m at the Denise Boyd meeting on January 17, placing second to New Zealand teenage sensation, Eliza McCartney (who set a NR of 4.65m). At the Sunshine Coast meeting Boyd had a first time clearance at 4.71m, and went onto have 3 failed attempts at a new PB of 4.81m.

Mitchell Continues on Path to Rio

It just looks to be a matter of time before Morgan Mitchell records an Olympic qualifier in her ‘pet’ event. On Saturday Mitchell recorded a 52.29s performance in the 400m at AV Shield Competition in Melbourne – going onto run 53.37s less than 6 hours later at the same meeting.

It was yet another sign of how far Mitchell has come since her breakthrough run at the 2014 National Championships (when she set her current PB of 52.22s). It showcased her strength and knowledge of an event that is built around both strength and speed – that hasn’t always been evident over the past 2 years. Physically the changes are clear for all to see – and now the times are suggesting that she will surely push Australia’s no.1 400m runner, Anneliese Rubie, all the way at the upcoming AA Tour Meetings.

In the same event in which Mitchell ran 52.22s, we also saw the impressive newcomer to 400m running Monica Brennan in action. Although she was a long way back in a time of 53.94s, Brennan will surely learn a lot from the race (in which she went sub 24 seconds for the first 200m).

In other action from the AV Shield Meeting in Melbourne – Round 9:

Watch out everybody there just could be another super fast sprint hurdler on the horizon. Well if her 60m speed has anything to do with it the Abbie Taddeo should be in for an excellent season over the 100m hurdles.

Taddeo recorded a very swift 7.44s (+0.0) over the 60m over the weekend. To put this into some perspective the Australian record (indoors) is 7.30s – set by Sally Pearson in 2009. The fastest World outdoor performance recorded in 2015 was recorded by none other than Shelley-Ann Fraser-Pryce (7.13s).

Taddeo has a best over the 100m hurdles of 13.32s, but we think that this be overhauled very quickly in 2016. (ed. We are certainly looking forward to seeing Taddeo go head to head with Pearson, Jenneke and Beahan over this coming summer – the women’s 100m hurdles should be a great event in 2016).

Taddeo went onto place 2nd behind Jess Thornton in the 100m, with Thornton producing a 12.05s into a stiff headwind of -1.4m/s.

In other results from the meeting:

In other flash results from Australia and overseas: